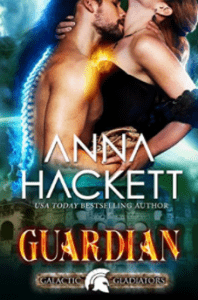 Time to share a few of the hot new releases in science fiction romance from March!

Anna Hackett published book 9 in her Galactic Gladiators series, entitled Guardian. I really enjoyed this new entry in the series, since the author changed things up a bit and added murder mysteries to the problems facing her characters on the wild world of Carthago. Since her human heroine is a police homicide detective, solving the case fits right into her wheelhouse. Here’s the blurb: Dayna Caplan has dedicated her life to protecting others…and now that she’s no longer a captive at the desert arena of Zaabha, she desperately wants to help find the last of the other human women who were abducted by the Thraxians. But now she has to deal with the intense hunger and powerful new abilities the alien living inside grants her…and the person forcing her to confront her new reality is the cool, enigmatic, and far-too-attractive Rillian.

Rillian has wheeled and dealed his way to the top of the food chain on the lawless desert world of Carthago. He lets no one close and keeps iron-clad control on his life…which is vital to keeping the lethal power within him in check. But one human woman–tough, stubborn, and fascinating Dayna–works her way under his skin, and he finds himself obsessed with protecting her. But as dead bodies start appearing in his casino as a deadly warning, dangers are closing in on them.

With their allies, the gladiators from the House of Galen, Rillian and Dayna find themselves fighting for survival on every front. On the hunt to find Zaabha and the lost humans, they will face murderers, slavers, and the deadliest of all challenges…the aliens living within them. 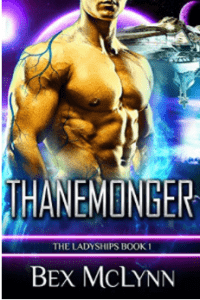 Newcomer to writing SFR Bex McLynn kicked off a promising new series The Ladyships, with Thanemonger, an action packed tale. Here’s the story: She won’t give up. He’ll never surrender. Will their need for each other overcome their determination?

Zver is on a rampage. A rival thane has kidnapped his son and sabotaged his work for the Dominion. But he won’t fail. He won’t fall. They call him Thanemonger for a reason. Not only will he retrieve his son, but he’ll seize the battleship he’s wanted for years and cement his superior status in the Dominion. Just as he executes his ruthless plan, an alluring human woman appears and changes everything.

Seph survived being abducted by aliens, and now she’s determined to get home to her young son. Her plan: find a spaceship, return to Earth. Simple, but then she meets the domineering Thanemonger. He offers her sanctuary, but only if she complies with his demands. Now Seph must find a way to fall in line without falling for the sexy alien who has sworn to see her safely home. 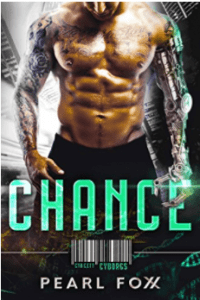 Cyborgs are always a favorite trope in the SFR world. Pearl Foxx keeps the heat level high in her new release Chance (Cyn City Cyborgs Book 1). The plot unfolds thusly: A cyborg with a mysterious and dangerous past.

A naive girl fleeing the dying farmlands to forge her own future.

Chance has fought his entire life, first for survival in the streets of Cyn City and later for money and prestige in the underground Cyborg Fight League. His fists and cybernetic arm have solved almost every problem he’s ever faced, except for love. After losing the love of his life, he never thought he’d find someone again.

Verity left behind everything she knows to start a new future in Cyn City. But her Ecovangalit upbringing left her unprepared for the hard realities of life amongst the criminals and cyborgs. When a dangerous cyborg with a bad reputation proves to be the only person she can trust, can she lower her walls enough to let him in?

As Verity finds herself in debt to the wrong kind of man who will sell her body as fast as he will sell her soul, Chance is the only one who can clear her ledger, but only if he’ll fight in the Cyborg Underground Circuit again.

Is Chance strong enough to win the only fight that ever mattered? 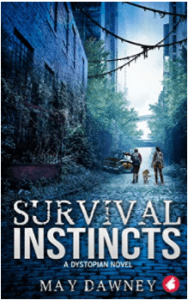 For a change of pace, May Dawney’s Survival Instincts: A Dystopian Novel really delivers. The blurb: Civilization ended long before Lynn Tanner was born. Wild animals roam the streets, but mankind is still the biggest threat to a woman alone in the ruins of a world reclaimed by nature. Lynn survives by sleeping with one eye open at all times and trusting no one but her dog.

When she is forced to go on a dangerous journey through the concrete jungle of New York City, Lynn does all she can to scheme her way to safety. Her guard, Dani Wilson, won’t be played that easily, however. As their lives become entwined, Lynn finds herself developing feelings for Dani and is forced to find the answer to the question that scares her most: is staying alone really the best way to survive?

Fast-paced and full of adventure, Survival Instincts introduces a post-war dystopian world where the only person you can rely on is yourself…unless you fall in love. 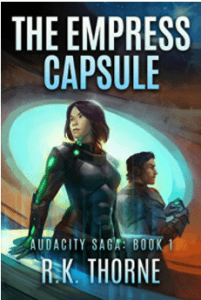 R. K. Thorne’s The Empress Capsule is the start of an intriguing new series, the Audacity Saga and here’s the description: PRODIGY. DESERTER. COMMANDER. At 22, Commander Ellen Ryu is a little young to be “retired.” Yet she’s planned—and bled in—more battles than veterans twice her age. And, well, she didn’t exactly retire so much as desert. Betrayed by her superiors, turned into a science experiment, and nearly driven insane, Ellen seized the chance for freedom when a shadowy organization offered her a ship of her own and an elite, all-female crew. She’s got a new mission now: get revenge on the scientist who almost destroyed her. Nobody is going to get in her way this time. Especially not the merc who’s just shown up at her cargo hatch, looking to hitch a ride.

MERCENARY. CONVICT. RENEGADE. In the middle of an op gone wrong, cyborg mercenary Kael Sidassian gets stuck with a mission he can’t refuse: carry a capsule to safety, the contents of which would bring the galaxy down on his head if anyone knew what was inside. But he’s also got damaged hardware in his head and a plan to escape from the barbaric merc company that forcibly conscripted him over a decade ago. So when a humanitarian ship grants him passage, he thanks his lucky stars for a job that’ll solve all his problems at once. That is, if the attachment he’s forming to the ship’s commander—one that goes way beyond duty and loyalty—doesn’t get in the way.

As a new threat rises, the prodigy and the renegade discover far more in common than they ever thought possible. Now both their missions will have to wait, because if they aren’t audacious enough to work together, they’ll never survive what’s coming for them. 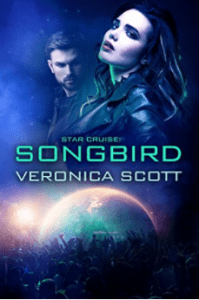 As for me, I released Star Cruise: Songbird, which was my novella from the no longer available Pets In Space anthology. I had so much fun writing a rock star romance set in the future! Here’s the story: Grant Barton, a Security Officer on the Nebula Zephyr, is less than thrilled with his current assignment to guard an Interstellar singing sensation while she’s on board the ship. It doesn’t help that he and his military war bird Valkyr are dealing with their recent separation from the Sectors Special Forces and uncertainty over their future, with their own planet in ruins.

Karissa Dawnstar is on top of the charts and seemingly has it all – talent, fame, fortune and devoted fans, but behind her brave smile and upbeat lyrics she hides an aching heart. When a publicity stunt goes wrong, Karissa finds herself in the arms of the security officer assigned to protect her – and discovers a mutual attraction she can’t ignore.

Trouble continues to plague the pair, driving a wedge between them and leaving Grant certain that Karissa is in more danger than she realizes, from overzealous fans and her own management. Grant is determined to protect Karissa whether she wants his help or not. Can he discover the truth behind what’s going on before he loses Karissa or is there someone else plotting to keep them apart – permanently?

What new science fiction romance reads have you found lately?

A con report from deep in the heart of Rustycon 31