In this week’s viewing: Hakumei and Mikochi learn what fishing is really about, Hakyu Hoshin Engi turns into character drama, and more! 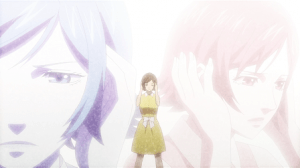 Kokkoku finale – There has been the occasional stumble, but Kokkoku knocks it out of the park here, ending the story in ways both anticipated and unanticipated. It may feel a bit deus ex machina at the very end, but it did warn us all the way back in episode 1 that there was at least one additional person out there with Stasis-related powers. In fact, if you go back and check, it turns out to have been a flashforward to this episode.

Sagawa gets his wish, in a way; the Specters ate his brain to keep him alive, so the person responsible for all the turmoil and death is gone. His reincarnation will be immortal, and in a lesser story it would be strongly hinted that he will grow up to be the perfect match for the Founder’s widow, but she seems like she’s doing fine as it is. Juri gets her wish, reunited with a family which is now taking a more positive outlook on life. Even the viewers get a happy ending, with the finale ditching the regular ending sequence.

But we gotta talk about that ending sequence. As terrific as the story itself has been, it is impossible to escape the shadow of the porn shoot tacked on to every episode except the last. It insults every viewer who isn’t a straight man by telling them they’re not meant to be the audience. It insults straight men by insinuating that they lack the mental capacity to understand the show and need something else to keep them watching. It’s like reading a great book that someone has thrown up on. No matter how good the book itself is, it’s impossible to keep the stench from coloring the experience.

Fortunately, there is a way around this. If this show has been faithful to its source material— and anime almost always is— then I can unreservedly recommend the manga, which is available in English. 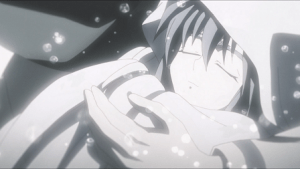 Hakyu Hoshin Engi #10 – Taikōbō didn’t put on a magician’s hat last time just because he wanted to play with cards. He was putting some serious effort into misdirecting his opponent’s attention while he searched for his real body. Gyakutei finishes the plan easily, coincidentally giving him a turn at being the hero just before he gets killed off.

Yōzen is a powerful bait for Ōtenkun’s trap, not just because he’s a comrade and close friend. As someone who can not just take on the appearance of other people, but is now able to duplicate their powers, as we saw just before he snuck off to Kingo Island, he’s one of the most powerful people around. The side that controls him has greatly improved its odds of winning.

Ōtenkun’s plan is really aimed at neutralizing Yōzen, trying to either make him feel abandoned again or devastate him with the death of someone dear to him. But Gyakutei goes as a willing sacrifice, refuses to leave Yōzen behind, and is able to remind him that he has been loved at Konron Mountain, and so brings him back to the side of good. Yōzen is still going to be unhappy, but not broken. Ōtenkun has the small satisfaction of hurting Yōzen’s by killing his father figure, but he’s likely to be on the receiving end of some painful revenge shortly. 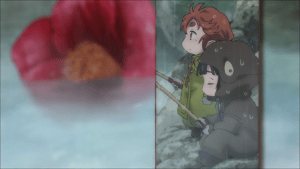 Hakumei and Mikochi #11 – Hakumei wants to go visit a lake well-known for its fishing, a whole overnight train journey away. This means… it’s steampunk time! Not the whirling-gears kind, the real historical coal-fired kind with clouds of smoke and lots of clunky wrought-iron and uncomfortable second-class seats. Rather than an excuse for lots of landscape shots, as most shows would handle it, it’s all focused on the passenger’s experience— a long time sitting, with nothing to do but eat, read, and occasionally chat with a conductor.

At Lake Kanokan, Mikochi had plainly been expecting a chance to go wander around and look at the scenery, but the rain means she’s trapped with Hakumei and a fellow fishing enthusiast and their enthusiasm. As unassertive as she usually is, Mikochi is finally, after hours of being rained on and staring at the lake being rained on, able to speak up and suggest that maybe she’s… just not into fishing and never will be. Well, until she experiences the maddening thrill of The One That Got Away. And there is nothing Mikochi can’t learn to do once she’s fired up about it.

There turns out to be one more episode coming, so bring it on! I’m still hoping for a little more clarity on their exact relationship, but not expecting it. 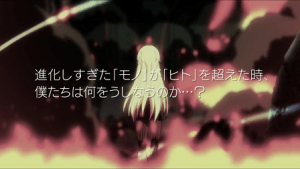 Beatless #02 – Yup, it was another recap episode. Points highlighted in the review, which means they will probably be on the quiz: Methode is the villain, hIEs have been smarter than humans for at least 50 years, robots as people vs. tools is an issue people are arguing about a lot.