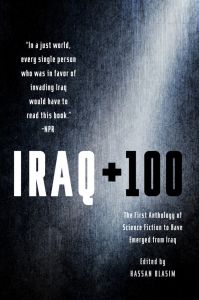 In what turns out to be a cultural lesson in the literary art form, IRAQ + 100 from Tor Books is an insightful look at a future that only those who live or had lived in the turmoil laidened country. Billed as “The first anthology of science fiction to have emerge from Iraq,” readers will be both entertained by the vast collection of ideas and educated by what these visionaries presume the future holds for them and the country.

Edited by Hassan Blasim who provides an emotional introduction (translated by Jonathan Wright), readers will understand firsthand the sensitive nature of the subject and appreciate the commitment and challenges each contributor endured.

The writers were quarried to take the readers into the future, 100 years after their dialectic experiences of foreign invasion. This is about a world many of us who live outside this region could never imagine. With contributions from multiple generations of writers who have a variety of revelations coming from numerous locations within the borders, this collection is about as diverse a perspective one can get from those closest to the scene. Some of these writers have moved on while others still remain in this world today, but the context and heartfelt sentiment remains loyal to a future perspective full of cultural relevance and the impact of uninvited foreign influences.

Works included in the anthology:

The Gardens of Babylon by Hassan Blasium (translated by Jonathan Wright)

The Corporal by Ali Bader (translated by Elisabeth Faquette)

The Worker by Diaa Fubaili (translated by Andrew Leber)

IRAQ + 100 is not just “The First Anthology of Science Fiction to Have Emerged from Iraq” from Tor Books, but an emotional view of a distant future through the eyes of writers who accepted the challenge of sharing their dreams and fears.