End of the year SF Romance novels to inspire moments under the mistletoe. 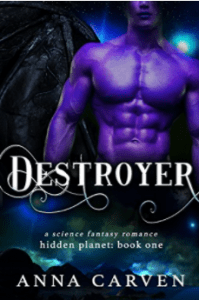 News of a few more new releases in science fiction romance for the last weeks of the year!

Author Anna Carven of the Dark Planet Warriors series has kicked off a new series with Destroyer (Hidden Planet Book 1), although she’s promised there will be more action in the Dark Planet universe ahead as well. Here’s the plot for Destroyer: A hair-raising ambush.

A distant, uncharted part of the Universe. 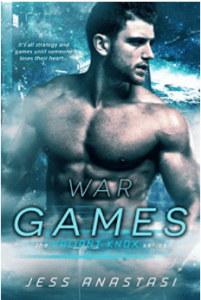 Jess Anastasi continued her well-received Valiant Knox series with book four, War Games. The synopsis: When one of her pilots is shot down behind enemy lines, Lieutenant Theresa Brenner will stop at nothing to save her before she’s captured and tortured, even if it means being part of the dirtside team led by Colonel Cameron McAllister. Bren might respect the way the colonel commands his men, but she’ll never trust Cam—no matter how charming he is—because he was responsible for her brother’s death.

Colonel Cameron McAllister has a covert mission behind enemy lines to team with the Ilari rebels and overthrow the bloodthirsty dictator who’s torn their planet apart. The last thing he needs is to get sidetracked searching for a downed pilot, especially since it means having Lieutenant Theresa Brenner tag along. Not only doesn’t the frosty pilot have the ground game to keep up with his seasoned group, she’s a potential distraction with all those gorgeous blond curls of hers—and she might be just like her brother, whose foolhardiness got his men killed.

Robin D. Owens returned to her Celta series and two intriguing characters we’ve seen in other books but who now get to stand front and center in Heart Sight.  The book blurb: Muin “Vinni” T’Vine has been the prophet of Celta since he was six years old. A unique and lonely child, his strong psi power made most people wary of him. But now that he’s older, he’s ready to marry and protect the girl he’s known was his HeartMate for years.

Avellana isn’t as fragile as Vinni believes…nor as compliant. She fights to be considered Vinni’s equal and a strong member of her Family and community. Both of them have kept Avellana’s main power secret for over a decade.

But rumors of her strange psi talent are spreading, and Vinni is experiencing premonitions of danger to Avellana—even from the highest people of the land. When the whispers become threats, Vinni and Avellana must discover and defeat their secret enemies before they can finally claim happiness together. 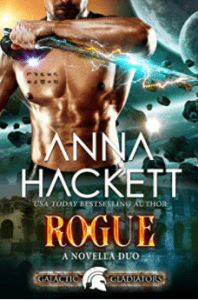 Anna Hackett put out a novella duology as book eight in her Galactic Gladiators series, entitled Rogue.  The novellas deal with two different rogues, as you’ll see from the summaries: Information Rogue: arrogant information merchant Zhim doesn’t know what hits him when he collides with feisty human hacker Ryan.

Rescued by the humans and gladiators from the House of Galen, Ryan Nagano is working hard to piece her life back together. Her priorities are conquering her anxiety, recovering from her captivity, and using her exceptional computer skills to help the House of Galen decrypt alien data that could reveal the location of other abducted humans. That’s all she’s focused on. But when she needs help, she finds herself having to work with arrogant genius Zhim…and discovers that the two of them redefine the word explosive.

Zhim thrives on the need to uncover information and ensure his wealthy, carefully constructed life is exactly as he wants it. Then one infuriating menace of a woman blasts into his life. Ryan matches him skill for skill, drives him crazy, and worms her way under his skin. But forced to take her deep into Kor Magma’s shadowy hacker underworld, Zhim soon learns exactly what he’s willing to risk to keep Ryan safe.

Neve Haynes survived her abduction through grit and determination. She’s always made her own way through life, depends on no one, and is determined to achieve her own personal mission. So as she sneaks out of the House of Galen, the last thing she needs is help in the form of a tawny-haired, lean-hipped caravan master with more confidence and swagger than any man she’s met before.

Corsair is a man of the desert and leader of the Corsair Caravan. He listens to his gut and something about Neve draws him in. He can’t let her go off and get herself killed, but she’s the most skittish, strongest woman he’s ever met. As they trek deep into the desert on a dangerous mission to find a map to an infamous desert arena, they will fight side by side and be forced to depend only on each other to survive. And in Carthago’s desert sands, they will uncover a desire that burns hotter than the desert sun. 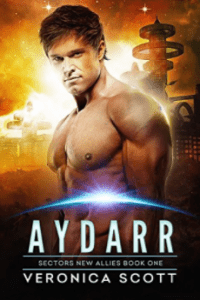 Yours truly kicked off a new series too, starting with Aydarr (A Badari Warriors SciFi Romance Novel): Sectors New Allies. Here’s the storyline for the series opener: Jill Garrison, a maintenance tech at the Sectors Amarcae 7 colony, goes to sleep one night as usual only to wake up in her nightgown stranded in the middle of a forest on an unknown world. There’s no time to think as she’s stalked by carnivorous predators and rescued by genetically engineered warriors calling themselves the Badari. Turns out they and she, along with her whole colony, are now prisoners of the Khagrish, a ruthless race of alien scientists. Working for enemies of the Sectors, the Khagrish have created the Badari to be super soldiers.

Aydarr, the Badari alpha, isn’t sure he can trust Jill but his attraction to her is undeniable. He impulsively claims her as his mate to prevent her death at the hands of the Khagrish.

Can he continue to protect her from the experiments already underway? Will his claiming her put his pack in jeopardy from their alien masters?

As Jill searches for a way to rescue her fellow humans and get them all to safety, she finds herself falling for Aydarr, despite the secrets he’s keeping. She has a few of her own.

The situation becomes dire when Aydarr and his pack are sent offplanet on a mission, leaving Jill unprotected, prey for the senior scientist. Can she escape the experiments he has in mind for her? Will she be able to thwart the Khagrish plans and liberate humans and Badari alike? How will she and Aydarr reunite?

Best Wishes for a happy holiday season full of good books and time to read!

It’s award season. so great ready to cheer on your favorites (and listen to some long acceptance speeches) for the 2016 Science Fiction Romance Galaxy Awards!

Bieber to go to Space! Who should be Next?