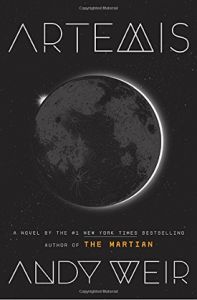 As most will recall, Weir is the author of The Martian, a groundbreaking first indie novel quickly made into a successful film directed by Ridley Scott and starring Matt Damon as Mark Watney, the sarcastic, gallows humor trash talking stranded astronaut.

I had the opportunity to interview Weir for Amazing Stories (here) and have exchanged emails with the author on several occasions and, if the talks he has given are any indication, he is as interesting in person as he is in interview.

I was really hoping that Weir would manage to turn out another page turner like The Martian, but sadly this is not to be.  And here’s an interesting note for indie authors:  I think it was the writing process that has contributed to, if not actually responsible for, the difference.

Weir was under no scheduling pressures other than his own. No contract to perform. No external considerations regarding marketing, massaging for film options, nothing and no one to satisfy other than himself and his core audience, who were along for the ride.

It was, truth be told, going to be difficult, if nigh on impossible, for Weir to turn out a second novel that would surpass the success and acceptance of The Martian.  In genre land, the number of first novels that make the NYT Best Seller list AND have gone on to become blockbuster films is a very small number.  There must be one or two, but off hand I can’t think of what they might be (reader’s this is your cue).

Two elements of The Martian excited the SF community:  fast-paced action firmly grounded in the science and technology of our day and an unrelentingly positive outlook regarding manned space exploration, science and technology.  Further, the main character, Mark Watney, was a great character.  And herein lies one of the major differences between these two books:  Watney had to cope with a situation not of his own making, while the primary character in Artemis, Jasmine ‘Jazz” Bashara, is the root cause of all of the problems she encounters throughout the story.

It seems to me that there’s a fundamental psychological difference in the reception of a hero who deals with circumstances that are thrust upon them, versus a hero who is essentially running around cleaning up her own mess.  We felt a great deal of sympathy for Watney, while Jazz can be dismissed as a brat.

Here’s the set-up:  Artemis is the one and only Moon colony, established by the Kenyan Space Program.  The colony makes its living through space tourism and the manufacture of oxygen, aluminum and silicon.  Jazz, a teenaged girl of Saudi Arabian descent lives at the lower levels of the Lunar society, operating a delivery service and smuggling in contraband from Earth while attempting to obtain her EVA license (which will allow her to guide tours, a much better paying job), when her avarice gets the better of her and she agrees to take on a job that could have wide-ranging effects on both the political and economic structures of the colony.

While interesting, Weir’s lunar colony seems far more contrived than the NASA base on Mars.  To put it another way, the bones of the contrivance are more visible in Artemis.  At one point we are introduced to a lunar rover that just so happens to pretty much have an answer for every unanticipated need.  After the third or fourth deus ex moment, I was reminded of Harry Harrison’s Professor Coypu from the Stainless Steel Rat series:  no matter what piece of technology Slippery Jim may need, the Professor has already just invented it.

There is a recurring gag featuring a high-tech condom invented by one of Jazz’s many acquaintances;  I’ve got a 15 year old step-granddaughter and, while I suspect that she would not normally bring such things up in her conversations with her step-grandfather, I also strongly suspect that she doesn’t obsess the way that Jazz does.  There are quite a few passages that had me cringing, reminding me of those scenes where a guy finds himself in a female body and his first thought is “boobies!  I can play with them any time I want!”

Artemis is also not a page turner.  Pleasant enough, but I found it fairly easy to put down, most likely because Weir has not managed to create the kind of tension present in The Martian, which may be somewhat The Martian’s fault:  there was some doubt about Watney’s survival (especially starting about two-thirds in), but we’ve seen the conclusion to that adventure, which leaves no doubt that Jazz will win through in the end of Artemis.  With that foreknowledge in hand, the novel Artemis becomes an exercise in interesting speculative engineering problems, rather than a question of the character’s survival.

Weir had a near impossible task to pull off, to best (or equal) his very first offering and it is no surprise that he hasn’t quite pulled it off.  Acceptable, enjoyable, certainly worth reading if you are interested in following the career of an author who may be this generation’s Crichton (although a pro-science Crichton, a very good thing), but if you are expecting the same kind of breathless, exciting read as The Martian, you’ll be disappointed.