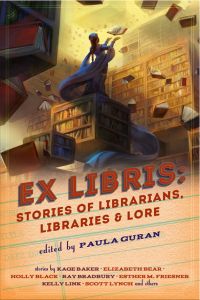 Someone once asked where the best place to hide would be during an Armageddon. The same answer applies to the best location for a lair if you wanted to be the most powerful evil villain. My answer – the Library. Knowledge brings power, and in an apocalyptic event, odds are pretty good that the interweb will be but a distant memory. If you can’t find what you need at a library, you sure as heck should be able to find out who, what, where, when and how to get it.

Perhaps the most compelling yet saddest aspect of a library is the realization that you will never be able to read everything it contains. And there lies the dilemma. With the literary world at your fingertips, imagine the works you might miss.

EX LIBRIS: Stories of Librarians, Libraries & Lore takes this into consideration. Throw in iconic names like Kage Baker, Ray Bradbury, and Jack McDevitt, and you have a wealth of library treasures to be found within the walls of this anthology from Prime Books and brilliantly edited by Paula Guran. Each story involves some aspect of or about the library institution. But at least here, you have an opportunity to experience each one without fear of missing one.

Included in this collection:

In the House of the Seven Librarians by Ellen Klages (Firebirds Rising:
An Anthology of Original Science Fiction & Fantasy, 2006, ed. Sharyn November)

Death and the Librarian by Esther M. Friesner (Asimov’s, December 1994)

The King of the Big Night Hours by Richard Bowes (Subterranean, Issue #7, 2007)

Those Who Watch by Ruthanna Emrys (The Mammoth Book of Cthulhu, 2016, ed. Paula Guran)

Special Collections by Norman Partridge (The Library of the Dead, 2015, ed.
Michael Bailey)

Exchange by Ray Bradbury (Quicker Than the Eye, 1996)

Magic of Beginners by Kelly Link (Magic for Beginners, 2005)

The Librarian’s Dilemma by E. Saxey (The Journal of
Unlikely Academia, October 2015)

This vast assemblage is both diverse and inspirational. Like the soldier’s experience in Ray Bradbury’s emotionally complex Exchange, each of these little pieces take the reader’s imagination to places where they wouldn’t expect and deliver messages much deeper than anticipated. EX LIBRIS is the quintessential treasure that is a library.

But what if these stories were not available? A frightening thought. Jack McDevitt gives us a different perspective of works we might never read in The Forte Moxie Branch, by considering that which is unpublished. Sure, we can’t read everything the library has to offer, but what about the pieces that don’t even make it to the library? Lucky for us, all of the tales in EX LIBRIS: Stories of Librarians, Libraries & Lore have been published, and now they are all ready and available in this one sweet anthology.

Get your library card out, because you’re going to want to check this one out.