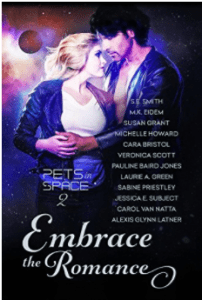 If you’ve been thinking about trying science fiction romance but preferred to sample a variety of authors rather than diving headfirst into one book, have I got a good week going on for you! There are two SFR anthologies out as of October 10th, with a total of 25 authors and 25 all new stories.

(Full disclosure, I’m the co-organizer of Embrace the Romance: Pets in Space 2, which supports the charity Hero-Dogs, Inc., and I also wrote a novella for the book.)

It’s always so much fun to give a group of authors the same writing prompt and see how vastly different the stories will turn out to be. For Embrace the Romance: Pets In Space 2, we asked each author to write us a good solid science fiction romance tale with a heroic pet incorporated into the action. As I explained to someone, for example, think of “Lassie, Timmy fell into the black hole so go get help, girl!” or Ripley with Jonesy the cat in the movie Alien. Or going even further back, the old Eric Frank Russell tale Allamagoosa about the “offog”. Or any of the Andre Norton books featuring telepathic animals working alongside humans.

This is our second year doing a limited edition anthology around the heroic pets theme – last year’s book received a Library Journal award, which was exciting and we were also able to give the charity a good-sized donation. So we returned with a fresh anthology lineup in 2017!

For the Cosmic Cabaret anthology, author Jayne Fury, one of the organizers, gave participants a fully envisioned luxury spaceliner and some general world building, and basically said, write a story in this environment, featuring the cabaret in some fashion. Lots of fun adventures ensued.

Here’s the lineup of authors and stories for Embrace the Romance: Pets In Space 2. Note that although the authors chose to set their stories in existing universes from their various series, these stories are all completely standalone:

A Novella in the Dragon Lords of Valdier Series by S.E. Smith (New York Times/USA Today Bestselling Author): A mature human woman discovers love on an alien world and she will do whatever it takes to keep the alien dragon shifter that has captured her heart – even if it means fighting dirty.

A Novella in the Tornian Series by M.K. Eidem (USA Today Bestselling Author): Love, faith, and kindness guide two young girls when they find an injured raptor in their garden, unaware of the far-reaching consequences their actions will have.

The Prince, the Pilot, and the Puppy

(“Star Puppy”) A Novella in The Star Series by Susan Grant (New York Times/USA Today Bestselling, and RITA Award Winning Author): A handsome prince gets a little help from a rescued puppy when he tries to convince a talented starfighter pilot that she is the one for him.

By Michelle Howard: A former soldier and a young woman must work together with a new four-legged friend to survive after an old enemy finds them.

Rescued by the Cyborg

A Novella in the Cy-Ops Sci-fi Romance Series by Cara Bristol (USA Today Bestselling Author): A kitten named Mittzi is the key to helping a cyborg agent save the woman he loves…

A Novella in The Sectors SF Romance Series by Veronica Scott:A security officer aboard a spaceship finds his job complicated by his attraction to the interstellar rock singer he is assigned to protect and the alien eagle he has inherited.

A Novella in the Project Enterprise Series by Pauline Baird Jones: Time is running out for a time traveling rebel, her parrot partner, and the unsuspecting USAF Engineer they encounter.

A Novella in the Inherited Stars Universe Series by Laurie A. Green: A commander of a spaceship faces the toughest decision of his life when he vows to protect the woman and her StarDog that he is escorting through a dangerous section of space.

A Novella in the Alien Attachments Series by Sabine Priestley: A scientist must decide if she can trust the man who once betrayed her if she is to help his sentient com unit gain a physical form.

Gib and the Tibbar

A Novella in the Galactic Defenders Series by Jessica E. Subject: A fierce alien warrior receives help from a furry friend to convince the woman he loves that she is the one for him.

A Novella in the Central Galactic Concordance Series by Carol Van Natta: A cargo of designer pets forces a damaged veterinarian and a fugitive elite forces veteran to work together to protect the animals from greedy mercenaries.

A Novella in the Aeon’s Legacy Series by Alexis Glynn Latner: A mysterious alien pet becomes the unlikely and unconventional defender of a remote mining station while the station manager and an interstellar auditor try to work out their mutual attraction – and stay out of the casualty count. 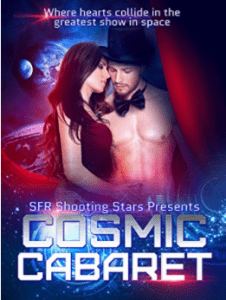 And the Cosmic Cabaret’s blurb and story loglines:

Join us aboard Blue Star Line’s crown jewel, the LS Quantum. Thirteen USA Today, Amazon best-selling, award-winning speculative fiction romance authors deliver their twists on tales set in the dance halls and clubs of this luxury starship as it travels through space and time.

Chaz Jaguari, inter-galactic singing star, hides out until a sexy Tygress wanders into his lair and brings the jaded star roaring back to life.

Astronomer Dr. Andrew Mann becomes enthralled with a performing particle shifter. Stella wants to trust the scientist, but she has a secret, and she’s scared.

Midnight at Andromeda’s by Tessa McFionn

Astra Faraday ran from a life of piracy. Dr. Zane Jones signed on to the ship to escape a former life – one that was killing him. When her mentor is murdered their pasts collide as they solve the crime and fall in love.

Caleb hides his disability behind his job as an exotic dancer, keeping women at arm’s length. Then he meets Adara. How much will they risk to find their dreams together?

A Dance of Fallen Stars by Kat Vancil

Notorious playboy Kealan Corkoran’s been branded an illegal stowaway light-years from home. His one chance to get out of this mess: working under the impassioned daemon choreographer who got him into it.

Bodyguard Vordol Silveira vows to be the best, keeping his heart disengaged. Pitannah Lorento dreams of winning the intergalactic burlesque competition. When she’s threatened, Vordol’s vow is put to the test.

Hide and Peek by Blaire Edens

Religious zealots storm the burlesque club where Suzy headlines, forcing her to run, leaving behind a precious possession. Davell hooks up with Suzy to catch the perps, her actions set off a chain of dangerous events.

Educated by the Master by Cailin Briste

Take one talkative novice to kink. Combine with a master who prefers the silence of meditation. Bake on high heat at the Cosmic Cabaret. Luscious.

Comets and Caviar by Jenna Lincoln

Agent Sabrina Hawthorne of the Inter-Galactic Alliance thinks she’ll track a traitor with her brother. Instead, she’s partnered to his overbearing, stick-in-the-mud friend, Dayor Keitos.

So if you were going to want a pet in your science fiction, or to travel into space with you, what would it be?