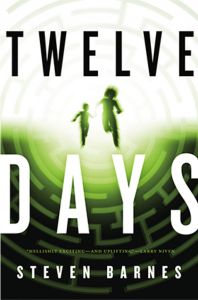 The new hardcover novel Twelve Days by Steven Barnes from Tor Books went on sale June 27, 2017. Billed as a “paranormal thriller from a master storyteller,” the book is a good introduction to those not familiar with the author’s work. A powerful stand-alone mystery, the complex story does leave just a hint of unresolved elements in case the writer decides to return to it.

The small world of Olympia Dorsey is growing in dangerous proportions. She is a journalist struggling to balance a hectic career with the trials and tribulations of a broken family, which centers around a sharp-tongued teenaged daughter and an autistic son named Hannibal. A chance meeting with the strange sect leader Madame Gupta may offer an unexpected connection between the boy and his mother, but the results could also bring new dangers.

A terrorist group threatening the globe with cataclysmic horror is behind a series of assassinations of a number of the world’s powerful leaders. As each nation witnesses the fragility of society as the possibility of the breakdown of modern civilization looks inevitable, one soldier stands in their way. Terry Nicolas was once a member of an effective Special Forces unit. But when he rejoins his old team with the dishonorable intentions of pulling an implausible robbery, the fine line between Honor and Country is blurred as he suddenly realizes the other dangers that threaten mankind and the true cost of heroism.

Twelve Days is billed as a “paranormal thriller” which is why it ended up on Amazing Stories’ doorstep. But in reality, this book is more of a social examination of the effects of terrorism on modern civilization and the intensity of humanity’s resolve to combat it. THAT is what makes this a successful and worthwhile story. But with such a strong metaphysical approach, the paranormal element seemed somewhat forced and out of place at times. Given the complexity of the characters as they interacted with each other and the fast tempo of the plot, most readers would be hard pressed to be distracted by the author’s speculative influence. Though author Barnes has established himself as a successful science fiction writer, booksellers may want to think twice before categorizing the genre this way.

Steven Barnes is a New York Times bestselling author with work in both screen and print. His 1979 collaboration with Larry Niven on the novelette “The Locusts” first appeared in the June 1979 Vol XCIX, No. 6 issue of Analog Science Fiction / Science Fact and earned the pair a Hugo Award nomination.

Twelve Days by Steven Barnes is a thriller, pure and simple. Maybe not in a genre typical of some of the author’s other works, this book is still a good measure for new readers to discover his writing style and skill.