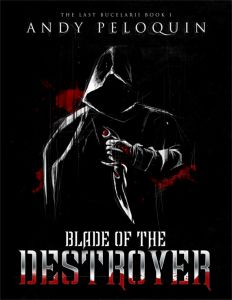 Blade of the Destroyer (August 21, 2015) is the first book in author Andy Peloquin’s dark fantasy series The Last Bucelarii, which is followed by the second book Lament of the Fallen (August 1, 2016) and the latest installment Gateway to the Past (March 31,2017).

This is what you might consider an epic journey of discovery set in a dark, violent world of malevolence…and the antagonists are just as vile. The author does not skimp on the bloody gore, but the macabre images never seem over the top and the violence always feels well sculpted to the action, somewhat necessary for such a dark setting. Add a raw dialect for a largely diverse cast of characters (so many that the names tend to get confusing at times), and this series promises to be an interesting mixture of fantasy and horror with a lot of possibilities.

The hero of the story is known as “The Hunter,” an assassin for hire guided by a demented blade who shows no discrimination in regards to target, as long as the rewarding purse meets his requirement. Well, that’s what the Hunter wants his suitors to believe, anyway. With such a complex character who shows many faces, both internally to himself as well many disguises to other characters, readers might get easily discouraged as his true identity always seems in question. But if you stick with it, you’ll eventually realize that the theme of this story is in fact the discovery of who and what this being really is.

Though deadly swift with a sword, the Hunter’s predominant blade is a demonic dagger called Soulhunger, an evil presence whose thirst for blood guides the assassin as he searches for victims. When Soulhunger prods the Hunter with its demented banter through a subliminal voice in his head, it would be easy to question the bearer’s sanity. This disturbing twist is yet another layer in the Hunter’s character development that seems to make the pages turn quicker.

Billed as a dark fantasy, this story is by no means a fairy tale adventure. There are magical elements that should please some readers looking for that mystic edge, but the overall theme is more of a supernatural mystery. With fresh religious undertones mixed with a complex plotline that draws on many of the key literary points of a hero’s journey, this series could also be categorized as a mythological adventure.

If you’re one who enjoys the story of a flawed hero, Blade of the Destroyer by Andy Peloquin certainly fits that bill.