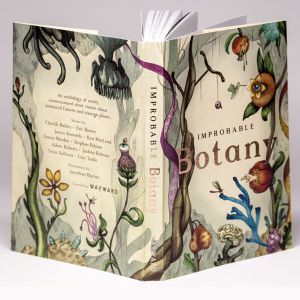 I have recently edited a new anthology of science fiction and fantasy stories about fantastical flora. The book, Improbable Botany, features authors who between them have won the Arthur C Clarke, British Science Fiction Association, John W. Campbell Memorial, Philip K. Dick, Nebula and Prometheus Awards, and been nominated for many more. The writers are: Cherith Baldry (co-author of the New York Times best-selling Warrior Cats series), Eric Brown (The Kings of Eternity, the Langham and Dupré crime novels, the most recent of which is Murder Take Three), Ken MacLeod (Intrusion, The Corporation Wars), Simon Morden (the Metrozone series, Down Station / The White City), Adam Roberts (The Real-Town Murders, The Thing Itself), James Kennedy (The Order of Odd-Fish), Stephen Palmer (The Factory Girl Trilogy, Memory Seed, Beautiful Intelligence), Justina Robson (The Quantum Gravity series, Natural History, Switch), Tricia Sullivan (Occupy Me, Dreaming in Smoke, Maul), and Lisa Tuttle (The Curious Affair of the Somnambulist and the Psychic Thief, The Mysteries, Windhaven (with George RR Martin)).

As part of the project I have interviewed all ten of the contributing authors, not just about Improbable Botany but about their writing in general and much more besides. Below is my interview with Ken MacLeod. Check back soon for more interviews. (Note, this interview was conducted last year, just before the UK referendum on membership of the European Union).

Improbable Botany is being published by Wayward, a London-based landscape, art and architecture practice, and funded via Kickstarter. The book is illustrated by Jonathan Burton (The Folio Society, Penguin Books, Random House). One of the Kickstarter bonuses is a free e-book which will include all the interviews, though they will also be published individually in various places. The only time they will ever appear all together is in the Kickstarter e-book. The Kickstarter also offers the opportunity to acquire A2-sized art prints of all six of Jonathan Burton’s interior illustrations, as well as his breathtaking cover art.

Gary Dalkin for Amazing Stories: Your contribution to Improbable Botany, ‘The Bicycle-Frame Tree Plantation Manager’s Redundancy’ is a stand-alone story set in the same world as your novel Intrusion. Heather at Wayward was especially intrigued by the bicycle-frame trees and other synthetic biology elements in the book, but just how did the story germinate?

Ken MacLeod: The bicycle-frame trees and synthetic biology aspects of Intrusion had been inspired by art projects by Daisy Ginsberg and James King, who visited the Genomics Forum in 2010 and gave slide-show presentations of their work including Daisy’s Growth Assembly.

It struck me that there was more to be done in that world, exploring its botanical manufactures and soft totalitarianism, and that story was the result.

GD: Do you think you will explore other botanical matters in future works? There’s been comparatively little botanically-based SF written over the years. Have you any thoughts as to why this might be?

KM: Well, plants aren’t obviously exciting – unless they move and sting, as in The Day of the Triffids, or cover the planet as in Brian Aldiss’s Hothouse, or die off and leave us to starve as in John Christopher’s The Death of Grass … But synthetic biology and genetic engineering open up new possibilities, and because plants are simpler and cheaper and more socially acceptable to modify than animals, I expect more real technology along those lines and thus more botanical SF (and technothrillers) in the future. I have no further ideas about plants for the moment, but who knows?

GD: You began your career with two series of novels, the Fall Revolution quartet and the Engines of Light trilogy, but since Engine City in 2002 completed the latter sequence each of your books has been a self-contained, stand alone work. Now, with The Corporation Wars you’ve returned both to the trilogy format and to space opera. Uploaded dead war criminals conscripted to fight an outbreak of robot sentience in an extrasolar system (to quote the description on your blog), would seem quite a change of direction from Intrusion and Descent. So why space opera now, and why a trilogy? The title of the new series would suggest concerns about capitalism remain important to the work.

KM: After the War on Terror, fundamentalism, healthism, and capitalism, I’d pretty much run out of hot social topics … No, actually this series came about because out of several pitches to my publishers it was the one they were excited about, and it became a trilogy because that’s how excited about it they were. 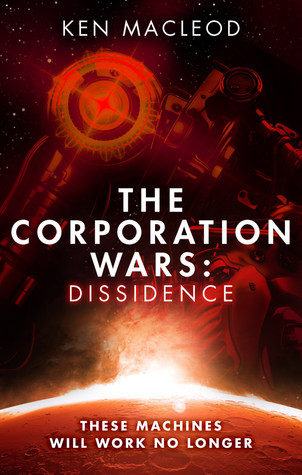 As sometimes happens it was the idea I’d given the least thought to, so I had to do a lot of reading and thinking to develop it. And as I did I became more excited about it myself – it’s a kind of space opera I haven’t done before, with quite a bit of combat throughout. It’s not really military SF, however: the chain of command is very short.

The set-up is that around the end of this century there’s a global war between (mostly) non-state forces of two opposed movements, the Acceleration and the Reaction. In the aftermath both are smashed, and a new world democracy and a new economic settlement is established. Humanity has basically decided to settle down to a long and happy retirement. Some of the fighters who have been killed but whose brain-states have been preserved find themselves, a thousand years later, revived in robot bodies (and VR environments for training and recreation) to fight conscious robots in an extrasolar colony mission. Some of the rebooted veterans take this as their chance to refight the old conflict … and then it gets complicated.

Where capitalism comes in is that the future society is on the surface a utopia where machines do all the work, but under the hood the engines of it are automated, AI-run corporations, competing fiercely. Utopia with Chinese characteristics, if you like.

GD: It sounds really intriguing. I’m looking forward to it and I can see why your publishers would be excited. So much so, that Orbit are publishing each book six months apart. When you wrote your previous series the books were published at the then traditional rate of one a year. What challenges does the faster schedule present for you as a writer? Is it an approach you welcome, or a necessary evil in an age of instance access?

KM: The faster schedule applies only to this trilogy. Now in theory it shouldn’t present a difficulty, because I had a good lead time. Unfortunately I got caught up in other things in 2014, not quite all of which were my own fault, so I’ve ended up more or less writing them at six-month intervals! I had the outlines of all three worked out, but in the course of writing I’ve made changes, and I’ve had to rework things on the fly. Bottom line: don’t try this at home, and if you do, make sure your projected trilogy or series is shovel ready before you pitch it.

GD: We’ll be voting on whether or not to stay in the EU soon. You’ve said that as an writer of the left you were more or less expected to be in the Yes camp during the Scottish independence referendum, but actually voted No. Now we face a comparable choice regarding the UK and the EU. You have written that after the votes were cast in the Scottish referendum but before the result was announced that you felt a Schrödinger’s Cat moment, of two possible futures unfolding. Regarding the EU it would seem the natural left position would be to stay in, and the argument to leave is certainly being driven overwhelmingly by the right. Yet there are strong voices on the left also arguing to leave, albeit for very different reasons. Given your politics and your close experience of the Scottish referendum, where do you stand regarding leaving the EU, and again, do you have that Schrödinger sense of very different futures hanging in the balance?

KM: Although the EU referendum is a big deal, it doesn’t seem quite so fraught with significance as the Scottish referendum.

I’ve always been opposed to UK membership of the EU, basically for the same reasons as the traditional Labour left (Tony Benn et al) opposed it. I’m even old enough to have voted no in what was then called the Common Market referendum. Now I’m well aware that things have changed since the 1970s, but the basic arguments for popular sovereignty have not. I was against Scottish independence for much the same ‘Old Labour’ reasons, and likewise it’s quite possible that I’m just sticking with an outdated left position on both issues.

However, on a more personal level I good reason to hate the EU for what it’s done to a technology that changed, and may yet even save, my life: vaping! The incoming Tobacco Products Directive covers electronic cigarettes (quite unreasonably) and smothers them with finicky, burdensome and needless regulation. The principles of EU regulation are supposed to be: necessity, evidence, proportionality and subsidiarity. The relevant article of the TPD violates every one of them. Having followed every step of the process, all I can say is if that is how the EU makes laws, I want no more of it.