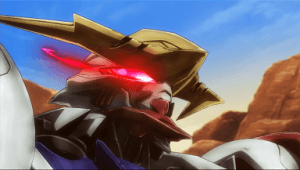 Mobile Suit Gundam: Iron-Blooded Orphans #37 – This show has been such a joy to watch this season. It’s the one place I know I won’t be subjected to pointless fanservice or moribund comedy clichés. It’s the kind of show where a guy can head into battle sitting on the lap of his crush and not have to spend several minutes of screen time on recycled romcom hijinks, because there is a freakin’ battle going on and the least you can expect from experienced mercenaries is there is a time to be professionals so they don’t get killed.

And it is a little depressing that that’s enough to make this the standout show of the season, not that it doesn’t have a bunch of other good points. But the good news is that it’ll be continuing until at least April.

And Mikazuki has chosen to switch off the limiter in Barbatos and probably demonstrate why the elites developed such a horror of cyborgs. I still think he’s going to be getting the Order of the Seven Stars, but I wonder how much of him is going to be left to collect it. 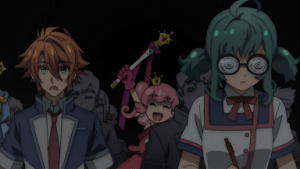 Cheating Craft #11 – Truly the people who set up these exams are cruel, for the penultimate boss turns out to be… a famous voice actor! The very voice of their childhood hopes and dreams! It’s a hint of real pathos underneath the hilariously hammy performance.

It takes Mumei a little longer than it should to figure out how obviously the Shokatsu Technique can be applied to this situation. Good thing Kōi’s super-concentration glasses somehow work on aural distractions as well.

And the final boss turns out to be Miss Ō herself. Or her evil twin, or her sister, or an alternate personality. Who knows, with this show? 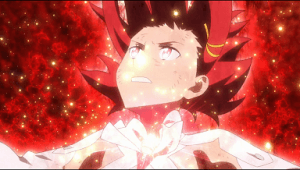 Izetta: The Last Witch finale – Izetta and Sophie have a proper all-out last episode battle, flinging tanks, trains, and architectural icons at each other. And then Izetta pulls out the entire planetary supply of magic and beams it away. I sure hope that wasn’t pointed at anything important, like say the moon, or any of our close stellar neighbors.

Kudos to the writer for allowing Izetta to survive. It would have been so, so easy to fall back on the trope of the Tragic Dead Lesbian, which is even more common in anime than in Western media. But she lives, and the continuing relationship between her and Finé symbolically repairs what was lost between Sophie and her archduke.

While that was an excellent finale, it closes off a not highly recommendable show. This has been the sort of production where the makers thought carefully about whether witches would produce contrails but not whether it would be a such good idea for them to wear something that’s all complicated straps and boob windows and chafe-inducing thigh cutouts while doing so. This could have been a fun fantastical thought experiment, but it has been hopelessly warped by the need to produce a constant stream of fanservice.

This probably won’t dent its popularity with the faithful of Japanese military sf fandom, who will probably be voting this onto the Seiun ballot to the detriment of much more deserving candidates. 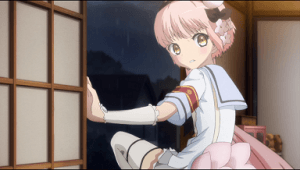 Magical Girl Raising Project finale – Fav, ever wanting to stir things up, provides Koyuki just the infodump she needs to get her riled up and racing to stop Ripple and Swim Swim from killing each other. She arrives too late to do anything but turn her frustration on Fav, who is finally taken out by Ripple.

It’s a curiously flat victory. Part of it is of course that it comes after fourteen deaths, but also that Ripple and Koyuki have been lost in the shuffle so much that they just feel like another random couple of people who happened to wander in at this moment. That’s a problem with trying to cram so many characters and backstories into one season. I feel like this could have been a much better, richer show at two.

It was probably stuffed into one because with the huge amount of anime being produced right now, it’s become harder and harder for shows to find backers willing to commit to anything longer. So the choice here was probably between this pace and not making the show at all. They got a passable show out of it, but it’s a shame. 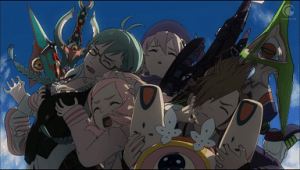 BBK/BRNK finale – Azuma loses his mojo and gets all emo until the rest of the gang knocks some good humor back into him and Ōbu’s heart starts to wake up again. And it turns out that thanks to their dual piloting, he’s still linked to Reoko somehow. Luckily, she’s suffered a memory reset so as to become a fragile girlish teen again, allowing Azuma to become her protector and destined boyfriend without ever really confronting the fact that he’s going to be dating his mom’s 41-year-old best friend.

Meanwhile, Japan is still a militarized surveillance state, but the stormtroopers are friendly, so it’s all cool.

This show had such promise, and it has fallen such a long way since it came back from its hiatus. I should be recommending it as a solid sf action show with a strong commitment to diversity, but instead it’s just been one blunder after another. I’d love to talk about the number of female characters, but then I have to look at the increasingly sexualized outfits, all the boob-centered pratfalls, and the unnecessary hot springs diversion. I’d like to recommend this for showing a disabled character as a team leader, if only she had had any other defining characteristics beyond her disability and her wish to get it fixed. I should be praising it to the skies for being the first anime I’ve ever seen to admit the existence of black Europeans, only it had to go and give Moses the happy slave narrative. It was still a beautiful moment for neurodiversity when Shizuru got her focus episode, but that’s not enough, knowing about everything that follows it.

And everything about that last episode, just, ugh.

I don’t think I’ve ever seen a show that has come so close to greatness and gone so badly wrong.

We’ve Seen Less Than One Percent of Mars. NASA’s New Lander Is Going To Change That.

Review: Queen of the World