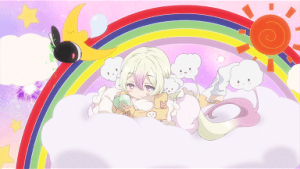 Magical Girl Raising Project #2-3 – As soon as Nemurin’s power is explained, it’s pretty obvious what’s going to happen, but episode 2 spares no effort to give her her due first. She is able to demonstrate in multiple ways that she’s a genuinely good person, and the sequences of her in her domain have some of the highest-quality art yet.

The end of her time as a magical girl demonstrates the mechanics of what will happen to all the losers from now on. It seems to be important to Fav that she should be in transformed mode at the fatal moment. I wonder what would happen (or not happen) if someone doesn’t transform? Do they simply die next time they attempt a transformation?

Eventually word gets out, and now everyone realizes what the stakes are. Now it’s not a friendly competition anymore (not that it ever was for some of them). And Fav, or whatever power is controlling it, is now amping up the desperation even more by allowing the girls to steal points from each other. 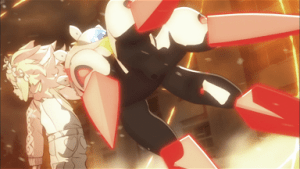 BBK/BRNK #14-15 – Maybe we can just forget that episode 13 ever happened, because BBK/BRNK is truly back to its old self now. One of the major themes continues to be how the bubuki-wielding groups work together. Maxim (the Russian head) has gone all in for dictatorship, with his teammates not even conscious in buranki form. Most everyone else agrees there is some kind of natural hierarchy, with Azuma and his friends being at the more egalitarian end of the spectrum.

Guy’s interest in the comet is the confirmation of the hints that the buranki are of extraterrestrial origin. Treasure Island looked suspiciously like it was once a spacecraft, and what the uncontrolled buranki do when they reach the ground has been described as “terraforming”. So is the comet where the spaceship came from? Or possibly a new ship on its way?

Kaoruko is still annoying as heck, but her anger at Azuma is understandable. She lost out on inheriting Ōbu, and then she was abandoned by their remaining parent in favor of him. She’s been stuck in Taipei surrounded by bubuki wielders without one of her own, and now she’s just been handed the keys to one of the most famous buranki of all.

And just as that happens, Azuma and Kogane are found by Matobai and asked to rescue the rightful controller of Entei, setting them up in direct opposition to Guy and, by extension, Kaoruko. In the very first episode, Migiwa told Azuma and Kaoruko that they could always make things better by joining hands. It will be nearly the end of the show before we know what she meant by that. 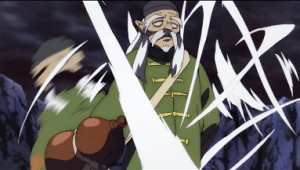 Cheating Craft #2 – Another day, another exam, and the competition is even more cutthroat than in the first episode. And this is just the exam to get into middle school!

It may be that Western viewers can only understand in an abstract manner the intense pressure that real-life exams put on East Asian students, where one test can significantly affect the course of one’s life. But empathy is easy for anyone who has been to school in the second part of this episode, when the students join forces to fight the real enemy: the authority figure.

It seems that the structure of this show will be one exam after another with ever-increasing levels of difficulty and ever more ludicrous martial arts techniques. It’s really a shōnen fighting story in disguise. 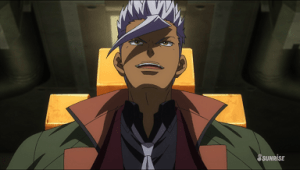 Mobile Suit Gundam: Iron-Blooded Orphans #27-28 – Straight out of the gate, Tekkadan has made a new enemy. This one is so out of their league that they are forced to accept an alliance with Gjallarhorn to fight it. Now it turns out they’ve picked sides in a fight within Gjallarhorn. Never a dull moment.

Tekkadan’s new wave of recruits has provided a rival for Mikazuki in the form of Hush, who has a moderately cliched chip on his shoulder and will probably wind up fighting him a bunch more before wising up and becoming his best friend. And then probably getting killed, considering the rate at which this show goes through characters.

On the Gjallarhorn side, there’s a brand new guy with a mask, and he seems familiar with McGillis. My best guess is that it’s Gaelio, with an outside chance that maybe Ein survived the big battle at the end of last season and has somehow acquired a cyborg body.

The action scenes are still solid, and Iron-Blooded Orphans continues to juggle its massive cast of characters with aplomb. 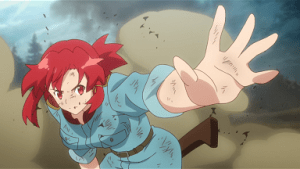 Izetta: The Last Witch #2-3 – Izetta wants to help one of the few people ever to show her kindness as much as she can, but Finé is all, nah, I couldn’t possibly ask you to help even though we’re obviously losing and you have a power that can obviously help. Luckily Izetta is not the sort of person to give up easily.

It felt like there was a big drop in production quality in episode 2, but the budget was back with a vengeance in episode 3 as Izetta got literally medieval on the Germanian army. After going through some predictable motions, the writing is better again too, pointedly averting the trope that says Jonas should have died after pulling out that picture of his family.

Izetta has the power, the guts, and the cleverness to help turn the tide against the Germanians, and everyone who survived the battle at Coenenberg knows it now. The soldiers at the end are all but proclaiming her the second coming of the White Witch already. Now Eylstadt has a huge morale boost – but also something every power in alternate fantasy Europe is going to be falling over themselves to grab. 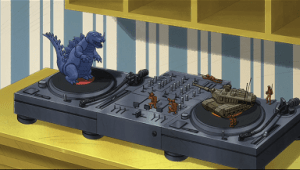 ClassicaLoid #2 – Nobody is quite sure what happened last time, but Sōsuke sees a route to instant stardom if he can harness it somehow. This leads to an increasingly desperate series of measures to try to get Mozart to manifest the same power, and eventually it turns out what he really needed was to get slapped for a roundabout boob joke.

I was ready to give this show some credit for acknowledging early on that this is one of the most tired and unfunny cliches in anime, but it turns out to only have been slightly less lazy than average. Seriously, there was no other way the writer could think of to trigger Mozart’s memories?

Otherwise this is still pretty good and opening up new territory. Evil Bach as the manager of an idol group who are also resurrected composers is definitely a new one for me. 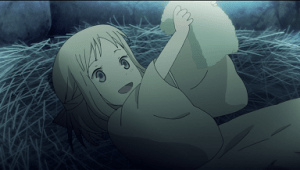 Natsume Yujin-Cho 5 premiere – Takashi is one of those people who just can’t have a normal day. Trying to dodge a downpour with his friends, he accidentally winds up with a towel belonging to a yokai who’s been trying to return it for almost 50 years. Once again, he has to reunite someone with their property, only this time the question is who that someone is.

It’s a much lower-stakes story than last time, and this seems to be pretty much what the rest of the show is going to be like. It’s kind of like the high-school slice-of-life imitation of Mushishi. It’s solidly okay. It gets the job done and is a good breather if you want a break from fighting action or hyperactive comedy. 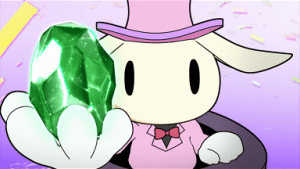 Nazotokine #2 – Before solving the puzzle, it’s time for some hardcore victim-blaming! Tokine doesn’t like being forced to wear a spandex suit any more than the next vaguely magical-girl-like heroine, but Hacchin tells her it’s what she really wanted subconsciously, so that makes it totally okay, right?

Anyway, Tokine finally solves the puzzle, and that releases her from the alternate dimension so she can get back to fangirling about anime shows and being in the vicinity of people who make anime. Probably there will be more puzzles in the future. For a show that sold itself as being about puzzle-solving, it seems remarkably uninterested in the topic.

Well, it’s time to cut this down to a lineup of no more than five shows to follow for the rest of the season. Nazotokine is dismissed with prejudice. Everything left would be worth a go in a season not so crowded with decent shows.

But since we have to abandon something, I’m going forward with Magical Girl Raising Project, BBK/BRNK, Cheating Craft, Iron-Blooded Orphans, and Izetta. I suppose that if any of those turn horrible in their next episode, there’s still time to have buyer’s remorse and swap one of the other two in.

Who can resist a laser gun wielding blonde with a tattoo on her ass, riding a dinosaur? Not me.