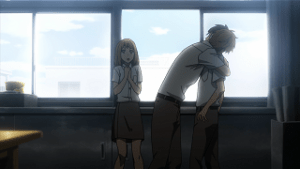 The standard iconography of suicide in Japan is jumping from a high place. In high-school anime, it’s traditionally from the roof of the school building, but Kakeru even suggesting the idea of going out a window is close enough to rattle Naho.

It’s Suwa who has to step in and do the emotional heavy lifting, though, because Suwa is doing most of the work at this point. Watching over Naho and Kakeru so they get their moments together, saving Naho from bullies, getting the flowers that Kakeru gives to Naho. 26-year-old Suwa’s greatest regret was that he realized what Naho and Kakeru meant to each other, and he didn’t step forward to help them out.

In a way, all three are dealing with other people’s pain. Naho and Suwa are trying to deal with the guilt of their future selves, who will never see any benefit from it. Kakeru was so immersed in his mother’s problems that he’s being dragged down by the memory of them even after she’s gone. The way forward for all three of them is to work out what they want for themselves as they exist now. 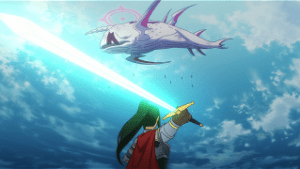 Re: ZERO – Starting Life In Another World #20

Well. Wilhelm van Astrea was quite the self-assured jerk once upon a time, it seems. No wonder he’s taken a shine to Subaru. It feels like there’s going to be more to his flashback, so I wouldn’t assume that being swallowed by the White Whale is the end of him.

…or by a White Whale, anyway. After Crusch’s massed forces have blinded, hacked, slashed, zapped, roasted, and mutilated their opponent for most of an episode, it seems like they’ve finally gotten past annoying it to doing some actual damage. And then it sends out a mighty cry and when everything is clear again, there’s a whole freaking pod of unkillable monsters.

I am out of guesses as to how there’s a chance for our heroes to win now, unless Subaru can figure out some kind of trick to using the Invisible Hands. And even then I don’t think it’s got the kind of power to take out a whole magic flying whale. Or maybe they can use that horn that Wilhelm chopped off? 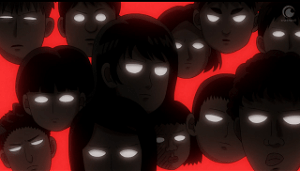 Vice-President Tokugawa is right when he says you won’t find a simple, normal middle-schooler anywhere. You sure as heck won’t find any near Ritsu. Just in this episode, he has to contend with the creep of a student council president, the local delinquent gang leader, the super-perfect Tokugawa, and a whole super sentai team of deluded barely-psychic kids. And Mob, who at this point is starting to look pretty lucky in life by comparison.

Ritsu is facing just as much pressure in life as Mob, which makes this a really bad time for it to turn out that he might have the same talent as Mob after all: psychic powers that erupt uncontrollably when he’s feeling strong emotion. And it looks like the first person who’s going to realize it is Dimple. This cannot possibly end well.

Mob has Reigen to look to for guidance. Ritsu is going to have Dimple and Mitsūra (the head of the Awakening Lab). I’m thinking Mob isn’t the one whose explosion we need to worry about next… 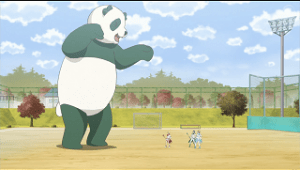 The mention of polar bears is a little nod to the moderately popular manga and show Polar Bear’s Café, which stars an anthropomorphic polar bear and also features a lazy (but very cute) panda.

Mostly this is about examining the fact that there is no reason for Ryū and Io to be friends, other than the team tropes which require That Other Couple of Guys to be buddies. But deep below their antipathy lurks a well-hidden mutual appreciation society.

Not really much there this week, although Yumoto on sea slug reproduction was worth the price of admission all by itself. It’s getting to be time to drop some more revelations about the Beppu twins.

Mars Babylon: A Review of John Carter and the Gods of Hollywood by Michael D. Sellers