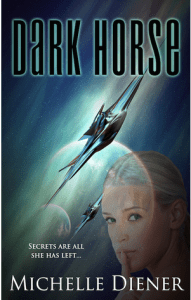 In my last post here, I was discussing discoverability and how readers find new-to-them authors in the science fiction romance world. Finalling and/or winning a contest is another way for authors to reach out to readers. At the very least, you’ll have from three to five judges read your book, who might not have picked it up otherwise. At best, your book might receive some promo if the story makes it into the Finals, or at least have some nice information to add to your editorial reviews section or description in Amazon, and tweet and share.

When it comes to contests, science fiction romance is still somewhat of a stepchild, often uncomfortably lumped in with paranormal and fantasy romances. There are a few contests where “futuristic romance” has its very own category, one of which is the PRISM Award from the Romance Writers of America Fantasy, Futuristic & Paranormal Chapter. They recently announced their list of 2016 Finalists, which seemed like a logical choice to profile here. Full disclosure – I’m an RWA and FF&P member. I’ve read the first two of these books and loved them; plan to read the other two soon.

First a couple of caveats about entering contests. There’s always an entry fee! In the romance world, which is where my experience lies, judges always have set criteria to go by in scoring a book, but like anything else of this nature, quality is subjective and what one judge sees as worth five points, another may give a 10. In many cases, readers aren’t familiar at all with the contests, nor do they generally make buying decisions based on a contest final or win. Not the way movie goers may decide to see all the candidates for a Best Picture Academy Award!  Outside the romance world, many readers haven’t heard of even the top award, the RWA’s RITA. Some but not all contests provide the judging feedback, and may have trophies/certificates/blog badges.

The RWA is a nonprofit organization. There are unfortunately a number of commercial companies who run ‘contests’, with their main intent to make money selling trophies and expensive promo to the winners and finalists. Be wary of those. Do your research – there are many articles online about these companies. The excellent Preditors & Editors website has a list of contests and recommendations and notes about any issues.

Moving on to the 2016 Prism Finalists (winners will be announced in July):

Some secrets carry the weight of the world.

Rose McKenzie may be far from Earth with no way back, but she’s made a powerful ally–a fellow prisoner with whom she’s formed a strong bond. Sazo’s an artificial intelligence. He’s saved her from captivity and torture, but he’s also put her in the middle of a conflict, leaving Rose with her loyalties divided.

Captain Dav Jallan doesn’t know why he and his crew have stumbled across an almost legendary Class 5 battleship, but he’s not going to complain. The only problem is, all its crew are dead, all except for one strange, new alien being.

She calls herself Rose. She seems small and harmless, but less and less about her story is adding up, and Dav has a bad feeling his crew, and maybe even the four planets, are in jeopardy. The Class 5’s owners, the Tecran, look set to start a war to get it back and Dav suspects Rose isn’t the only alien being who survived what happened on the Class 5. And whatever else is out there is playing its own games.

In this race for the truth, he’s going to have to go against his leaders and trust the dark horse. 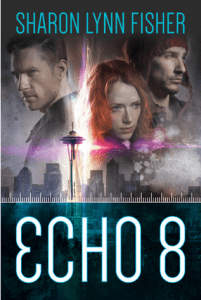 As a parapsychologist working for Seattle Psi, Tess has devoted her life to studying psychic phenomena. But when doppelgangers begin appearing from a parallel world that’s been struck by an asteroid, nothing in her training will help her survive what’s to come.

After dislocating to Seattle Psi from the other Earth, Jake is confined by a special task force for study. But when he drains life energy from Tess, almost killing her, it causes a ripple effect across two worlds – and creates a bond neither of them expected.

Ross is an FBI agent ordered to protect Tess while she studies Jake. His assignment is not random – he and Tess have a history, and a connection the Bureau hopes to use to its own advantage. By the time Ross realizes his mission could be compromised, it’s already too late – he’ll have to choose between his love for Tess and his duty to protect the people of his own Earth. 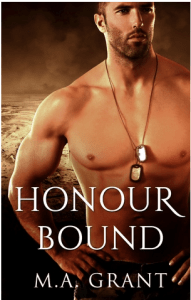 The Lawmen of the Republic: fierce, honourable, soldiers, men. But what happens when all that they’ve been told turns out to be lies?

The wars to establish the Republic are over. The families of the Ton have risen from the blood and ashes to claim the new aristocracy. Their prodigal son, First Lieutenant Alexander Cade, is the Lawmen Academy’s youngest and most successful graduate. However, his muddied bloodlines force his exile to the Northern Wastes, the last unclaimed territory of the Republic.

Lailian scout Natalia Volkova knows that her survival in a rebel labour camp rests entirely on her iron will and killing prowess. Her fierce quest for freedom is tempered by only one thing: conflicting memories of the young Republic lieutenant who helped liberate her camp, and then returned to the fold of her people’s oppressors. She never expects that their paths will cross again – under very different circumstances.

Cade’s honour limits his choices to one: take his band of specialised Lawmen into the Wastes, and protect it and its people. There, he meets Talia, a tough, resilient refugee who holds little respect for the Republic and its laws. But as a deathly outbreak leads to a desperate race for a cure, Talia and Cade will find themselves on uncertain ground: What is right is not always obvious, and what is honourable is not always right. 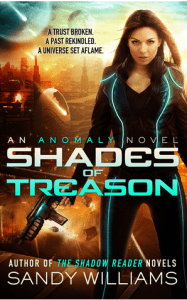 SHADES OF TREASON by Sandy Williams:

Ash would have given her life to save her teammates.

Instead, they gave their lives to save hers.

Lieutenant Ramie Ashdyn is an anomaly, a person whose genetics makes her stronger and smarter than the average human. She’s pledged her life to protect the Coalition, an alliance of thirteen planetary systems, but when a top secret operation turns bloody, she’s charged with treason and the brutal executions of her teammates.

The Coalition needs the information Ash’s team stole on their last mission, so they send in Commander Rhys “Rest in Peace” Rykus to get it. He’s the man who’s responsible for turning Ash into an elite soldier… and he’s a man who isn’t, never was, and never will be in love with the woman he trained. Or so he tells himself.

Ash wants nothing more than to clear her name and be the woman her former instructor wants her to be, but the enemy who killed her teammates did more than frame her for treason and murder: they telepathically silenced her mind, preventing her from saying anything that might point to the truth about what happened.

Now Ash is trapped and set to be executed, the truth dying with her. Unless she can prove her innocence. But taking that path could destroy the Coalition she’s sworn to preserve and protect…

A complete list of the PRISM Finalists, including those in the Time Travel/Steampunk category, will be found at the FF&P website.