I know what you’re thinking, and I promise there are no sparkly vampires in this comic. So what exactly is After Twilight? It’s an indie comic created by Gary Watson, Richard Alvarez and Sandra Yates. It takes place in the year 2022. Texas has succeeded from the United States and has become a totalitarian extremist Christian nation. The comic follows a young librarian named Jen Frazier. She tries her best to keep her head down and stay out of trouble. That all changes when her sister Zoe gets arrested by the authorities. Before long Jen finds herself swept up in the underground resistance and their plans to expose the horrors of the new government to the people of Texas and the world at large.

Okay, as you might have guessed by now, this comic deals with some pretty heavy political themes. However, I will do my best to keep it neutral. Let me be clear upfront, this comic is not anti-faith nor is it anti-religion. In fact, most members of the resistance, including its leader, are people of faith. The comic is, however, anti-extremism and anti-dogma. 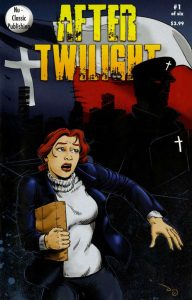 I can’t exactly say I found out about After Twilight, but I knew I wanted to read it from the start. I grew up in the American South, which is where I still live, so the premise of After Twilight always seemed like something that could easy happen. Looking back, however, I’m not quite so sure about that.

Now, the explanation for how Texas succeeded was that a fringe group of disgruntled liberals set off a bomb at an evangelical church after increasingly conservative legislation got pushed through the Texas state government. This was apparently enough to galvanize Texans to vote for a Christian separatist nation. The first problem with this is that I somewhat doubt that a one-off event would be enough to push Texans over the edge.

The other issue has to do with the demographics of Texas. Contrary to popular opinion, Texas is actually pretty politically purple. North and East Texas tend to be fairly white and conservative, but South and West Texas tend to be more Latino and liberal. Therefore, if Texas were to potentially go rogue you can expect it to quickly descend into a civil war.

We also see that the theocratic government has banned all religions except hardcore fundamentalist Christianity. Even other branches of Christianity have been declared illegal. It seems odd that all of the Catholics and other Christians just stood by while theocracy swept across Texas. On the other hand, the Religious Right often creates odd coalitions of people. Did the Catholics assumed they’d get equal representation only to get stabbed in the back after the revolution occurred? It’s actually pretty common for breakdowns of alliances to happen after real world revolutions, so perhaps so.

It’s mentioned in passing that Louisiana and Oklahoma are considering joining with Texas. Both states have very proud cultures and heritage of their own, and I find it doubtful that they would pledge their allegiance to the Texas flag. If the Texans billed it as a Neo-Confederacy maybe I could see that happening, but otherwise no. It also appears that America put up little resistance to Texas leaving the union; though their are hints that this might not be the case for long. There’s only one nuclear weapons plant in America, and it is in Texas. Therefore, an independent Texas would also be a nuclear armed Texas. So it’s a little odd that America wouldn’t take issue with a rouge theocratic state with nuclear capability sitting directly on its boarders.

Now, none of this is to say that I thought that After Twilight was bad. In spite of some shaky worldbuilding I found the comic overall to be pretty enjoyable. The main message I got from this is an age-old question: how far are you willing to go to stand up for what you believe in? Jen and her fellow rebels are facing seeming insurmountable odds, but if they don’t carry the torch who will? It’s also clear that their mission is just one step in a grander plan to bring down the theocracy, but nonetheless they bravely solider onwards.

I consider After Twilight to be science fiction of the social science sort. It is clearly a dystopia, but none of the technology is anything that we don’t already have. Strictly speaking, After Twilight isn’t alternate history but it should appeal to that crowd. I suppose that in a few years it will retroactively become alternate history.

I liked the way the comic depicts the average citizens of the Texas Republic. They’re not above ratting out their neighbors to the authorities, and quite a few hold somewhat reprehensible views, but for the most part they’re just average people trying to make the best of a bad situation. I kind of got the feeling that the revolution turned out to be a bit more than they assumed it would be. It’s rather reminiscent of Iran and how its citizens felt following the Islamic Revolution; so it has an feeling of believability to it. For that matter, the Texas Republic bears more than a passing resemblance to a Christian version of Iran.

The comic’s art is by Douglas Brown. The art for the first two and a half issues isn’t the worst I’ve ever seen, and it’s certainly fine in its own right, but the quality definitely improves after that. There’s more shading, richer colors and everything doesn’t look quite so flat. The designs for the characters are all pretty good as well, but there’s is one exception. That would be the main antagonist, Sgt. Streetman and his religion police. Streetman and his henchmen dress like Nazis, drive around in cars similar to the ones the Nazis used and yet nobody finds this even slightly suspicious. Granted, they might have only begun dressing this way after the revolution occurred, but it’s a little too on the nose if you ask me.

Now let’s talk about how After Twilight came to be. It actually started life as a black and white short film noir. Gary and company wanted to expand on the world of their short film, and thus the comic was born. They’ve been making the convention circuit to promote the After Twilight, and Gary has been known to cosplay as Sgt. Streetman. At present their isn’t a collected edition, but you can purchase the comic either on the After Twilight website or via Comixology. Just a little aside to all you aspiring writers out there, if you include the word Twilight in the title of your work it’s going to be pain in the ass to get good Google results. Just thought I ought to put that out there.

Well there you go. After Twilight has its flaws, but it’s an enjoyable dystopian comic and a cautionary tale about the perils of religious fundamentalism.

After Twlight is available here.