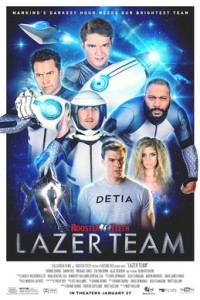 Back in 2013, I wrote what can easily be described as a love letter to Rooster Teeth, a production company based in Austin, TX that primarily produces videos for the Internet. I still have been following their work religiously, so of course I went to see their first feature length, crowd-funded film: Lazer Team.

Our story beings back in 1977. Turns out the Wow! signal was actually sent by aliens…as a warning that another alien race was going to destroy the Earth. To prevent this, the aliens would send a suit that would give the wearer extraordinary abilities. For years the United States military trained a boy named Adam to be the “Champion of Earth”, but on the day the suit was set to arrive, it is accidentally shot down from a firework launched by Zach (Michael Jones), Officer Hagan (Burnie Burns), Herman (Colton Dunn) and Woody (Gavin Free). Not knowing what the suit is for, they each put on a separate component of the suit (arm cannon, gauntlet, boots and helmet, respectively). The pieces of the suit become bonded to the wearer and thus this unlikely quartet has no choice but to become Earth’s champions.

In all honesty I really enjoyed Lazer Team…but I can see why some won’t. The plot isn’t anything new. A lovable bunch of losers who no one believes in have to learn to work together to save the world (or win the big game). The humor is low-brow and reminded me in some ways of Jay and Silent Bob Strikes Back, which I enjoyed immensely (hell, I even liked Mallrats). There was even a clever twist near the end of the film that upped the drama just a bit.

Admittedly some of the plot points went nowhere. For example, Hagan and Herman used to be friends and played football together in high school. Herman was even destined for a stellar career in football, but when Hagan missed an important block, it led to Herman being injured and ruining his future. There was a scene later where Hagan promised to never miss a block again…and then he proceeded to miss a block causing Herman to be injured again. That was pretty much the end of that plot point. Hagan gave a half-heated apology and Herman was pretty much okay with everything. In the end, I’m not sure if they were just subverting a trope or they really did not know the proper way to resolve that story line.

Acting was generally okay. Woody was played by British born Gavin Free whose American-accent was frankly atrocious. They did come up with a smart way to get rid of it so Gavin could speak with his natural voice, but the fake accent lasted a little too long. Meanwhile, there were references to other Rooster Teeth works, but unlike Atop the Fourth Wall: The Movie, they don’t require you to watch anything beforehand to get them and were quite subtle. For example, two opposing high school football teams’ uniforms were red and blue and the voice actresses who play the titular characters of RWBY at one point stood together in the background. Admittedly some in the audience might raise eyebrows as to why certain extras and minor characters were given so much camera time in what is otherwise a relatively short movie, but the references don’t detract from the movie that much.

What does detract from the film is the CGI. I’m not going to lie, it looked bad and that is disappointing from a company that has primarily used computer generated images for most of their content. You would think the company that brought us RWBY could make a flying saucer look a tad realistic, but it almost looked completely untextured. To be fair the practical effects looked good and this is a live action film, not a cartoon, but I expected more from Rooster Teeth.

Nevertheless, if you are a fan of Rooster Teeth, this is a must see movie. Its funny, it uses your favorite on-screen personalities well and its just a great experience overall. If you are not a fan of Rooster Teeth, I still think I can recommend this indie sci-fi comedy, just go into it with low expectations. Its good junk food that will satisfy you for a short time until to find something more substantial.