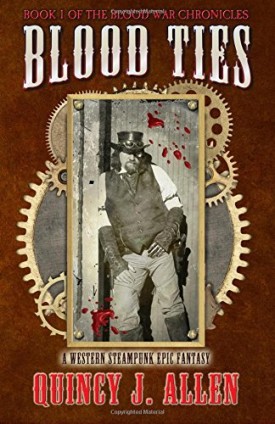 I’m not a big fan of science fiction/western hybrids; for me, the tropes of the two genres just don’t mesh very well. A good recent example that proves the point is Cowboys and Aliens, which was a terrible movie. And, yes, I will admit that I was won over by Firefly because Joss Whedon is a writing genius, but even now I think the basic premise was goofy. It’s just not my thing.

I remember as a kid greatly enjoying a TV series set in the late 1800s about a couple of agents traveling around the United States in a train getting mixed up in all sorts of weird adventures; for some reason, the one episode that I remember to this day involved somebody who could move so quickly that he appeared invisible. The series, which added scientific elements to the basic western could be considered the grandfather of steampunk: it was called The Wild Wild West.

So, when Quincy Allen wrote in the introduction to Blood Ties that his novel had “its roots set squarely in …the antics of James West in a TV series most of you probably don’t remember,” I had to smile. I remembered. I remembered Artemis Gordon, too. (Some of Allen’s readers might be familiar with West from the film version of the character more recently played by Will Smith, but I wouldn’t blame Allen for overlooking its existence as it was eminently forgettable.)

Blood Ties is about a former Confederate soldier turned adventurer after the American Civil War named Jake Lasater. A suicide mission left him without a commission, but with two metallic legs, a metallic arm and an eyepiece that can be adjusted to see in various degrees of light; as we will discover, he is by no means the only steampunk cyborg (called machiners in the novel, which I found to be an awkward neologism) stalking the old west. As with any good western hero, Jake enjoys a little mayhem every now and then, but he lives by a code that drives him to help good people and worthy causes.

The novel is about Jake taking on a job to deliver an undescribed package for a mysterious woman. In the course of the job, he must make alliances with people he thought were his enemies and confront new and powerful foes.

Blood Ties is well written. The characters are complex, with enough detail to make them interesting, often involving passing reference to past adventures that give them (and the world) depth. In addition to Jake, for instance, there is his partner Cole, a dark-skinned man with his own strengths and weaknesses, and Ghiss, a villain who, like Jake, has prosthetic limbs and a moral code (although he draws very different lines than Jake does).

Allen is also good at creating three-dimensional female characters, something many western authors have a problem with. Foremost is Skeeter, Jake’s young but headstrong tech genius who actually gets to save Jake and Cole’s lives once or twice (as opposed to being the damsel in distress who has to be saved by them). Almost as interesting is Qi, an Asian woman who combines tech and magic skills (and is a kick-ass fighter);  Qi’s relationship with Jake is complex and fascinating.

Ah, yes. The novel freely mixes tech and magic. Jake’s prosthetics, for example, are metal, but they have magical glyphs carved into them that give them non-mechanical properties (such as quick healing). I’m not sure I’m fully on board with this mix, but I’ll defer to the Wild Wild West model, which also combined the two elements.

In addition, the action set pieces are very well choreographed. For one thing, they build smartly throughout Blood Ties, which starts with an encounter between one man and three assassins and ends with a running battle through San Francisco that involves dozens of characters and a lot of tech. In every instance, Allen paints the scene vividly enough that we know how all of the combatants relate to each other at every moment.

One of the other enjoyable aspects of the novel (an aspect of The Wild Wild West which I had forgotten), was the way Allen weaves characters taken from real life into the narrative. For instance, Samuel Morse appears briefly to lament how the telegraph which he helped invent was being (ab)used as an instrument of war. More interesting is the appearance of Joshua Abraham Norton, the self-proclaimed Emperor of the United States, who has a cordial, one might even say supportive relationship with Mexico, but who is also apparently quite mad. Emperor Norton is so much larger than life that you might assume he was fictional, but he was a real historical figure; his presence enlivens the novel.

Blood Ties is by no means perfect. The first two chapters show how Jake came to lose his limbs (although not how he received prosthetic limbs); although interesting background into his character, it doesn’t directly relate to the plot of the novel, which takes place several years later. It would have made more sense to start the book with chapter three, the true beginning of the story, and refer to or even flash back to Jake’s origins later on.

Also, the reader should be aware that this is the first book of a trilogy with a single continuous story; it is not self-contained. Although Blood Ties does end with a major battle, the narrative is not over, so the reader will not get closure. To be sure, I was hoping for more books from Allen before I got to the end, and the promise of an epic air battle between zeppelins added to the enticement. Still, on principle I don’t believe that readers should be obliged to purchase more than one volume to get a complete story.

Having said that, though, I must say that Blood Ties largely lives up to its author’s ambitions. I look forward to the next book in the trilogy.

Steve prepares for a Vancouver visit from Annalee Newitz, whose latest book Autonomous, is reviewed here. He’ll be there, will you?