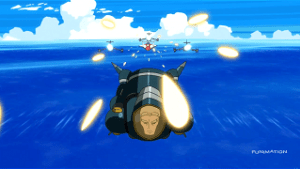 Concrete Revolutio #12 – And onward with the explanations! Kikko really is an equivalent of Minky Momo, gaining energy from human happiness. And her true mission on Earth is to find a husband. Considering how highly she regards Jirō, her attempted speech in the flashforward in the very first episode was probably intended to develop along the lines of, “I’m an adult now and I have to go take up my responsibilities back home. How would you like to be the Demon Prince-Consort?”

Claude is a popular guy, turning out to be Kikko’s pharmacist and Jirō’s old buddy and talent for Imperial Ads, which depressingly turns out to just be in the hero business because it’s the hip new wave in marketing. And he turns out to be a past guinea pig for Ikuta Labs, which has been lurking in the background for the last few episodes but has suddenly emerged as the central reason for everything that is wrong with the Superhuman Bureau.

Ikuta Labs is a clear stand-in for one of the most horrifying and least talked-about parts of World War II in east Asia: the Ishī network.

Shirō Ishī was an officer in Japan’s Army Medical Corps with a strong enthusiasm for biological weapons and a total lack of scruples about experimenting on actual humans. His most infamous creation was Unit 731, a camp in Pingfang, China that tested various deadly diseases on POWs, but as he rose through the ranks, brutal medical testing was also carried out at other facilities, including at least two universities in Japan itself. In addition to the disease work, his network is believed to have been responsible for experiments involving death by poisons, exposure, and conventional weapons; Frankensteinian exercises in removing body parts and attaching them elsewhere; vivisection; random amputations just to see what would happen; and probably more.

As the war ended, Ishī faked his death and went into hiding, but was eventually found by US authorities, and, along with his subordinates… got off scot-free. Because they had all this valuable scientific data that could not be duplicated by any ethical means (even by the standards of a government that was then conducting the Tuskegee syphilis experiment and other similar trials on vulnerable populations), they were offered a complete amnesty in return for handing it over. Ishī continued to practice medicine afterward, and may have travelled to the US to advise the army’s biological warfare division directly. The evidence of what Ishī and his confederates had done was suppressed from war crimes tribunals, and didn’t start emerging in force until the 1980s.

So that is what’s been fuelling Concrete Revolutio all along– Japanese crimes, the US complicity in the coverup, and, perhaps, a hope that in a slightly better alternate universe, heroes could have exposed it all sooner. 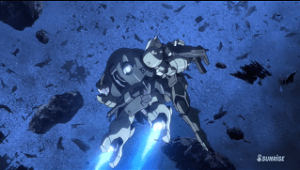 Mobile Suit Gundam: Iron-Blooded Orphans #12 – Into the Shoals, with the great sfnal image of what happens when your graveyard of shipwrecks includes partially functional artificial gravity systems.

I’d begun to think that Iron-Blooded Orphans didn’t have the guts to kill off anyone in or important to Tekkadan, but there you go. Mea culpa.

Masahiro’s coping strategy for life as a pirate slave has been to develop extensive defenses against hope, and Akihiro bulldozes his way through every last one of them. Even then, the thought of rescue is so hard to accept that he instead opts for noble sacrifice. Melodramatic, yes, but absolutely believable.

Meanwhile, life goes on. I love the little bits of graffiti that are creeping into the Isaribi backgrounds week by week. I hope we find out who’s responsible for them. (At this moment, I’ll give you 50-50 odds that it’ll turn out it was whoever got killed boarding the pirate ship.) 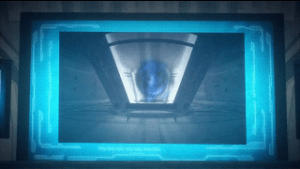 Kagewani #12 – So Professor Bamba actually agreed to join Sarugaku, and has been there for some time now. The last episode where he clearly wasn’t working for Kimura would be the one about Satoru (the plant-boy); perhaps it was seeing someone who was still largely human taken away that motivated Bamba to get to the bottom of what Kimura was doing.

Or maybe Bamba has plans of his own for the monsters. Or, who knows. We haven’t had much of Bamba’s own thinking explained, which is a bit worrying at this point. Is that scar really all that’s left of his encounter with the kagewani, or did the woman from Yunnan fail to remove all the contamination? Was he changed more profoundly than he’s let on?

One thing you can be sure about is he isn’t dead. Is it just the turtle-monster breaking down the door, or…? 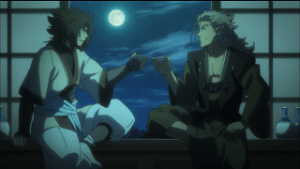 Utawarerumono: The False Faces #12 – This show is certainly earning its subtitle this week. Not only does it turn out that the General of the Left likes hanging out incognito as much as the General of the Right, Haku’s sudden portal-building, story-craving friend from a few episodes ago is none other than the emperor himself.

The emperor decides to give Haku custody of two nubile slave-priestesses for no apparent reason other than causing further uncomfortable comedy moments. But let’s not complain, because the addition of two clerics means Haku has now assembled the entire party he’s shown with in the credits, and this means the story has to proceed now, doesn’t it?

The scene after the credits, where the Pillar Generals appear to be asking the emperor for permission to open a special can of magical whoop-ass, sure seems to confirm that. All right, Utawarerumono, you’ve had your chance to slack off, now you’d better make it all worthwhile.