The tuition for becoming a Jedi Master may not be as expensive as you thought. And now, that long gap between each new episodes just might be a little more tolerable.

Fandom has been waiting patiently for December 18, 2015, when Star Wars: The Force Awakens finally hits theaters. Even then, Episode VII of the storied saga created by George Lucas will hold us captive until the next installment comes out in the distant future. But what can we do to traverse the time between these epic adventures?

Why, we must join the ranks of the Jedi, of course.

Titan Comics gives all of us the opportunity to become one of the powerful knights, to strengthen our knowledge in the ways of the force and become more powerful than ever imaginable. 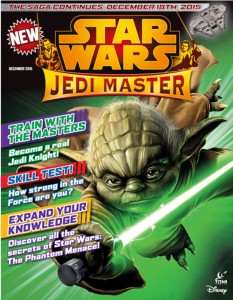 This preparation comes in the form of the new magazine, Star Wars Jedi Master (November 25, 2015).

Following the timeline set by Lucas, this first magazine/training (December issue) begins with an in-depth, step-by-step review of the timeline and events of The Phantom Menace. Along the way, readers are provided with fun facts and tested with questions, games, quizzes, puzzles and challenges of Jedi skills that are necessary for success.

Loyal fans of the franchise will have no problem as they make their way from page to page. But rest assured, if your skill are weak, you can still check the back for answers.

For those less ambitious, the magazine is also a wonderful review of the saga with images, posters, and character insights from the films. And for those just crawling out from under a rock, it is a detailed recollection suitable for bringing any non-fan up to speed on the story.

And just in case you’re wondering, yes, there IS an official Jedi Training Academy certificate (signed by the one-and-only Mace Windu) suitable for framing.

Priced at $4.99 on the newsstand, the tuition for becoming a Jedi Master could not come easier. And now, that long gap between new episodes just might be a little more tolerable with Star Wars Jedi Master.