I happened upon a resource that made it fairly easy to gather up a bunch (perhaps all) of the registration numbers for Hugo Gernsback’s patent grants.

All of Hugo’s patents were issued pre-1970, which happens to be the cut-off date for easy searches on the USPTO’s website;  FreePatentsOnline gives a good list as well, but also includes non-Gernsback patents that cite his, making for a much longer list to sort through. 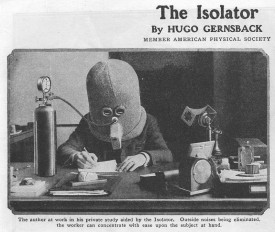 Regardless.  My primary interest was in finding out whether or not ol’ Uncle Hugo had actually patented his Isolator helmet and, if so, what other “whacky” things he might have gotten a patent for.

I’ve not found the Isolator, but I did uncover a couple of very interesting designs, as well as a good handful of solid, practical technological advances and contributions.  Most SF folks tend to forget that Gernsback was both an inventor and one of the people in on the ground floor of the development of radio (a good and apparently respected friend of none other than Nikolai Tesla, at least for a while).

Hugo apparently took his own advice:  early on, he frequently recommended to his authors that they seek patents for the technologies they’d invented in their stories.  Most apparently did not follow this advice however.  At least I’ve not seen any grants to Ursula Le Guin for the Ansible (though Heinlein’s description of the waterbed as prior art was detailed enough to prevent an application for that device from being granted.)

Standouts?  How about an electromagnetic “arrestor” to slow airplanes landing on carriers?  Giant magnets mounted on the flight deck would be activated by a crewman;  the pilot would have to bring his plane within “2-3 feet” of the deck in order for it to be captured and slowed.

There’s also a set of headphones that is probably the ancestor of all headphones.  Not to mention a push-button electrical switch whose descendant I saw in a building not too long ago.

There are a few on the whacky side:  a hydraulic fishing system (just suck up the ocean!); a submersible amusement device that looks like it could be used to conduct mass water-boardings, and an electric brush & comb that, if not properly employed (or suffering a breakdown) looks as if it could rip all of the hair off of your head!

One of the more interesting designs seems to fit right in with Gernsback’s interest (and success) with marketing:  a postcard essentially optimized for mail marketers.  Send out a solicitation postcard.  If the recipient is interested, they put their name and address on the card and return it, whereupon the sender pastes the whole thing, new address and all, right onto whatever it is they’re mailing. (Hopefully someone in the office recorded the customer’s address before the package was shipped!)

A few have no doubt come down to us in the form of improved versions – the illuminated mirror, the headphones, the electrically operated fountain (not to mention some of the radio transmitting and receiving devices, even though we no longer use crystals for such things.  When I built my own toilet paper roll crystal radio as a Cub Scout, I had no idea I was following in Gernsback’s footsteps…)

However, I think the most interesting thing I found was the preamble to his very first patent, a new method for manufacturing dry-cell batteries – the very same invention he brought with him to America that got him his start.

“To all whom it may concern;

I, Hugo Gernsback, a subject of the Grand Duchy of Luxemburg, and resident of the city, county and State of New York, have invented certain new and useful improvements in Battery-Cells, of which the following is a specification,”

But no patent (maybe there was a rejected application) for the Isolator.  Which is kind of sad, considering what might have developed if it had been patented and marketed commercially.  I can see it being a feature of an old Honeymooner’s episode…the subject of Playboy cartoons…perhaps even adopted by educational programs…(Vulcans may stick their kids in pits, but humans have Isolators!)

Here’s a gallery of the drawings accompanying his patents:

Your science dollars at work: where before it was thought the Alcubeirre Drive would require “more energy than the universe posesses”, they’re now down to a theoretical “couple of tons” worth of energy.

Does this herald the beginning of von Neuman machines?