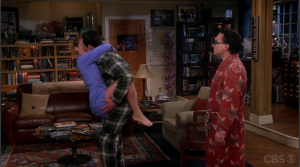 Following Penny and Leonard’s marriage in the season’s first episode, and Sheldon and Amy’s breakup, the series continues to focus on the relationship and character based portions of the show which don’t distinguish it from so many other sitcoms on television. It opens up with Leonard brooding in his apartment over a hot beverage when Sheldon comes in. Leonard is still living with Sheldon despite being married to Penny. When Sheldon points out that it usually takes people much longer to screw up their marriages, it is of slight comfort to Leonard, but before he can answer, Penny enters, also unable to sleep. Sheldon suggests that to restore balance to their relationship, Penny should make out with another man. Although Leonard is dismissive of the idea, Penny sees merit in it. However, as soon as Sheldon suggests that if he makes out with Penny it would restore balance, it is clear to anyone who has ever seen a sitcom that Leonard is in the middle of a nightmare, although it takes Leonard a little longer, and a lengthy lip-lock, to wake up from his nightmare and for the theme music to play. 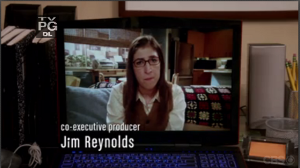 Over a Skype, Amy tries to get Sheldon to understand what breaking up actually means. Her character may have shown the most development since she was introduced as a Sheldon clone who only dated once a year to keep her mother happy (Season 3, Episode 23 “The Lunar Excitation”). Sheldon explains that although they aren’t still a couple, they did make a “baby” together: Fun with Flags (both ended and re-started in the Season 8, Episode 10 “The Champagne Reflection.” As any rational person would, Amy refuses to get dragged back into the show, despite Sheldon pointing out that Sonny and Cher continued to work together long after they divorced.

Raj’s discovery that Leonard made out with Mandy Chao causes strife in a strange area. Since Howard knew about it and didn’t tell Raj, Raj is feeling betrayed. While Leonard is having problems with one wife, Howard points out that he is having problems with two wives. It does show how far they have come, however, since when the show started, and before Bernadette, the two would share everything. 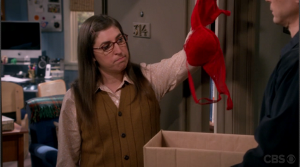 Standing outside Amy’s doorway, Sheldon very uncomfortably knocks three times and stops so Amy would open the door (she would have had to stand on tiptoe to look through the peephole, which seems to be located about five inches above eye level for her. Sheldon proceeds to pull items out of his box, including a lacy red bra, in an attempt to make her jealous. Amy identifies it as Penny’s, grabs the rest of the box, and closes the door. Sheldon runs to a table in the hallway and completes his knocking ritual, despite previously stating that it isn’t a compulsion for him, and breathes a sigh of relief. 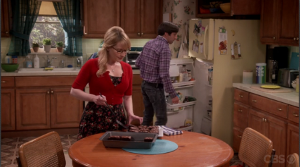 Howard wanders into his kitchen where Bernadette is preparing brownies for girls’ night. As he goes to reach for one, she slaps his wrist and explains that she’s mad at him. He explains that “The guy at the store says that in five to seven years it will pay for itself,” playing back to Howard’s inability to not buy little toys. Naturally, Bernadette was referring to something else, so Howard has to try to push his purchase under the carpet to figure out why she is mad at him. While Raj is angry at Howard for not telling him about Leonard and Mandy, Bernadette is mad at him for telling her so she has had to keep a secret for two years, made more difficult now that it is out in the open. The two agree that it really is Leonard’s fault for making out and Howard reveals the nature of his purchase, something completely non-geeky, at least as it is generally defined by the show. 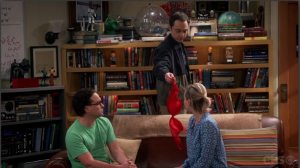 Leonard, meanwhile, is calling around for a marriage counseling services to find out how expensive they are. When Penny enters, he hangs up and they discuss their problem. As they are about to talk, Sheldon enters and Leonard asks for some privacy (why don’t they ever just go to Penny’s apartment, right across the hall when they want privacy?). Sheldon agrees and returns Penny’s bra to her. Sheldon interrupts their conversation with dialogue reminiscent of Leonard’s opening nightmare and Leonard responds by muttering “Wake up!” three times. Rather than kiss Penny, Sheldon suggests that she meet Mandy Chao, which is not, necessarily, a better solution. Leonard’s opposition to the idea causes Penny to want to meet Mandy. 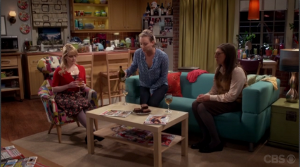 Penny, Amy, and Bernadette are in Penny’s apartment commiserating about Penny’s problem and she notes that she never saw Leonard as the kind of guy who would do something like this, although he has, in fact, done this before. Of course, this ignores the fact that when Leonard was dating Priya, he cheated on her with indie comic artist Alice in season 5 episode 7 (“The Good Guy Fluctuation”), in which he also shared the fact that he cheated with Penny, and then admitted it to Priya (which didn’t work out much better than admitting his kiss with Mandy to Penny. Bernadette, of course, is very uncomfortable, continuously claiming to have just found out about the situation. Penny explains that she knew her previous boyfriends were cheating, since she usually met them when they cheated on their girlfriends with her. Bernadette does suggest that Leonard has become who he is because of Penny and that he’s with her now because he wants to be, not because he thinks she’s the only person who would have him. 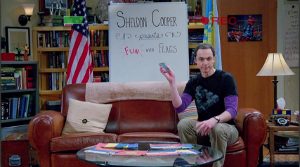 Sheldon carries on with Fun with Flags, without Amy. He announces their breakup and notes that he’ll be using a remote control to do everything Amy used to do. His theme is countries that have been torn apart and the women who caused it.

In the cafeteria, Howard reveals that he knows how much marriage counseling costs since he and Bernadette have occasionally seen a marriage counselor to “stay on top of things,” something else Howard hasn’t told Raj about. Across the café, Mandy enters with her lunch. Raj and Howard start making some extremely lame double entendres about marine biologists before he goes over to talk to her. 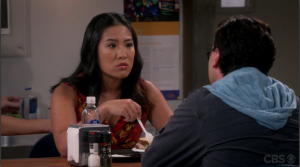 Apparently, Mandy was a bit promiscuous on the boat, having had sex with multiple guys, so to her making out with Leonard was nothing. He explains that he just got married and that Penny is concerned about them. She explained that it was just a kiss and doesn’t understand why he would even mention it to his wife. She also asks if, maybe, he was trying to sabotage his marriage to Penny. Mandy clearly doesn’t want to talk anything through with Leonard and suggests a therapist, or anyone other than her. Leonard, unable to take clues from Mandy begins to use her as a therapist, admitting to a dream where he was nursing a baby Sheldon. Mandy looks at him and questions why Penny is worried about her. 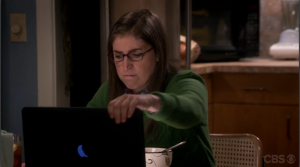 Watching Fun with Flags, despite her protestations that she needs to be apart from Sheldon, Amy announces she’s going to kill him.

Leonard tells Penny that she might be right about him trying to sabotage their wedding. He explains that he still feels like she doesn’t deserve him. She understands since she is also insecure about their relationship since she thinks he will leave her for someone more like him (a description which fits her impression of Mandy). Leonard points out that he can’t understand why she would want to be with someone like him, so why would he want to be with someone like him. 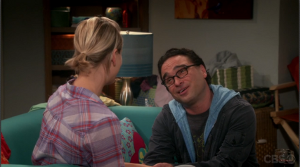 Leonard suggests that they move beyond being scared of losing each other. Leonard then re-proposes to her and they head off to consummate their marriage.

In the final scene, Sheldon gives them a wedding gift…plane tickets for a weekend in San Francisco. Unfortunately the trip comes with a Sheldon included. When Sheldon opens the door, an angry Amy is there to demand that he take the Fun with Flags video down. Knowing she watched it makes Sheldon declare that he’s going to win her back, although Amy called through the now-closed door that she only watched it since he e-mailed it to her with the subject line that would make her mad. 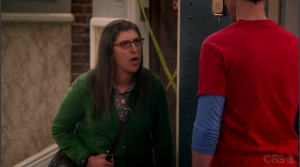 Aside from some of the jokes Howard and Raj made at Leonard’s expense and the scene set in the comic book shop, this really could been just about any other sitcom. For anyone who follows celebrity news, the fact that Kaley Cuoco has recently announced that she’s getting divorced makes the story between Penny and Leonard a little uncomfortable. However, if the show doesn’t remember its roots, it may be that season nine is when the show completely jumped the shark.