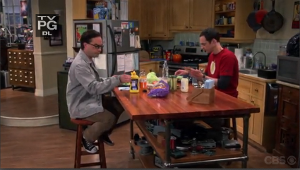 Three episodes into the ninth season and The Big Bang Theory finally seems to remember that it is supposed to be a show about geniuses, as well as a sitcom about relationships. The episode opens with Raj and Howard showing up at the apartment Sheldon and Leonard share, despite the fact that Leonard has now been married for two episodes and apparently put Penny’s troubles with Mandy Chao behind her. The always literal Sheldon complains that it can’t be a proper kidnapping without duct tape and rope to bind the victim’s hands, which telegraphs the joke that the cold open with end with. Raj and Howard have cleared the kidnapping with Penny, who packed bag for Leonard. The plan is to hustle him off for the weekend in a van (wondering if they should lure him in with candy, see Season 8, episode 5 “The Hook-up Reverberation”). In any event, Sheldon’s literal-mindedness helps Leonard make up his mind to go. 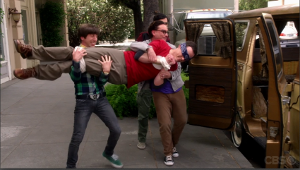 Once on the road to a weekend trip, Sheldon still complains that he doesn’t want to go, especially not in a hippie’s mobile sex dungeon (and it is awesome that “hippie” is one of Sheldon’s go-to pejoratives given that the character was born well after the “hippie” period). Raj reveals that the van used to be owned by Richard Feynman (1918-88), and nothing has been changed since Feynman owned it. Sheldon’s impression of the van suddenly changes. In Sheldon’s mind, it suddenly went from being a mobile sex dungeon to a mobile physics salon. Raj hints that they are taking Leonard to somewhere with spicy food and the potential for diarrhea. Leonard guesses either India or Raj’s house, compounding the type of stereotypical joke which is more typical of Sheldon (and occasionally Howard). Raj eventually reveals that their destination is Mexico and the beach house Feynman purchased with the money from his Nobel Prize (Feynman’s house in Playa la Mision, Casita Barranca, is, in fact, available as a rental property on Airbnb). Of course, when Raj asks Sheldon what is wrong with Mexico, Sheldon, true to form, depicts a Mexico full of stereotypes, although the revelation of their specific destination is enough to turn Sheldon’s opinion around. 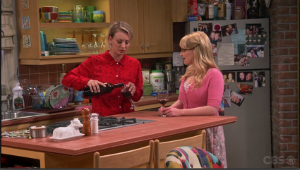 Back in Pasadena, Bernadette tries to convince Penny that since Leonard is doing “bachelor stuff,” they should take Penny to a strip club. Penny points out that she can see a naked dancing man whenever she wants by simply flushing to toilet while Leonard is showering. Amy enters with cookies shaped like anatomically correct male genitals as her contribution to the bachelorette party. Penny receives a text from Leonard that they’ve entered Mexico. While Bernadette hopes that they don’t get too crazy, Penny points out that Sheldon will lecture them about NAFTA, and Amy responds that he did that on one of the longest nights of her life. The real question, however, is why did Leonard and Sheldon happen to have their passports with them when Raj and Howard happened to kidnap them (or how did Raj and Howard acquire their passports for them).

In Mexico, Sheldon is concerns about possibly carrying contraband into Mexico without knowing it. He also wants to know if everyone is up to date on their inoculations, which he had before even going to EPCOT in an apparently unaired episode of the show from last year.

Penny and Leonard haven’t had a discussion with Sheldon about Leonard moving in with Penny, still guided by the agreement worked out last season in the department store (Season 8, episode 12 “The Space Probe Disintegration”). Penny explains that Leonard is practically living with her, but they are waiting for Sheldon to discover that fact. Bernadette turns the conversation to the Amy’s single life. She’s thinking about changing her wardrobe, much to the relief of Penny and Bernadette until they realize what sort of minor changes Amy is planning. The revelation that she never pierced her ears leads Penny to offer to pierce them for her, which seems like it would have been the perfect time to reference the ear-piercing scene in the film Grease, although the writers gave that a pass.

In Mexico, the race-based jokes continue with Howard suggesting that if they get stopped by the cops, they could put Raj into the driver’s seat with a sombrero. Raj calls Howard on this, and Howard points out that he is much worse with regard to national stereotypes when he watches the Olympics. In the back of the van, Leonard compares riding in the van to riding in the Batmobile, quickly noting that Batman isn’t real, isn’t a physicist, and would have a car much cooler than Feynman’s van. As Sheldon is considering that he is sitting where Feynman sat (although why Feynman would be sitting in the back seat is left unexplored by the characters), the van blows a tire on what may be the least traveled highway in Mexico.

Amy’s Facebook status is still listed as “In a relationship.” When Bernadette asks her about it, she decides to let all her Facebook friends know she’s broken up with Sheldon and turns to Penny to reiterate it. Penny also hasn’t updated her status since she hasn’t yet told her parents or family that she was married (again? Did she ever tell them about her first marriage to Zack?). She’s worried she’ll disappoint her father who wants to dance at his daughters’ weddings, although his dance at Penny’s sister’s wedding was interrupted when her water broke. Penny figures if she waits long enough, her father will suffer from Alzheimer’s and will believe whatever he’s told.

Night, apparently falls fast in the Baja desert and Howard is busy taking the lug nuts off the wheel when he discovers the last one is rusted in place. Howard suggests that the final lug nut might turn the other way (it doesn’t). 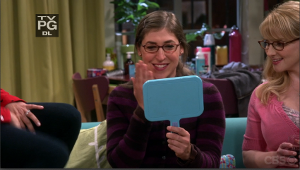 After Amy’s ears are pierced, and she realizes that her mother can’t lock her in the “sin closet” (this is a woman who wouldn’t let Amy join Girl Scouts because they just sell cookies on the street like whores, season 7, episode 22 “The Proton Transmogrification”). Penny comments that it isn’t surprising that Amy isn’t close to her mother and Bernadette brings up the whole “not telling Penny’s parents she’s married” thing. Penny agrees to call her father, but upon learning that Amy hasn’t revealed her breakup with Sheldon to her mother, tells Amy she has to call her mother next. Reprising his role as Penny’s father from the fourth season, Keith Carradine is accepting of Penny’s new situation, only to reveal that he accidentally backed over Penny’s pet pig (which hasn’t been mentioned before).

All four of the boys are working on the lug nut with Raj trying Lamaze breathing. Leonard points out that it is a physics problem. Sheldon quotes Archimedes saying that given a lever long enough and a place to stand, he could move the world. They look for a lever, but not before they get into an argument over the proper pronunciation of “Lever” (notably whether it has a long or short “e” sound). 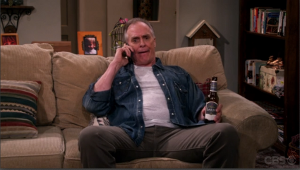 Penny is upset that she made the call, in effect opening the box on the Schrödinger’s cat of her pet pig, although without the physicists in the room, none of the women make the connection. Now Penny knows the pig is illegally buried next to her grandmother in the backyard (see, not just race based humor, but also redneck based humor). Bernadette ponders why they didn’t eat the pig, which is probably what half the audience is thinking. It is wonderful to watch Melissa Rauch’s expressions, because she shows the anarchic, fire-bomb loving side of Bernadette quite well with just a smile. It is now Amy’s turn to call her mother. She pretends to call her mom, but is called out for not dialing (although with short cuts, dialing a cell phone can be as simple as pushing a single time). Rather than tell her mother about Sheldon, Amy starts to ask about a family feud when Penny grabs the phone and blurts out all of Amy’s secrets, from the breakup to the recent ear piercing. 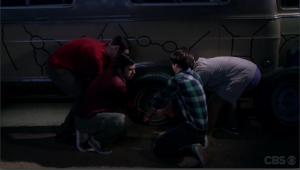 The scene cuts to Howard putting all his weight onto the end of an incredibly long stop sign. As alternatives, Raj suggests a Star Trek phaser. Howard dismisses the idea since a phaser has too broad a beam. They need something precise like Superman’s heat vision. Sheldon suggests Green Lantern’s ring which could make a big green hand to unscrew the lug nut. Raj suggests that the perfect big green hand belongs to the Hulk, but Sheldon doesn’t think he could get past the border. This is the sort of fan geekery that the show once excelled at, but which it tends to shy away from. And as it gets going, Leonard puts on the brakes but applying real life logic, just as he did earlier when talking about the Batmobile. But his interruption leads to a fantastic sequence in the episode which the writers have never attempted before. What follows is a montage of the four using a variety of scientific principles to loosen the lug nuts, each one introduced with a screen wipe explaining what principle they are using…“Percussive Shock” leads off with Leonard rhythmically hitting the lug nut. Raj starts clapping in time and Howard begins singing “We Will Rock You.” Sheldon joins in and just as Raj, Howard, Leonard, and the 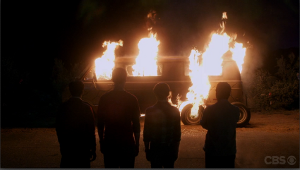 audience wonder how Sheldon knows a Queen song, he reminds them that an eidetic memory can be a curse. The second principle is “Thermal Expansion” which shows them using tortilla chips as a fuel source. Sheldon is concerned the burning food might attract animals, but Howard assures him that they have plenty of food for wild animals, notably Sheldon. They next try “Accelerated Corrosion” by burning salsa to get the acidity of the salsa to corrode the lug nut. Sheldon realizes that he may not give Howard’s MIT education enough credit, but Howard learned the trick on Mythbusters. Finally, they try an “Exothermic Reaction,” created by mixing rust from the van’s bumper with aluminum to make thermite. A few pinches have exactly the effect one would expect and the boys are standing around watching a burning van with expressions and concern, shock, and glee to see that the lug nut came off. 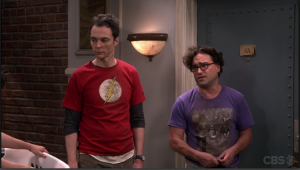 Returning back early, Leonard and Sheldon run into Penny in the hallway and they begin to play a game of “who had a worse weekend.” While getting a flat and blowing up the van apparently equals forcing Amy to sit in a closet with her pierced ears and learning her pig died, upon hearing the Leonard spent the night in Mexico with Sheldon, Penny happily concedes victory to them, although since Leonard has spent most of his nights with Sheldon as a roommate, why doing it is Mexico is any different is left up to the viewer to decide.

It was good to see the writers not only introduce Sheldon’s scientific wonder of being where Richard Feynman was as well as the geekery of arguing which superhero would be best at changing a tire, but the addition of the use of scientific principles in problem solving took really moved this episode away from the standard relationship sitcom the show has been so far this season.