2015 marks the ten year anniversary of the Percy Jackson and the Olympians series. As a writer for Amazing Stories, as well as a huge Percy Jackson fan, I thought I ought to commemorate the occasion. I first discovered Percy back in 2009 when a chance email from Branes & Noble advertised the publication of The Last Olympian, the fifth and final book of the original series. My interest was piqued and I looked into the series. I also happened to have a spare credit from Audible.com lying about, and so I bought The Lighting Thief, the first book in the series 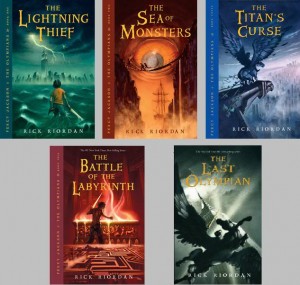 I fell in love with the series immediately. Percy Jackson has become to me what Harry Potter has been for so many others. Now, that’s not to say you can’t be a fan of both series. Indeed, fans of one series tend to be fans of other, and I quite enjoy the exploits of Mr. Potter and company. However, I just never really got into Harry Potter the way many other people have. Percy Jackson, on the other hand, was the first time I seriously connected with a book series and its community of fans. It was this series that gave my love of mythology a serious boost and helped shape my first few attempts at being a writer.

I’ve written my fair share of Percy Jackson crossover fanfiction over the years, and some of my first attempts at novel writing were pretty unashamedly based on Percy Jackson and the Olympians. Still, I don’t regret any of that, it helped me grow as a writer and led to bigger and brighter things. Perhaps the greatest gift that Percy gave me was the gift of friendship. High school was rough and I didn’t have much in the way of friends. I was able to find a group of YouTube book reviewers, known as We Read Books, via the suggestions on a review of The Lightning Thief I posted. I also made several friends on Fanfiction.net and its sister site Fictionpress. At times it seems like it was one of those friendships that keep me from completely losing my mind.

My love for Percy Jackson led me to so many other great series. I can say with full confidence that I wouldn’t be here on Amazing Stories if it wasn’t for Percy Jackson and the Olympians. Anyway, that’s enough gushing one my part, let’s take a looks at some of the adventures and achievements of the Percy Jackson series.

The saga of Percy Jackson began ten years ago when middle school English and history teacher Rick Riordan ran out of Greek Myths to read to his son Haley. Riordan took it upon himself to craft a story featuring a modern day demigod having adventures across America. He decided to make Percy dyslexic and ADHD because Haley had recently been diagnosed with those disorders. Riordan expanded the story into a novel and sent in off for publication, where it soon caught the eye of Disney-Hyperion. The rest, as they say, is history, but we’re gonna talk about it anyway.

Percy Jackson and the Olympians has proven to be one of the biggest success stories of the post-Potter world. Following the five book original series, a spin-off series was established in the form of The Kane Chronicles. I must say The Kane Chronicles is a very enjoyable series in its own right, but I digress. Recently, a series of crossover stories between the two series have been written, with hints of more to come. Speaking of things to come, Riordan has announced plans for a Norse series called Magnus Chase and the Gods of Asgard. The first book of this new series, The Sword of Summer, comes out October 6th. There have also been a few short story collections, including three Percy Jackson/Kane Chronicles crossover stories.

It was only natural the Percy Jackson and the Olympians would get a sequel series in the form of The Heroes of Olympus. Admittedly, I didn’t enjoy it quite as much as the original series, but there’s still plenty to love. You get greater diversity among the characters, tons of new characters from Greek and Roman mythology…and one of the main characters comes out of the closet. Yes, you read that correctly. A character in a middle grade series partially owned by Disney comes out of the closet. It gets better when you hear Uncle Rick’s reasoning; he wanted the books to be inclusive and to be a place where everyone feels welcomed. As such, it would be a great disservice to pretend that gay kids didn’t exist. Uncle Rick is seriously awesome.

There have been many adaptations of the Percy Jackson series over the years. Most notably are the movie adaptations of the first two books. They’re…movies. Okay, seriously, what were the directors thinking?!  Both movies are very much In Name Only adaptions and only bare tertiary connections to their source material. Bad acting, bad casting and just all around bad. I could do an entire article on how much these movies sucked, but that’s not what you came here for. Suffice it to say that the movies are almost universally despised and held in low esteem by Percy Jackson fandom. There’s a video game for Nintendo DS that’s based on the first movie. Ironically, the video game is actually truer to the book than the movie is, and in terms of gameplay is a pretty basic turn-based strategy game.

All of the books have received audiobook adaptions featuring all sorts of talented narrators, but personally, Jesse Bernstein’s narration of the original series remains my favorite. Have mentioned that there was a musical adaptation of The Lightning Thief? Oh yes, that total happened. It was an off-Broadway musical that toured nationwide in 2014. The best part was that entrance was totally free…pity that I didn’t find out about it until recently. What’s really impressive is that, despite the low budget, the cast and crew were creative enough to make it work as a straight adaptation instead of a parody. Hmm, a Percy Jackson affectionate parody musical? Hint hint, Team StarKid.

Now let’s talk about the fandom. Obviously, Percy Jackson is a huge hit in the United States, but what about the rest of the world? Brazil, of all nations, has Percy Jackson fandom on par with the American fandom. Rick Riordan is more than aware of this and has even sent out tweets in Portuguese, and has included a minor Brazilian character in the Kane Chronicles, as nods to the Brazilian fandom. There is at least a moderate amount of fandom in Canada and the United Kingdom given Riordan’s visits to Toronto and London, as well as all the Canadian fanfiction writers I encountered over the years. The books have also proven popular among readers with learning disabilities such as dyslexia and ADHD. There’s also plenty of older readers who enjoy the series. In fact, there are even college Classical Studies classes that recommend the series as supplemental reading because of its attention to detail and accuracy to the original myths. Plus you gotta love the snappy humor and excellent character development.

The Percy Jackson fandom has produced some really amazing things. You can buy your own Camp Half-Blood and Camp Jupiter t-shirts from any number of sellers on Amazon. You can also buy replicas of various items from the books such as the necklaces Percy and Annabeth wear, the Mark of Athena coin and all sorts of creative goodies. There are even summer camps across America, usually sponsored by book stores and libraries, where kids can get their own Camp Half-Blood experience.

Well, there you have it. A brief overview of Percy Jackson’s history, its fans and what it all means to me. I hope you all had a good time and maybe even learned something new. It’s been ten amazing years, and I can’t wait to see what the future holds. And since you’ve been good and read the whole article, you get to see some pictures of me showing my fandom pride. 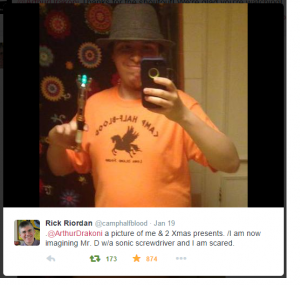 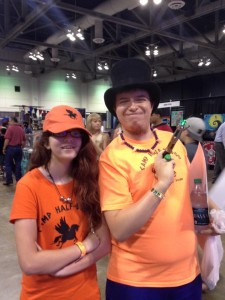 Happy tenth anniversary Percy Jackson and the Olympians. I may not have been there form the beginning, but I met you halfway, and I am a true fan. It’s been an amazing Decade of Demigods, and here’s to another ten years of awesomeness.