Home Film/Televison Ant-Man: a small step in the right direction for Marvel 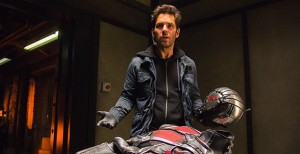 If the incessant flow of Marvel movies has been threatening to exhaust your enthusiasm – or your budget – for seeing superhero films, then this summer’s Ant-Man may well have been one you were prepared to miss.

I almost didn’t see it myself, but finally caught it with my kids on a rainy morning in the dying days of the school summer break.

But here’s the surprise: Ant-Man turned out to be great fun, and even raises the possibility that the Marvel cinematic universe could be kept fresh and enjoyable for some time to come. It is a movie in which Marvel seems to have rediscovered its sureness of touch with its own properties.

The film was the product of a long and complicated development process, which will have raised red flags for some viewers.

Its original director, Edgar Wright – who had pitched the idea with co-writer Joe Cornish as early as 2001 – left the project weeks before shooting. His departure came shortly after he was handed an overhauled screenplay designed to link the story with the rest of the ever-expanding Marvel universe. (A lengthy guide to all this can be found in Luke Owen’s article ‘Development Hell: The History of Edgar Wright’s Ant-Man’, at Flickering Myth.)

The script was subsequently rewritten again by Adam McKay and leading man Paul Rudd. Likable as Rudd is, there is often reason to be wary when a star’s name appears among the creative credits – especially as a screenwriter. Anyone recall Superman IV?

The new director was Peyton Reed, who was something of an unknown quantity given that he had not directed a theatrical movie since the amiable Yes Man in 2008. 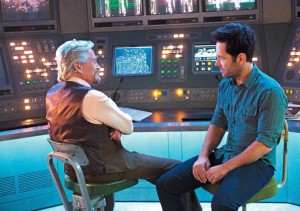 Despite all this upheaval, the final film keeps Wright’s idea of basing the story around a couple of crime capers involving Scott Lang (Rudd). He is an ex-con who discovers the world won’t give him a fair break when he tries to go straight. Tempted into taking part in one more heist, he breaks into a safe in the home of wealthy Hank Pym (Michael Douglas) – and finds the suit that Pym used to use to become the insect-sized superhero of the title.

The surprising success of Ant-Man lies in the fact that it keeps its ambitions, appropriately, small. Lang is a flawed character granted great powers, rather than one of the superhumans who feature in some other movies, and we enjoy some amusing comedy-suspense moments as he comes to terms with his new capabilities.

Inevitably, Lang is pitted against an evil corporation that wants to get its hands on the shrinking technology, in a plot reminiscent of 2008’s Iron Man. But the surprise is that the future of the universe does not seem to be staked on the outcome. And in a great twist inherited from Wright and Cornish’s scripts, the climax takes place in a little girl’s bedroom, with hero and villains dwarfed by an electric Thomas the Tank Engine. Never has Marvel Studios so embraced the implicit silliness of its own material.

There are at least two key pitfalls facing the makers of superhero movies. One is creating an “It-sucks-to-be-a-superhero” story, which wallows too much in the lead character’s anguish. That approach worked well for Batman for a while but was not suited to Man of Steel.

The other pitfall was previously unique to Marvel but will become an issue for DC as its own universe expands: It’s the temptation to become too wrapped up in its own invented mythology, assuming the audience starts off knowing and caring more about the characters and their universe than the average movie-goer really does. That was a problem with Avengers: Age of Ultron, a film in which a multitude of characters each had their few minutes of screen time but we were given too few reasons to care about them.

Despite the studio decreeing an overhaul of the Wright-Cornish material, Ant-Man is relatively unencumbered by connections with the rest of the Marvel universe. Yes, another superhero makes an appearance, and there is the obligatory post-credits scene connecting it to forthcoming movies. (This one is a particularly baffling teaser, too, for those who have not been keeping up.) But essentially this is a stand-alone story which shows how Marvel could keep its franchises fresh and fun.

In contrast to the self-importance and complexity of the Avengers sequel, Ant-Man proves that very often, less is more.