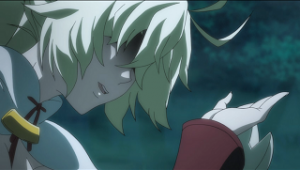 Rokka: Braves of the Six Flowers finale – So it was Nashetania all along, as she duly confesses her Pyrrhic plan to save the world. And then melts into a pile of mud, which Adlet promptly explains as a trick of the demons. So it might have been really her, but she might have been duped, or mind-controlled, or replaced with a double, or aaaaargh.

And then yet another champion shows up, meaning there’s yet another fake. I expect that’ll be Goldov and it’ll be something about wanting to watch over Nashetania. And I don’t think I care much.

This episode had much to remind the viewer about the show’s good points. There was some more great Mesoamerican-inspired visual design on the soldiers’ outfits. Adlet showing once again that being the strongest man in the world isn’t just about lifting weights. A return to the lovely original closing theme.

But if a mystery is a game between the author and the reader (or viewer), it feels like this one ended with the author flipping the table and storming off. All the effort of trying to figure out whodunit has been wasted. I might still recommend this to fans of fantasy, but for mystery fans I think it is fatally flawed. 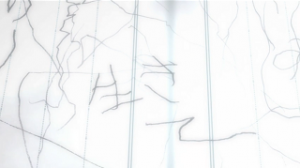 SCHOOL-LIVE! #11 – The zombies have broken in, the school’s on fire, Miki is trapped, Megumi is truly and completely dead, Tarōmaru is beyond hope, and Kurumi’s running out of time. And yet this episode felt hopeful.

Looking back, SCHOOL-LIVE! has been about having to grow up and leave school behind. The zombies are real life, perhaps, trying to bring you down and suck out your dreams. High school is idealized in Japanese fiction because it’s seen as a relatively carefree time of high personal autonomy. Graduation means huge pressure to start conforming to a strict life script of devoting all your time to a job and/or family.

If the zombies are people following the script, the girls are trying to grow up but stay themselves. They can’t hide in the school and pretend they’re going to take classes forever. They have to take control of their own lives.

That’s why Miki has to give the speech thanking Megumi before putting a shovel through her head. Because she’s helped them, but they need to operate on their own to become adults. And that’s why they have to be driven out of the school.

I’m just a little concerned about how they’ve kept pointing out that Miki is a year younger than the others, so it’s only graduation time for the other three… 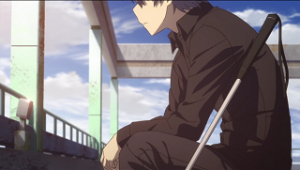 Charlotte #12 – It’s going to be impossible to talk about this show after it ends without making comparisons to Puella Magi Madoka Magica. There was certainly a strong parallel in the revelation that Shunsuke had been repeating the same period of time over and over again, but time travel has shown up plenty in anime. Now, though, with Yū deciding that he wants to change the world and save everyone, and running the risk that he’ll somehow morph into an unstoppable threat? Definitely written with Madoka in mind.

If this is just a copy of Madoka, we can expect that Yū does improve everyone’s lives somewhat, but he dies or otherwise has to vanish. Maybe, with a sufficiently weird combination of time travel and other powers, it can turn out that he is the comet that’s been causing all the trouble. Or he can take it out of the equation completely.

Regardless of how it turns out, Yū with a million psychic powers should be pretty epic. I can’t wait for the last episode. 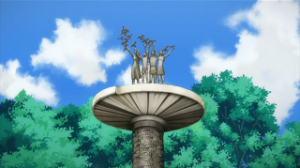 Gatchaman Crowds insight #11 – After working out that directly fighting the Kū is pointless, Hajime works out that the mood powering them has to be changed. And the way to do that is to shock people back to reflective thought with a public execution.

Why it had to be Hajime pretending to be Gelsadra, I’m not sure. Maybe Gel simply couldn’t have been trusted to fake a good battle. Maybe e really is a child and Hajime felt like the danger should be borne by someone more responsible.

The World War II theme is hammered home again when “Gelsadra” gets knocked into that fountain. This happens at Showa Memorial Park, which sits on land used as a military base during the war. The statue shown atop the fountain (#10 on the map) shows a family releasing doves, representing a hope for world peace.

Incidentally, Gelsadra’s assembly place is elsewhere in the park, at the tree in the center of the Minna no Harappa (“People’s Field”, #38 on the map).

Steve finishes his “time machine” with a look at the final three issues of Amazing’s first full year.