SF weddings: here’s hoping yours isn’t like some of theirs!

We are gathered here today, in the sight of the Amazing Stories masthead, to talk about science fiction, fantasy and all things genre related.

You see, my daughter is getting married. In fact, as you read this I will either be running around like a madman, bawling my eyes out at the ceremony or getting completely tanked at the reception. So, I figured maybe now would be a good time to look at some matrimonial moments in science fiction and fantasy. 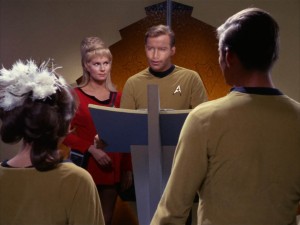 Consider the first wedding that was ever seen in an episode of Star Trek: The Original Series. Episode fourteen of the first season, Balance of Terror, the episode that introduces viewers to the Romulans and features Mark Lenard as the Romulan Commander, begins with a wedding. Captain Kirk, has the happy duty of officiating at the wedding of Lieutentant Robert Tomlinson to fellow Enterprise crewmamber Angela Martine. The happy couple never gets to tie the knot, of course. The Romulans see to that and during the cat and mouse battle in the Neutral Zone Tomlinson is killed when a phaser coolant leak incapacitates him. Despite Commander Spock`s heroic attempts to rescue the injured crewman, Tomlinson succumbs to his injuries and Lieutentant Martine is left crying in the chapel.

Not really a good example. Later marriages turn out to be more successful in the Star Trek Franchise, but it is certainly not an auspicioous beginning. 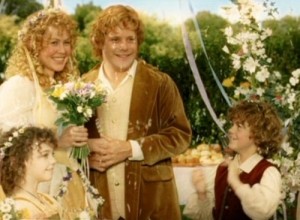 What about fantasy? Fantasy series have lots of weddings, right? Fantasy books and films thrive on pomp and pageantry. Weddings are good things in fantasy, right?

Well, the marriage of Sam Gamgee to Rosie Cotton, his one true love from the Shire goes very well. They move into a big hobbit hole in Bag End and live happily ever after. And Aragorn does marry Arwen, the daughter of Elrond. That`s a happy wedding right? And an interspecias marriage at that!

Then there`s the Harry Potter series. Lots of people getting married in those books and subsequent movies. There even one on-screen wedding between William Weasely and Fleur Delacour. The wedding went off smashingly despite the reception being ruined by news of Lord Voldemort taking over the Ministry of Magic and the arrival of a horde of Death Eaters. So up until then, all went pretty well.

And then there`s Game of Thrones. 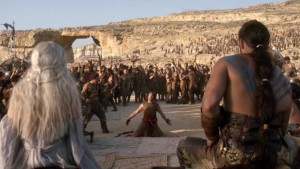 Oh dear. Well, the first wedding we see is the marriage of the Dothraki leader Khal Drogo and Daenerys Targeryan. As a wedding guest explains a Dothraki wedding that doesn`t have at least three deaths is considered a dull affair. There is a lot of killing and humping at the celebration but at least the bride and groom survive and are happy for a time.

Then again, there is the Red Wedding, which goes horribly wrong, proving that Walder Frey is the worst wedding planner in history. Later on in the series King Joffrey weds Marjory Tyrell but eats some poisoned pudding during the reception and dies rather excrutiatingly.

Let`s forget about Game of Thrones. Weddings don`t go over well in Westeros.

What about Firefly? Wash and Zoe are already married but there is an episode, Our Mrs. Reynolds, where Captain Mal gets hitched to a lovely young colonist named Saffron. Of course. Mal doesn`t know it`s a wedding and once the marriage is done he can`t enjoy his state of wedlock without incurring the disapproval of Shepherd Book, As it turns out Saffron isn’t what she appears and immediately tries to kill the entire crew of the Serenity and sell the ship for scrap. It’s not a marriage made in Heaven – more like a marriage made in the “Special Hell”. 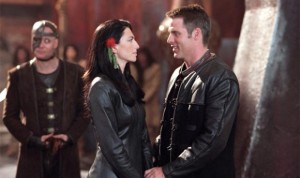 Well, what about John Crichton and Aeryn Sun from Farscape? They love each other. It wasn’t easy maintaining a relationship when your fiance gets twinned into two people, or the other dies, but is then ressurected only to join forces with your arch nemesis, or both of you are blown into tiny little bits by a marauding alien fighter. But true love wins out and you do eventually get married… by a half crazy criminal Banik priest during a pitched battle in the middle of a galactic war shorty before giving birth to their son.

Okay. I think we see a trend here. Weddings and science fiction and fantasy don’t really mix well. It’s good for viewers who are looking for excitement, but not always so good for the happy couples.

It is my sincere hope that my daughter’s wedding is a comparitively dull affair.

I’ll have another post next week. I’ll go back to talking about art.

Assuming, of course, that I survive the wedding.

Fans at Their Best: The 73rd Worldcon Business Meeting Now Called To Order

There is a curious phenomenon not exclusive to science fiction fandom, it is prevalent in pop music worship and other places, by which those afflicted feel a need to establish rivalries. The Star Wars fan who vociferously attacks all things Star Trek. And vice versa. The Star Trek fan determined to argue against every facet […]

Ultrasonic Welding: A Promising Technology to Weld both Plastics and Metals