A Business Meeting of fans is anything but boring!

And so it began, the WSFS Business Meeting, an event for the ages.  Presaged by concerns over disruption, tasked with addressing Puppygate, freighted with the awesome responsibility of making decisions that could affect fandom FOR ALL TIME!

And fortunately, for the first time ever in the 70+ year history of the convention, all fully recorded for public display and disclosure.

Broken into five parts, Thursday’s Preliminary Meeting is now available for viewing on Youtube, on the Worldcon Events Channel.

If you have ever wanted to see how fans get things done, boy howdy is this your opportunity!  You may think that this will be boring parliamentary procedure with motions for this and points of order for that, a ginormous copy of Robert’s Rules of Order on display on a lectern at the front of the room, bent, white-haired oldsters licking fingers and turning pages searching for obscure references, speakers droning on and on in full filibuster mode – but you’d be wrong.  The WSFS BM is anything but boring.

“Motion to amend the amendment!”  “Groan”

Will that guy in the brown shirt ever get called on to speak?  Will George Mitchell get a thank you for 20 years of anonymous service? Will 4/6 or EPH even be heard?  How many times will Ben Yalow take the podium? 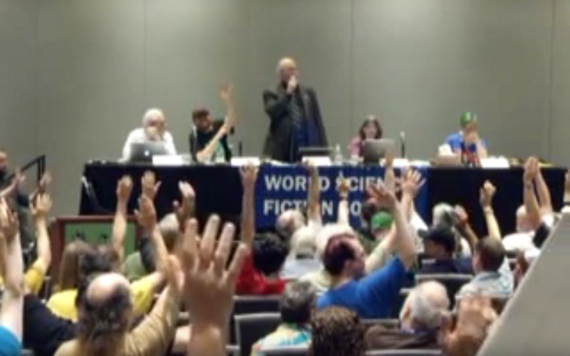 By vote count, approximately 200 members attended this initial meeting. During the first segment of the video, you’ll get an idea of how many attendees are joining the BM for the first time (a good-sized contingent apparently) (at about 26 seconds in); applause and thanks from the attendees; there was only one mention of personalities related to the puppies and this was responded to by the chair as inappropriate (pretty easy to see that anyone could have attended and gotten a fair shake if they followed the rules of decorum). Also pretty easy to see that while things did run according to the rules, the Business Meeting does not have to be dry and boring. Quite a bit of laughter punctuated the discussions.

You’ll get a really good sense of the WSFS fan community by watching these videos.  Thoughtful, articulate and passionate, while exhibiting a respect for each other that is all too frequently absent elsewhere.

You can play all five segments in order here or watch the individual segments below:

There and Back Again, or, How I Got Scared Into Science Fiction