In a YA market saturated by dystopias and supernatural romance, one novel dares to be something different. 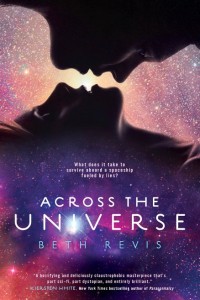 The book begins a couple of decades in the future and follows a girl named Amy Martin. Her parents have been selected as part of a mission to colonize a planet in the Centauri system, which will take about 300 years to get to, and Amy’s coming along for the cryogenically frozen ride aboard the Godspeed. The book then fast forwards 250 years and we meet Elder, the leader to be of the ship-born crew. He’s always been fascinated by the frozen crew, but especially Amy.

Before long Amy finds herself awoken and thrust into an unfamiliar world. Sure, everything runs on time and advances in technology have been made, but most of the crew seemed perpetually drugged up to their eyeballs. Not only that, but everyone has mid-tone hair and skin, making Amy’s pale skin and red hair stand out more. There’s just something not right, and as if that wasn’t enough now there’s someone killing frozen crew members. Amy, Elder and their friends will have to get to the bottom of things and fast.

This book was an impulse buy, or at least, in so far as I impulse buy. I always like doing a bit of research and knowing what I’m getting into before I hand over money. Anyway, I found this book very enjoyable, and I soon found myself purchasing the other two books in the series. As I mentioned above, it is rare to find a straight up science fiction novel in the YA genre, especially one set in space. In interviews Beth has talked about how hard it was to get the book published due to how reluctant so many publishers are to publish YA science fiction that isn’t dystopia. The alleged reason being that such works won’t sell, but if you never publish such books then it’s kind of a self-fulfilling prophecy.

Sorry, got a little side tracked. So, first of all hol-e-shit, this book made cryonic preservation sound utterly terrifying! Amy is still somewhat conscious while on ice, and the first few chapters from her perspective give some bone chilling descriptions. Oh, did I mention that the chapters are alternately narrated from both Amy and Elder’s points of view? Speaking of narration, for those of you like me who prefer your books in audio form, the audiobook is narrated by Lauren Ambrose and Carlos Santos. I found that both of the narrators did an excellent job bringing the story to life.

I liked how, even though things had clearly gone wrong, the ship’s crew  still remembered their original purpose, hadn’t descended into savagery and hadn’t forgotten about the rest of the universe. With the generation ship stories you always hope that the author can keep things interesting; since there really isn’t anywhere else to go but the ship. Fortunately, the Godspeed is a very interesting ship with never a dull moment. I enjoyed the little details, like how it’s the size of Iwo Jima and thus had to be constructed in orbit. For that matter, I found that overall the science of the books checks out pretty well. Having said that, there is a part that relies on the “adrift if the engine stops” misconception. Don’t worry, this is explained and there’s a very good explanation, but you don’t find that out till the sequel.

Now, there were a few elements I felt didn’t quite add up. For example, the mission of the Godspeed is being funded by the Financial Resource Exchange, or FRX for short. As the name suggests, the mission is to establish a colony and look for resources that could help end the Second Great Recession. That seems a little odd given that it takes 300 years to get to Centauri-Earth, as the planet is known. Clearly there’s something more to it than we’re being told. Also, and this is comparatively minor, it’s implied that Amy’s boyfriend back on Sol-Earth was either on the chubby side or otherwise out of shape. Amy, by contrast, is athletic, a long distance runner and good looking. Granted, maybe it was about personality rather than appearance, and it’s certainly not impossible. Nevertheless, it still struck me as a tad odd.

Well, that’s enough negativity for now, let’s get back to the positive. I thought that Amy and Elder were both well written characters. They both have their personal struggles and trails to over come, but they’re never bogged down in self-pity for an extended amount of time. I also enjoyed how their relationship progressed at a slow and natural rate rather than falling into the “love at first sight” trap that so many YA novels succumb to. The various bit of ship born slang were nice touches as well. This is Beth’s first novel, which means it has about three or four different covers, and personally I think they all look pretty good.

This was intended as a stand alone novel, but fortunately Beth Revis decided to write sequels. It’s pretty obvious that I enjoyed this novel, and I’m sure you will too.

The Apollo Program, A Personal Journal: Hand-Held Calculators (Circa 1968)