The Baby Merchant, an expertly crafted psychological crime drama with a modicum of science fiction, a book which reads with the page-turning magnetism of Stephen King, Thomas Harris or Michael Crichton. 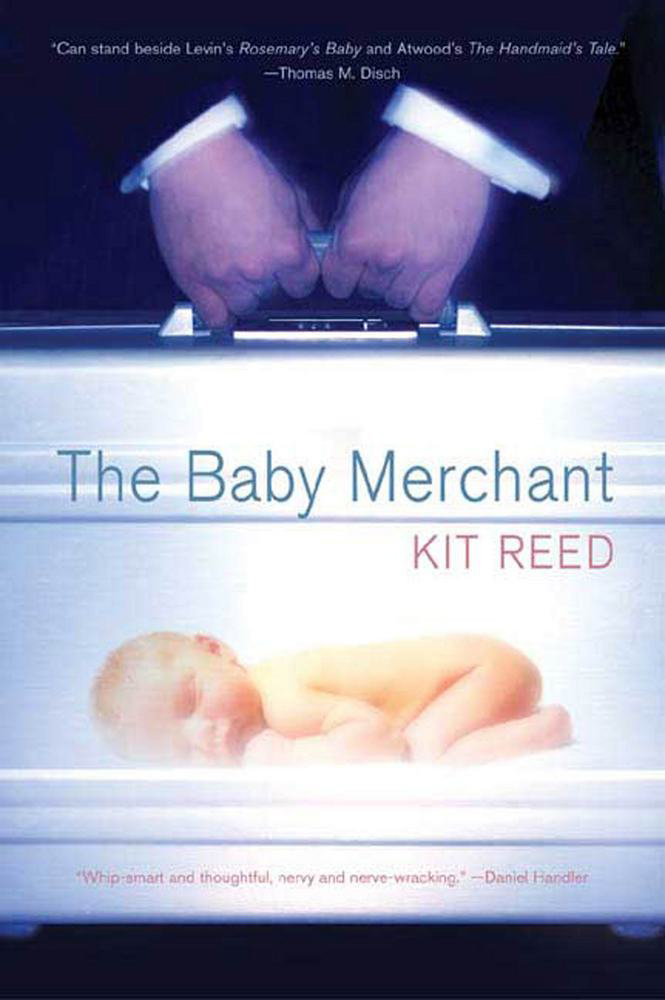 Recently I revisited Ken MacLeod’s Intrusion, a serious near-future SF novel published in 2012, in which a central theme is government interference in reproductive rights. This made me thing again of Kit Reed’s The Baby Merchant, an expertly crafted psychological SF crime drama, a book which reads with the page-turning magnetism of Stephen King, Thomas Harris or Michael Crichton. Published in 2006, it is set in the east coast states of the USA an undefined number of years into the future. Sufficiently far that the birth rate is in serious decline, experiments in human cloning have resulted in ill-formed children, America has, in the interests of ‘Homeland Security’, effectively closed its borders, and, ditto, mandated that all babies be chipped with RDIF tracking devices in their skulls. In other respect the America of The Baby Merchant could be now.

Tom Starbird steals babies for A-list clients who have put career before family for too long. He is young, professional and successful, discreetly providing a service for those who have almost everything. Starbird delivers top quality product… objectifying everything in business terminology to prevent himself becoming emotionally involved, and justifying his actions by believing he is doing good; taking babies from those who do not want them and putting them in the arms of those who do. And all because Starbird knows what it is to grow-up unwanted; his poet mother, Daria, has always resented the way she imagined he prevented her from becoming a celebrated writer. In his mind Tom is not a kidnapper. He is saving others from their version of his own damaged childhood.

Sasha Egan is an artist, early 20’s, inadvertently pregnant. A baby will ruin her chance of studying in Venice, so she is in the Newlife home for unmarried mothers – her lapsed Catholicism will not condone an abortion – waiting to have the baby and give it away. But the father turns up with offers of marriage, and Sashia, suspecting he has been sent by her deeply estranged grandmother, panics and flees…

Jake Zorn is the public conscience of Boston, whose TV show, Exposé, unveils the corruption of the great and the good. For ten years he and his wife, top attorney Maury, have tried to start a family. Now biology, age and a mental breakdown have ensured every legitimate avenue to parenthood is closed.

The Baby Merchant is about what happens when the lives of these characters intersect. It is written in slick prose which easily switches between present and past tense, between various characters’ points of view, and which in the first third, partly narrated by Starbird, is as gripping as they come. Though the book reads with the compulsiveness of a thriller almost all the action is internal. Comparatively little happens and the novel does not have the plot twists of a thriller. Rather it is about what happens when good, intelligent people are driven to extremes, even outside the law, by their own barely comprehended but furiously undeniable psychological and biological needs. The main characters, particularly Starbird and Sasha Egan are superbly evoked; there are no clear villains here, just people surprised by themselves, forced to realise they have become something alien to their own intent. On that level, as an absorbing character drama which is also a crime story, The Baby Merchant is first rate.

There are some small infelicities which could easily have been fixed with more attentive editing – for example chapters 7 and 11 are functionally identical, the phone conversation in the former being essentially replicated in a face to face conversation in the latter. More troublesome is that Reed doesn’t once address how this America of chipped babies has been accepted without, seemingly, a single hint of discontent. Liberals and libertarians would reject chipping/tagging as an invasion of civil liberties. Conservative Christians would brand it the ‘Mark of the Beast’. And concerned parents of all persuasions would balk at the unknown health implications of having a wireless transmitter permanently implanted in their offspring’s skull. It is a plot catalyst which needs far more scene-setting than it is ever given here.

As a drama that reads like a thriller, The Baby Merchant ultimately lacks a sufficiently satisfying punch to resolve the relentless suspense of the preceding 300 pages. It may be what would happen in ‘real life’, but the pay-off proves something of a disappointment on paper. Nevertheless The Baby Merchant is a very entertaining novel from a highly accomplished writer – not without good reason has Kit Reed been nominated three times for the James Tiptree, Jr. Award. Just expect that it if should ever be filmed – the cover blurb on my edition has Thomas M. Disch essentially pitching a movie version by positively comparing it to Rosemary’s Baby and The Handmaid’s Tale  – Hollywood will turbo-charge that ending.

A discussion of “post-historical” science fiction, based on The Unpublished Adventures of Teofilus Jones by Fedosy Santaella,

Yoshihiro Togashi and Growth As A Creator