Warning: The story recommended in this review contains satire that may cause indigestion in some readers, particularly those who are currently afflicted with Puppy Mania.

It is a testament to the skill of William Tenn (pseudonym of Philip Klass) that his satires written fifty plus years ago not only remain relevant and funny, but that in some cases they seem even more appropriate today than when they were written. Such is the case with “The Masculinist Revolt,” a hilarious satire of gender-political militancy. A story that is possibly more pertinent now than it was then, and a story that seems to me to be a fine antidote (even if only momentary) for the poison coursing through the SF community and our culture and politics beyond. I invite you to take a step back from the Puppy madness (and associated politics prevalent in our tinderbox culture) and have a laugh at the situation, enjoy a joke in which we are all the punchline.

I see that some of you already have your weapons drawn at the simple hint of the territory you are about to enter. Put them aside, they won’t help you here. It is no coincidence that the only place you will find this story still in print is Tenn’s collection titled Immodest Proposals. That title plays off the famous Jonathan Swift satire, A Modest Proposal, in which he proposed selling poor Irish children as food. It was satire. Some people didn’t get it. Some didn’t get this story when Tenn wrote it in 1961. Some won’t get it now. If you are prone to react to satire as an effrontery to all you hold dear, move on, don’t read “The Masculinist Revolt.”

The story is told as a historical record of the events from 1990-2015 known as the Masculinist Revolt. Historians, we are told, disagree as to the causes of the movement; some seeing it as a long overdue sexual earthquake, others claiming that it was simply one man trying to improve the bottom line of his men’s clothing business (sound familiar?) In any case, Mr. P. Edward Pollyglow lamented the decline in his business which he attributed to the rise of unisex clothing. 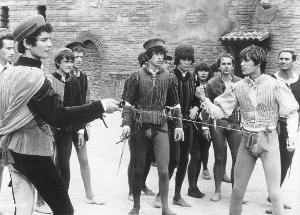 In desperation, Pollyglow searches for a fashion so intrinsically male and virile that women can’t possibly co-opt it. His solution – the codpiece! For those of you who don’t know what a codpiece is, think of the bulging, often exaggerated, covering over men’s crotches as seen in many Shakespeare plays. In more recent times, these show up in SF and superhero movies like A Clockwork Orange, Star Wars and Batman.

Pollyglow, thinking he needs to do this not only for his business but for the salvation of the world, proceeds with a sales campaign extolling the differences between men and women and encouraging men to “join the masculinist club!” Without going into so much detail as to spoil the story, I will simply say that things escalate from there, eventually resulting in a major political movement that attempts to repeal the 19th Amendment. 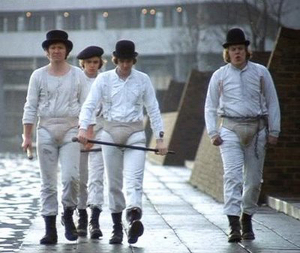 Lest you think that this is strictly a satire of the reactionary right, think again. Tenn’s satires were usually two edged swords, as evidenced by the responses he received in the early 60s. As he stated in 1968, “I have lost one agent and several friends over this story…” One woman told him, “This castration-nightmare is for a psychiatrist, not an editor.” Someone at Playboy Magazine declined the story (some say it was Hugh Hefner himself) because he thought it was a satire of the Playboy empire. Tenn’s agent dumped him as a client for writing what she considered vicious trash. And a male friend thought Tenn had written a manifesto for the men of the world. Some didn’t see the satire at all, others misunderstood Tenn’s message, which in his own words was to show the “…nuttiness either of the two (genders) could develop as it wriggled in the throes of gender-political militancy.”

It took four years before Tenn (an established and well respected writer by that time) found a home for this story in F&SF. And it was hardly the first time he had trouble with one of his satires rocking the boat. Nobody wanted to touch “Brooklyn Project” during the lead up to the McCarthy era, yet it is now a celebrated classic. We learned a lesson from McCarthyism (or maybe not), so that story went on to be celebrated, but gender issues remain a topic too hot to handle. Tenn noted, “I have written more about sex than any science fiction writer alive without once having written anything capable of exciting a granite slab. And I have discovered that it isn’t sex that bothers people, it’s sexual identity.” I doubt the first part of his statement still holds, other SF authors have likely surpassed him in writing about sex, but the second part of his statement has not changed.

Now, I realize that some people have been careful to frame the Puppy conflict in terms of Hugo integrity, not as being about politics. And while I love the Hugos too and am disappointed that they are being tarnished, the reality is that repairing the Hugos is a relatively small problem compared to the ongoing culture war. The Hugos are but a casualty in that larger war. But, as I promised myself, I am not going to get stuck in that morass, so I will stop there. All I want to do is point out a little known, yet quite excellent, political satire by an author I consider to be science fiction’s best short form political satirist – because I think we could all use a laugh just about now.

For those interested in reading “The Masculinist Revolt,” your best option is to purchase a copy of Immodest Proposals: The Complete SF of William Tenn, Volume 1 published by NESFA Press. It is one of the most treasured collections in my library, containing Thirty-three exceptional stories including classics like “The Liberation of Earth,” “Brooklyn Project,” “Venus and the Seven Sexes,” “Child’s Play,” “Down Among the Dead Men,” and “On Venus, Have We Got a Rabbi.”

While I’ve been reading SF for ages, I haven’t participated much in the fandom aspects of the genre. I’ve only been to one other convention and I only made it for a single afternoon. Needless to say, three days seemed like a marathon.