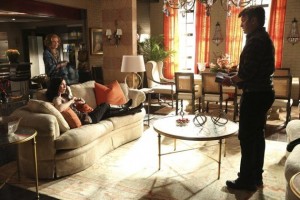 Castle has always played on Nathan Fillion’s background in sci-fi shows. There was the episode where he was in fancy dress as his Firefly character, and the one with the time traveller. Plus pretty much every week Castle has a out there explanation for every murder investigation, which Beckett always seems to find a more down to earth reason. Well this week’s episode is no different. *Spoiler alert*

In The Time of Our Lives Castle and Beckett joke about what they would be doing if they hadn’t met each other. Beckett would be the captain and Castle would have two award winning books. After chasing down a lead, Castle finds himself holding a mysterious artefact, after a gas canister is thrown at him and Beckett and they are separated, Castle finds himself alone and all is not what it seems to be. When he heads back to the precinct he discovers that no one there, including Beckett, know who he is – and they certainly aren’t  engaged. His soon discovers that everything has changed. His apartment, his daughter’s hair and his mother’s career. To make matters worse, he is a failed writer after his last book was a flop. He has to find a way to get back to his real reality but helping Beckett solve the case in the alternative reality. But when he solves the case he is still stuck there, that is until he proves his love for Beckett by taking a bullet for her.

Unlike the other episodes, Beckett doesn’t try to prove him wrong about his theory when he eventually returns. Although he seems to imply that he believes it was a dream rather than a real alternative life experience. It’s a classic tail (think Freaky Friday, Family Man) of seeing a different life and knowing that the one you have is perfect, but it is nice to see Castle giving Nathan Fillion fans like me a taste of what we love.