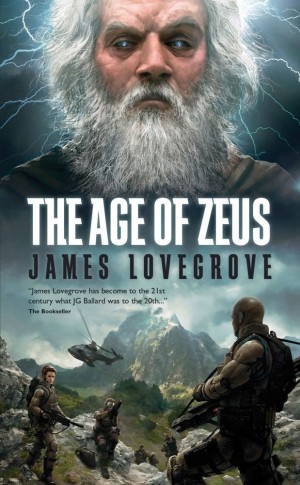 Last spring I was introduced to the world of godpunk through James Lovegrove‘s Age of Shiva, the final book in his five book Pantheon series. It was a military SF story about a superhero team modeled after Hindu deities. I was pleasantly surprised on how much I enjoyed the novel because I had no interest in reading any of Lovegrove’s Pantheon books and probably still wouldn’t have picked up a copy if I didn’t win one from My Bookish Ways. After finishing Age of Shiva, I decided to make an effort to find and read another of Lovegrove’s books and since the Pantheon series is made up of stand-alone novels I wasn’t picky about which one I came across first. A b-day splurge at Half Price Books ended with me owning a copy of the second book in the series, The Age of Zeus.

Quick disclaimer: since this book was originally published in 2010, I am going to be pretty loose about spoilers for this four year old book. If you still want to read The Age of Zeus, I would stop here.

As you can guess from the title, The Age of Zeus focuses on the gods and monsters of Greek mythology, which are probably more well-known to most Westerners than the Hindu deities in Age of Shiva. That is kind of sad once you think about it since Greek paganism is as dead as Latin while Hinduism is an active and vibrant world religion with almost a billion followers. Well enough social commentary, the book is set a few years after the Greek gods mysterious return to the world. They have defeated all opposition to their rule and have established order and peace on Earth. The cost, however, meant the death of millions of people, divine punishment if anyone should step out of line and constant surveillance by the 100-eyed Argus. While wars and environmental destruction may be things of the past, not everyone is happy with the new status quo. London police officer Sam Akehurst has a personal reason to hate the Olympians and it is her vendetta and skills that attracts the attention of a secretive businessman who has a plan to bring down the gods. With the use of nanotech, exoskeletons and advanced weaponry, he proposes to make Sam and other candidates into “Titans” so they can wage a guerrilla war against Zeus and his cohorts and free humanity once again to determine their own future.

Reading that description you may mistake The Age of Zeus for being anti-religion, but I think the book has more of a secular libertarian theme. Governments and the media (there is several digs at Fox News for their pro-Olympian stance) in The Age of Zeus just want to placate the Olympians so they don’t obliterate anymore cities. It is left to individuals, backed by private enterprise, who take the fight to the gods. This is especially apparent in the last few pages of the book, but not knowing the author’s politics and religious beliefs (and some brief research didn’t turn up much) I can’t comment for sure. If it is anti-religious in any sense it is anti-theocracy. Lovegrove seems to be making the argument that no government should decide what god or gods an individual should believe in and as a Catholic myself this is a stance I fully endorse.

Of course maybe I am just reading way to much into this military SF than I should be. I found The Age of Zeus to be an entertaining and fast-paced read. Lovegrove  came up with a plausible scenario of how the Greek gods could use their powers and monsters to dominate the world, while leaving human governments with just enough autonomy that they can placate their citizens by diverting funds from the military to improving infrastructure, healthcare and consumer goods. I also felt the origin of the gods was a bit easier to swallow than what was presented in Age of Shiva, but perhaps I am being picky there. I enjoyed the comedy interspersed throughout the story and I even wrote down one memorable line that I actually want to quote because I found it to be pretty powerful: “There’s only one place where death is worth more than life…and that’s on the Scrabble board.”

That all being said I did have some issues with the story. The main character Sam is sort of a Mary Sue, with characters following her lead despite Lovegrove never really giving us that much of a believable reason about why she is so great. Some of the other characters weren’t well developed either and the Southern devout Christian who really has a problem with homosexuals was a little over the top for me. There is also a plot hole that took me out of the story momentarily. Without spoiling to much, there is a character in The Age of Zeus who is a genius geneticist and one day, while working in his college lab, he is able to create an near indestructible mouse. Upon finding out about this his university immediately expels him and his wealthy, weapon manufacturing father tries to convince him to just let it go and instead enjoy his life as a trust fund brat. Wait, what? It seems a tad unbelievable that a major university wouldn’t want to be on the ground floor of this major scientific breakthrough or at the very least his father would see the potential bilogical weapons he could patent and sell. Instead of solving real world problems, however, its used to create gods (and there’s the spoiler).

Although I can still call The Age of Zeus a “good” book, it pales in comparison to Age of Shiva, where many of the issues mentioned above were missing. At this point I would bemoan the usual drop in quality found in sequels, but hold on, remember when I said The Age of Zeus predates Age of Shiva? I’m reading these books out of order, meaning Lovegrove’s Pantheon series has improved over time. I can’t think of a better reason then to pick up a Pantheon book and I hope in the future to read more of Lovegrove’s SF stories.