What happens when you DO judge a book by its cover (art).

Recently I wrote a post about book length and how the publishing industry changed the science fiction book from a lot of slim volumes to a few bloated mammoth tomes. In doing the research for that piece naturally I read a few of those slimmer volumes of science fiction from the past. Since I am an artist I took particular notice of what was on the cover of those volumes.

So, here are the last three books I read and how they were packaged. 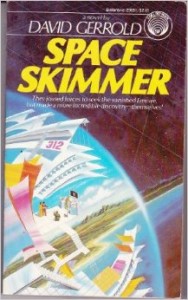 SPACE SKIMMER is a book written by David Gerrold back in 1972. It tells the story of a disparate group of humanoids from a future who band together on a fantastic starship built by the architects of a long dead Galactic Empire. The edition that I had was published by Del Rey in 1981 and it featured cover art by Ralph Brillhart. Brillhart was a commercial artist who worked for various publishing companies from the 1960’s through to the early 1980’s and in his time he produced cover art for a good number of science fiction paperbacks.

His work for Space Skimmer produced an image that deftly captures the complex nature of the spacecraft that Gerrold describes within. The skimmer itself is not your run-of-the-mill spaceship. It’s very different and that is captured qhite well on this cover, much more so than an earlier edition which depicts the ship as somewhat chunky and inelegant.

He does not, however, depict any of the main characters which is where the strength of Gerrold’s book lies. They are visible but only as tiny figures seen from above. It would be interesting to see an edition which actually depicts the diverse cast of the book. From a marketing standpoint I don’t know if that would be the way to go but from a personal one, it’s an approach that I would very much like to see. 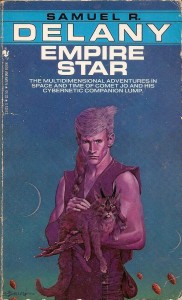 EMPIRE STAR is a novella by Samuel R. Delaney. It was written in 1966 and has frequently been packaged as one of two novellas in the infamous Ace “double novels”. The copy I read was a Bantam edition from 1983 which is beautifully packaged with cover art by Wayne Barlowe. Barlowe eschews depicting spaceships as an earlier edition’s cover did, and focuses instead on the book’s protagonist, Comet Jo.

His portrait of the character is pensive and sensitive, rendered in a magenta tone against a blue-green background featuring a subtle moon and floating chunks of what I assume are asteroids. It’s an understated statement about the book and in many ways is more appropriate then spaceships zipping throgh the void, which does happen a lot in the novella but isn’t really what the story is about. 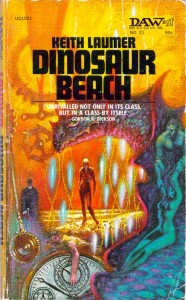 DINOSAUR BEACH by Keith Laumer was written in 1971 and is a classic science fiction tale of time travel. It has been published several times in multiple editions and has sported covers by some fairly distinctive artists.

The edition I happened to have is the first paperback edition issued by Daw in 1971. It sports a cover by the great Frank Kelly Freas.

The majority of cover artists tend to depict a fairly straightforward image of the main character (or characters) jusxtaposed with a dinosaur on a beach. Freas does have a dinosaur but it is heavily stylized as is most every other element on his cover piece.

The book is more about the complexities of time travel than it is about dinosaura and Freas attempts to encompass all of that in his cover. The artwork is colorful amd moodily complex it does not have the focus (or “hook” if you will) that some of the other covers do. To be honest a cover like that would probably not make it past an art director’s desk these days, but Freas had more freedom in his day and the result transcends the effort merely to hook the reader and ventures into the realm of visual storytelling.

I’m still reading those older science fiction books that I talked about in my previous blog posts. They’re fast reads but extremely enjoyable so I will likely be revisiting this topic again in a couple of weeks with three more selections.

Over the past several years I’ve been watching a number of trends within the science fiction field.  Some fill me with hope and anticipation, such as the strong movements pushing for greater equality in a number of areas, or the re-defining of Space Opera and the nascent emergence of PULP!.  Others fill me with trepidation […]

Book Review: Man With The Iron Heart by Mat Nastos