For all kinds of (good) reasons, we’re probably stuck with this version of history 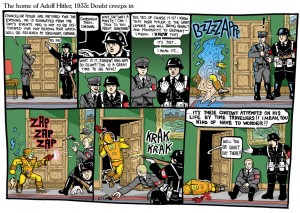 Ask anyone what they would do if they had a time machine and nine times out of ten they will say: go back in time and kill Adolf Hitler. On its face it seems like a smart idea. Hitler and his cronies were responsible for starting one of the most devastating wars in history and caused the deaths of millions of civilians for being “racially inferior”. So many lives could be saved and atrocities avoided by the action of just one gung-ho time traveler ready to set time right with a single bullet.

Or not? As good as it sounds, killing Hitler would be a waste of your time. Here are four reasons why:

1) Everything You Are Doing Is Probably Illegal 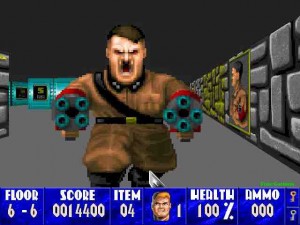 The above should really go without saying. Modern society is structured in a way that we don’t allow people to carry out justice on their own terms. We have an impartial justice system that presumes everyone is innocent until proven guilty. Meanwhile, we have designated individuals who uphold the law and protect citizens from criminals. That whole system is upended if any yahoo can jump into time machine and shoot whoever he doesn’t like.

Now I know what you are saying. Come on this is Hitler we are talking about. Who really is going to stop me from shooting him? Well for one thing the people of the past, because murder was still murder a half a century ago. Also, you are probably going to have to kill Hitler before he became…well Hitler. So we are thinking somewhere before 1919, when he joined the German Workers’ Party, and 1889, when he was born. If you go back then and kill Hitler, you will probably be tried for murder if you are caught by the police. To them the only thing you did was kill a young man in cold blood. Also some free legal advice: don’t tell them you are a time traveler. It  won’t help your chances in front of the judge.

If you kill Hitler and somehow defy all paradoxes and make it back to your present (which would mean you definitely didn’t change a damn thing, but for the sake of the article lets keep going) don’t expect a ticker tape parade. My guess is time machines will be a bit more complicated than the hot rods people used to wrench on in their dad’s garage. No one is just going to hand you the keys to a time machine and tell you to have fun with all of space and time. You will probably have to pull a Doctor and steal it. So you will come home a thief…and perhaps a murderer. Despite how we remember Hitler, we don’t execute people before they commit a crime. So while it might not be a popular decision, a prosecutor would have no choice but to try for murder.

But then again, this is Hitler we are talking about. Killing him would still be a “good” thing. Right? 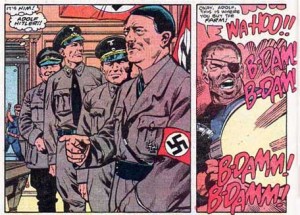 Remember when I said you would have to kill Hitler before 1919? Anyone thought about killing him as a baby? Do you feel like you are a good person if you drown a sinless baby in their own bath water? Can you stand the wails of a mother who just lost her child?

Extreme example I admit, but murder, regardless of when you decide to do it in someone’s personal timeline, is wrong. Not just illegal, morally wrong. Almost every single major religion and philosophy would agree with me. O sure we have carved out a bunch of exceptions and I am sure you are shouting some at your computer right now (and if you are please stop, you are upsetting your co-workers). Self-defense comes to mind. That has been expanded to cover the protection of others and the millions you could save by killing one man certainly outweigh any moral concerns.

And yet if we accept that we can go back in time and change history, we by our actions show that history is not set in stone. The actions of a single person can thus have great consequences down the road. We reject predestination and we have taken the fate of not just ourselves, but all of humanity into our hands. Can anyone really say they deserve that power? And when that power is offered to them they immediately resort to killing? Kind of disturbing in my opinion. What exactly does that say to us as a culture when we so quickly come to death as a means of making the world a better place. Why not get Hitler some therapy or else show him how cool it is to be a science fiction writer?

And more importantly, if you can change history, then anyone can change history, even their own. Hitler’s path could have gone in a different direction without outside interference. After his death he could have been remembered in history as a health nut and pioneer of animal rights and be survived by his gay, Jewish partner from Ethiopia. You have to allow someone the chance for redemption. Even Harry Potter gave Voldermort one last chance.

Of course, illegality and morality aside, maybe it would be worth it. You could save millions of lives just by sacrificing one, because obviously the last half century was all Hitler’s fault, right? 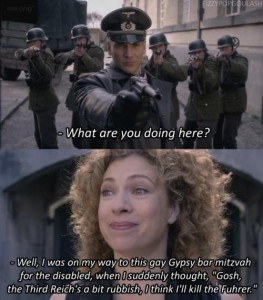 There is something called the Great Man Theory of history. To sum up, certain people are just more special than others, and their actions have a significant impact on history. Such a theory has fallen out of favor, especially as we gain a better understanding of the intangible forces that effect history like economics, sociology, etc. Then postmodernism and chaos theory came along and, as Evans’ states in his book Altered Pasts, people rejected “determinism”  and promoted the belief that individuals do, by the expression of their free will, have an impact on history.

The problem is those intangible forces don’t just go away. Hitler was very much a product of his time as Stalin, Churchill or Roosevelt were. The German defeat in World War I, the unfair Treaty of Versailles, the weak Weimar democracy, the economic hardships of the Great Depression, the ingrained anti-Semitism that infected not just Germany, but all of Europe…you would need an army of time travelers to fix all of these problems.

Even without Hitler, it is just as likely some other demagogue would ride the wave of history to the top spot of Germany and start all the same horrors. The faces and details might be different, but the broad strokes of history would be the same. Millions would die, many for arbitrary reasons, and a new world would be born in atomic fire. You would have failed to stop the events you tied to Hitler’s life. Perhaps way down the time road we may see significant changes to outcome of history and perhaps it would be a better world, but the immediate consequences you tried to avert would still happen.

Hold on, I think I see the major flaw of my argument. If history is chaotic and infinite possibilities are available, then it is still possible a better world can come about by the death of one man. Fair enough, but then again… 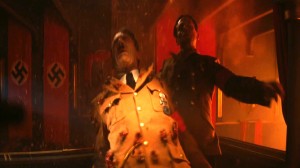 In 1998, actor Stephen Fry won the Sidewise Award for his novel Making History. In this world the character makes Hitler’s father infertile, thus Hitler is never born. Inadvertently he allows a smarter and more charming figure to become head of the Nazis and Germany allowing for a German victory in World War II and worse world overall. This book symbolizes the problems that can occur when anything can happen. Even with the best intentions (and we know which locale uses that instead of asphalt on its highways) you can make things so much worse, as the main character from King’s 11/22/63 found out to his detriment. In fact I could probably name dozens of time travel stories that point out how unforeseen consequences emerge when you screw with the past.

You don’t even need an Axis victory in World War II to make things worse. A militarized, nationalistic Germany carrying out pogroms against Jews and other undesirables within their borders while participating in a multi-polar Cold War with the west, the Soviets and Japan can be just as bad…especially when you consider how many more nuclear weapons there could be and the more triggers that can go off. Even without nuclear fire, would either of these worlds have any conception of human rights? Without that, would we have civil rights, feminism, gay marriage or any of the other social changes we experienced in the last century?

There are just so many worse case scenarios that no one can say with any certainty how history will turn out. The risk is so great anyone decides to take that chance is not just a criminal, but insane.

I will admit, I would love to have a time machine. I wouldn’t, however, use it to change time. I would go back as a passive observer. I would see bands before they were famous or listen to Lincoln argue in court when he was just an unknown circuit court attorney. I doubt my promise not go back and intentionally screw with the past would convince anyone to hand over their shiny new time machine, but its worth a short.

The important thing to remember is that despite all appearances to the contrary, this timeline is probably the best outcome we could have hoped for. Lets remember the past as we build a better future, instead of trying to change it.

Farout: The Farthest Object Seen In Our Solar System