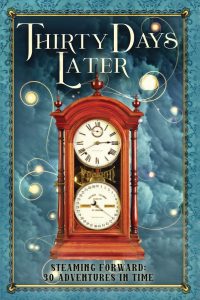 Thirty Days Later from Thinking Ink Press, the sequel to Twelve Hours Later, is a steampunk anthology from authors who have appeared at the Clockwork Alchemy steampunk convention. What is most unique about this anthology is its theme. Each of the fifteen authors in the anthology contributed two stories.

The second story is set in the same universe and follows the same characters, but time has jumped ahead thirty days. You can thus read Thirty Days Later in two different way: either as the stories are laid out (with the starting fifteen, followed by the next fifteen which are set thirty days later) or you can just skip to part 2 after reading part 1 by using the table of contents to find the right story. So the question is now: does Thirty Days Later take advantage of its format? Well…

As an alternate historian, I would be remiss not to discuss Harry Turtledove’s “Visitor from the East” and “Peace is Better”. Both follow the governor of Jefferson (which in our timeline was a proposed American state that would include southern Oregon and northern California) who first welcomes the visiting the Yeti Lama to his state and then thirty days later, does a photo op with a Japanese car salesman who during World War II bombed Port Orford. O yeah, I did mean to write “Yeti”. The governor, in fact, is a Sasquatch as both stories are set in a timeline not just where Jefferson is a state, but where big and small humanoid species exist side by side in relative peace. Its a funny story, if you like Turtledove’s humor, that is light on steampunk, but was certainly one of the better written tales of Thirty Days Later.

Some other stories that stood out to me include “Ghost and the Birdman”/”Ghost Bets the House” where a gangster from Chicago finds a conscience in New Orleans, “The Light of the Moon”/”The Shadows of the Moon” by Michael Tierney where an astronomer thinks he has discovered an alien civilization on the Moon and “The Clockwork Writer” by Steve DeWinter which followed two brothers who find a clockwork robot that seems to predict the future, but in way that strongly reminded me of “The Monkey’s Paw“.

On the whole Thirty Days Later was an okay anthology. Some of the stories made good use of the thirty days later concept, while others only lightly embraced it (such as “Two Days in June” by Sharon E. Cathcart) or some just did without it altogether (such as “Airship”/”Dragon” by Janice Thompson). I already mentioned that Turtledove’s stories were light on the steampunk, but several others probably couldn’t be classified as steampunk either and one or two made only minor efforts to put themselves into the genre by simply have a character say “I caught an airship flight” and that was it. I’ve said it before and I will say it again: airships are not enough to alter history.

The biggest issue I had with Thirty Days Later, however, was how certain stories didn’t have any resolution whatsoever. “A Linear Mystery”/”Minotaur in the Mist” by TE MacArthur is a good example of this. It started out well, with a race to find a treasure that could be guarded by the mythical Minotaur, but literally ended in part 2 with the characters about to discover whether there actually is a monster. We don’t know what they found or if they survived and I assume we won’t learn until Sixty Minutes Later (which I guess is what the next anthology will be called). Maybe I’m crazy, but I think short stories, even ones that follow the theme of Thirty Days Later should be self-contained and not leave you with a cliff-hanger. Its one thing for novels to do that, especially if its in a series and we are told there will be more stories afterwards, but its harder to get that message across with short stories.

That all being said, Thirty Days Later is still an entertaining anthology. I enjoyed most of the stories, even the questionable ones, and there really aren’t any I would say are “bad”. If you like steampunk or speculative fiction set in the past, you will enjoy Thirty Days Later. It had an intriguing concept and I would love to see more creative anthologies like it in the future.

Review: Song of the Deep by Brian Hastings

No. 18 – 2013Jun02 – C.J. Cherryh, The Faded Sun, and a World Building Ethos. The next time you look into the night sky, try finding the asteroid, 77185 Cherryh. Admittedly, it’s not an easy task. But it’s up there and named after Carolyn Janice Cherry, aka C.J. Cherryh. The discoverers believed Cherryh had “… […]

All Upcoming Manned and Unmanned Missions to the Moon | Digital Trends