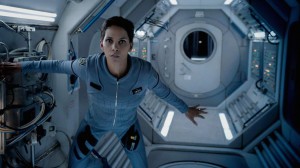 I’m a little late to the Extant table, but now True Blood has ended (sad face) I have more time on my hands to try out a new show. I wasn’t sure what to expect from Extant as the overview doesn’t give much away, but with Halle Berrie on lead and produced by Steven Speilberg I had high hopes for it.

Well, I’m only one episode in and I’m already hooked. This is not just a show about a female astronaut get back into normal life after a 13-month solo mission. Something happened to her whilst she was in space. She lost several hours and the footage from her cameras doesn’t explain what happened and what she saw, and upon returning to earth, something impossible has happened to her. That mixed with her loss of her first love and her new husband creating an AI-style son for them to settle for the lack that they can’t conceive their own, this is so far in the future, yet you feel everything she is going through is normal.

I really hope this doesn’t go the way of Lost or Heroes…or so many others of those sci-fi shows that start off so well and then go on to disappoint.