Traditionally, episode 9 of Game of Thrones has been The Big One. Something HUGE happens which has been building up for an entire season and so it is looked forward to by all with glee, mirth and a lingering sense of dread. In season one, it was Ned Stark’s head being sliced from his body, in season two, it was the amazing singing of Bronn the sellsword (sorry that should have read: the battle of Blackwater Bay) and last night the infamous Red Wedding.

The Red Wedding, for those who have read the books, is one of the highlights of the entire series: the brutal massacre of the Stark clan. This episode was named The Rains of Castamere because that tune plays to signal the start of the bloodshed. And it is bloody. Pregnant Talisa is stabbed a half times in the belly and left to bleed, Robb Stark watches her and his possible son die before his own throat is cut. All Catelyn can do is scream, slit the throat of Frey’s wife whom she holding hostage and that was the problem. 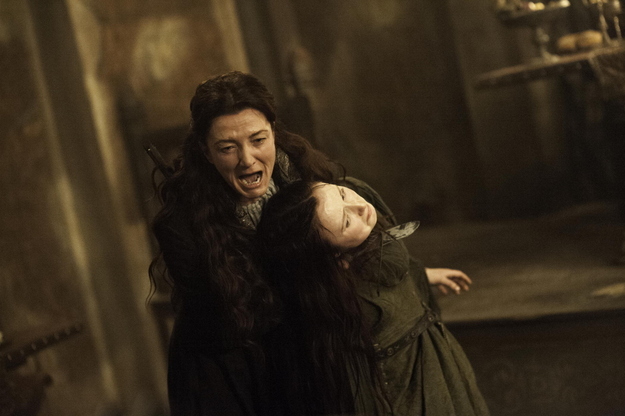 I knew Catelyn and Robb were going to die. It’s inevitable, especially as not all stay dead. Catelyn’s dies before her throat is slit, the lingering pan of the camera catching the moment she screams and the light of compassion, of motherhood, dies. When we see her again, she will not be Catelyn Stark any longer but something much darker and just as tortured.

The wait, the second dripping by made the tension inevitable but that wasn’t the point. We had to watch the Stark matriarch die in soul before body. Yet when the random sellsword came and slit her throat, it seemed to easy, almost an afterthought. Of course, the shock played into the silent credits, no music today but the memory of the murder of many, from the King of the North to his noble direwolf.

We had snippets, of course, of other characters and they hurt even more because each had fleeting glimpses of others. Bran nearly ran into Jon Snow whilst Arya arrived at the Twins just as her mother is murdered and watches a bowmen kill Robb’s wolf in the stable. Everyone wanted a happy ending or at least a much-pined for meeting: for Jon to realise his half-brother was alive, for Catelyn to see her youngest daughter again but it was not to be. That is why Game of Thrones is so awesome, because everyone we care about, every character we’ve grown to know on their individual journey, they’re not safe. Any moment could be their last and breaking that – previously inviolate rule – is what makes this TV show one of the best currently airing.

Now though, it’s time to deal with the aftermath, as is the tradition. Will we see Stoneheart? Perhaps. Will Arya begin her travels across the Narrow Sea? Maybe. How will we cope with a year before the next series? I have no idea.