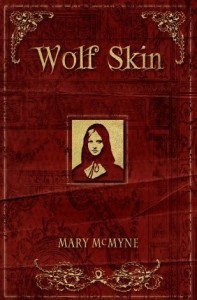 I don’t know how long it’s been going on, but a lot of Alternate Fairy Tales come into my To-Read-and-Review Inbox. (I know I said that about Horror Poetry too, but it’s true, these are the two main sub-genres I receive, and sadly, little actual Science Fiction Poetry.) Like most people, I’m familiar with most Fairy Tales in a basic way, but unlike many people in the writing biz I didn’t grow up with an intimate love of them borne of the possession of some beloved volume. Additionally, I believe I basically grew up knowing merely the Disney Versions! Oh, the horror! The poor deprived soul! (I can just hear you now!) I know. But as an adult I have indeed remedied that by reading much of the Brothers’ Grimm (in German) as well as others, albeit less systematically, and have perhaps delighted more in the alternate versions by modern writers as a result. Would I like these twisted fairy tales at all if I had a beloved “original” version that I’d known from childhood? And no, Disney doesn’t count, because while I love those movies, it is not at all a stretch for me to realize that they are almost unrecognizable when compared to the originals. I’m much less forgiving when it comes to adaptations of books and stories.

My re-education, as it were, stems mostly from poetry not novels, although I’ve read a few novel-length retellings – most notably Beauty, by Sherri Tepper and Briar Rose, by Jane Yolen. But I love the succinctness, the brevity of what it takes to subvert a well-known fairy tale in a poem. I love what a capable poet can do to give a character added depth, more back-story, which totally changes your emotional attachment or simply to re-invent the tale altogether, spinning it onward from the traditional ending or telling it from an alternate point of view, in such a narrow space. Mary McMyne is one of these capable poets.

Mary McMyne begins and ends Wolf Skin not with alternate fairy tales, but with poems about those ethereal winged creatures: Butterflies (and moths). They are not fairy tale creatures in the least, but I think she uses them in a way which mimics our feelings toward the characters found in fairy tales. Fluttery, flying creatures serve the same purpose, meaning that they’ve become Fairy Tale Creature allegories for some innate desire – mostly of Flying. 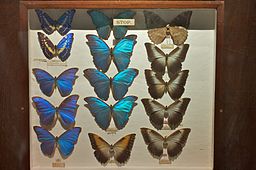 The 3 butterfly poems at the beginning trace three aspects of the life of a butterfly. First, of a woman’s foreshadowing of butterflies’ doom when she visits a sanctuary with her children. A favorite line from “The Butterfly Dome”:

Upside down, along the walls, they twitched a thousand shades of green, reds brighter than blood, the yellow of gold.

Then, of a collector (from “Lepidoptera”):

And finally, of the butterfly in danger. Listen to the poem in full:

The final poem of the collection creates a perfect bookend depicting a butterfly escaping from the collector’s display. “Love”:

is an insect taking wing from corkboard,

sloughing off formaldehyde, the ping

of pin, the flutter of label to floor. Love

But these poems are so much more than just about the butterflies. She uses the images to illuminate the dichotomy between the act of capture and preservation, and the necessity for releasing and letting go of that which we love and the resistance to it that we all feel.

The rest of the chapbook of 19 poems in total is mostly based on Little Red Riding Hood and Rapunzel, with 4 poems each and a couple of random tales. They give light to a number of hard truths about human nature and our experiences of trauma or tragedy, which actually then give comfort.

Several of the poems taunt us by making us think they are about one thing, Little Red Riding Hood, for instance and end up being about something altogether different. Take “Fur” for example. Listen:

Poets often take a familiar story and tell it from another character’s point of view. It may be a father’s, a mother’s. or as in McMyne’s “Old Woman Gothel” for instance, we get Rapunzel’s captor’s side of the story, and discover she’s not as evil as we thought, just lonely. Read the poem and listen to McMyne read it herself on The Pedestal Magazine:

Sometimes we are presented not with the familiar story, but with an account by the main character, in this case Rapunzel. It’s quite different to the story we know. Listen: 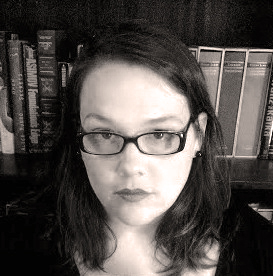 Mary McMyne is a writer, poet, editor, and professor in northern Michigan. Her stories and poems have appeared widely including or soon in Los Angeles Review, Pedestal Magazine, New Delta Review, Midwestern Gothic, Apex Magazine, and Poetry International. Her poetry has been nominated for the Pushcart Prize and Rhysling Award. Since 2011, she has lived in Sault Sainte Marie, Michigan, where she is an Assistant Professor of English and co-editor of Border Crossing at Lake Superior State University. Before joining the faculty at Lake State, she taught writing and literature at New York University, New Jersey City University, and other institutions. She is currently at work on a novel. She can be found as @MaryMcMyne on Twitter.

The chapbook itself is a lovely thing by dancing girl press & studio, editor Kristy Bowen. “The dancing girl press chapbook series was founded in 2004 to publish and promote the work of emerging women writers and artists. Spawned by the online zine wicked alice, the series seeks to publish work that bridges the gaps between schools and poetic techniques – work that’s fresh, innovative, and exciting. The press has published over 200 titles by emerging women poets in delectable open-run handmade editions.” (from the publication page of the chapbook) The cover design by Alisha Camus is very evocative of a 19th century leather-bound volume with golden in-lay accents and is printed on card stock. 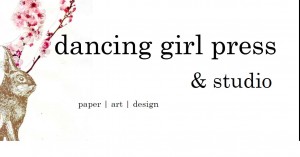 Thanks for joining me! Next time I’ll be interviewing Crowd-funding Poet extraordinaire: Elizabeth Barrette. See you then!