The premise might be a shameless re-hash of the American classic Cat People, but the 1957 film Cat Girl can claim to be an under-appreciated landmark in genre cinema, at least among British films.

Its first claim to fame is that it was the first horror film to go into production after the industry-changing success of Hammer Films’ The Curse of Frankenstein.

Secondly, it introduced cinema-goers to Barbara Shelley, one of the most talented and fascinating performers ever to be linked to the genre.

And thirdly, as commentators more astute than me have noticed, it was the film that brought sexually active women into horror cinema, with all the dangerous implications that carried for the censorious morality of the time. 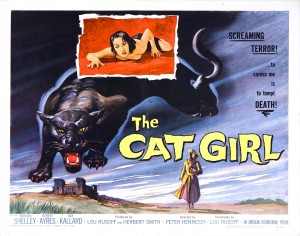 Lou Rusoff’s script begins by borrowing from another horror classic, The Old Dark House. We are introduced to Edmund Brandt (Ernest Milton), a strange elderly gent who keeps a leopard as a companion in his gloomy mansion, and who is muttering about the imminent visit of his niece.

The niece is Leonora (Shelley), who is first seen having a stiff drink in the local pub before she heads to the ancestral home. Shelley’s character initially has an almost catatonic air as she contemplates her imminent return to the family home.

When Leonora, along with her obnoxious husband and two vacuous friends, arrives at the family mansion, we learn the nature of a curse that afflicts the family. The Brandts have some sort of mystical connection with wild beasts, and on old Edmund’s 70th birthday, this burden will be passed to his niece.

As the family legend has predicted, Leonora suddenly develops some sort of psychic link with the leopard, which promptly mauls Uncle to death. If she resents or despises someone, the beast do her subconscious’s bidding by attacking them; but she has no ability to call it off.

Before long, the leopard has killed her unfaithful husband, and Leonora is keen to turn herself in to the police – or, better, still, into the care of the psychiatrist Brian Marlowe (Robert Ayres), whom she has loved for years.

Leonora is duly committed to a very austere London asylum. Even behind its barred windows, she is tortured by her link to the leopard, which lurks outside. Marlowe is determinedly slow on the uptake about what is going on, and is so blithely confident in his abilities to cure Leonora that he has her released into his care. Even more ill-advisedly, he promptly leaves her alone with his wife Dorothy (Kay Callard), whom Leonora deeply resents.

It’ is very clear that we are heading for a climax in which Dorothy will be in deadly peril at the hands of Leonora’s barely repressed impulse to commit jealous violence.

A synopsis of Cat Girl might make it seem like Cat People without the subtlety. Unlike the Jacques Tourneur-Val Lewton classic, it leaves us in no doubt about what is going on with Leonora. Her repressed anger really does control the big cat and there is nothing she can do about it. The debt to the earlier movie is underlined when one scene begins with the appearance in the frame of a double-decker bus – an echo of a brilliantly timed moment that makes audiences jump in the Lewton film.

Alfred Shaughnessy’s direction, however, overcomes the limitations of the story. He makes the old dark house immensely spooky, the asylum believably horrible and the streets of London memorably shady and unsafe.

But it is the star performance that will linger in the memory. Shelley would go on to become a genre favourite, usually in parts in which she would display an icy exterior concealing a raging sexual potential – most obviously in Dracula Prince of Darkness and Rasputin the Mad Monk.

That combination is already present here, in her first British film. She is almost zombie-like in the early scenes, when she is petrified about the prospect of returning to her family home. Early on, we learn that she sleeps in the nude (though not in the same room as her husband), despite being the owner of a Victorian-style full-length nightgown – and although this might be just so that the director can titillate us with a shot of her bare back, it adds to the sense that this woman, emotionally dead on the surface, has a repressed sensuality.

Whenever she is functioning ‘normally’ according to the rules of society, Shelley is expressionless and devoid of joy; when she is tortured by the nearby presence of the leopard, she is full of violent rage. In one memorable scene, she explodes into fury within the confinement of her room at the asylum, tearing at her clothing in torment at the conflicting forces within her.

David Pirie, in his landmark book A Heritage of Horror (revised as A New Heritage of Horror), sees Leonora’s reaction to the leopard’s attack on her philandering husband as something hugely important: the point when sexually active women exploded onto the British cinema screen. There had been none of that in The Curse of Frankenstein, but there would be in Dracula the next year. Pirie says this first metamorphosis in the film is “a crucially liberating moment in British cinema”, adding that “another genie had been released from captivity” and that versions of the unleashed Leonora character would reappear in countless horror films over the next twenty years. It is difficult to add anything to Pirie’s observations, except that he is absolutely right.

Pirie quotes Audrey Field of the British Board of Film Censors, who made one of the laughably uptight yet revealing remarks that the BBFC was so adept at in those days: “It is a pity that they have chosen a woman as the central character as it makes the story rather nastier.”

Cat Girl could so easily have been a ridiculous British imitation of an American classic, yet it transcends its copycat origins to become a fascinating movie that tells us something about the repressive era in which it was made. The Region 2 DVD from Network is an excellent release, and this is a film that should be seen by anyone interested in UK genre films.