The eighth season of The Big Bang Theory continued immediately after the season debut with “The Junior Professor Solution.” Sheldon raises the claim that Stalin wanted to create super soldiers by breeding humans and gorillas, which led to a discussion about what animals should be cross bred to create super soldiers. Although Leonard suggested hippos, as the “deadliest animal,” Sheldon declared that the real animal would be a koala because nobody would attack an army so cute. When Sheldon declares the conversation over, Howard asks Penny about her new job and Bernadette is concerned that Penny is preparing herself properly. Bernadette is clearly concerned that a poor performance by Penny would reflect poorly on her, saying that being the teacher’s pet couldn’t hurt. Leonard points out that practically everyone in the room was hurt at one time for being the teacher’s pet.

Back at the college, Sheldon visits the HR rep to discuss his continuing study of string theory. While he was away, the university came up with the idea that if they promoted him to a Junior Professor position and gave him classes to teach, he could change his field of study. When informed of this, Sheldon, showing more self-awareness than usual, points out that they might not want to reinforce the idea that pouting and running away will allow him to get his way. 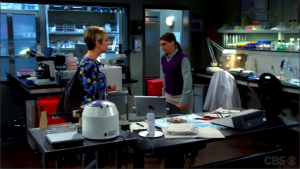 Penny joins Amy for lunch, and Amy is surprised that Bernadette won’t be joining them. Amy points out that based on Penny’s job as a waitress (“stunningly poor”), it isn’t surprising that Bernadette doesn’t have a lot of confidence that Penny will do a good job as a pharma rep. Amy isn’t comfortable talking about Bernadette behind her back since Amy is used to being the person talked about. At the same time, Amy loves the idea of being one of the gossipers.

Raj’s difficulty of trying to come up with a cute “couple name” for himself and Emily is interrupted at the cafeteria table by Sheldon arriving and expressing his annoyance with having to teach students, although based on his previous experience in the classroom in the fourth season episode “The Thespian Catalyst,” it is surprising that anyone would think that putting Sheldon in front of a classroom is a good idea. Leonard, Raj, and Howard try to point out the good points of the appointment, but Sheldon doesn’t quite buy it.

Following lunch, Amy is back in her lab working on starfish serotonin levels in response to pleasure. Bernadette Skypes her and invites Amy to join her for a drink without Penny since Bernadette is frustrated with Penny’s lack of preparation. Just as Amy responded to Penny talking about Bernadette, she has the same response to Bernadette talking about Penny, reveling in her role as spoiler. 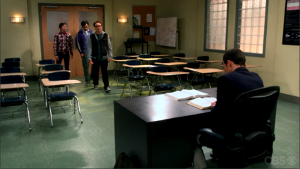 When Leonard, Howard, and Raj stop by to visit Sheldon’s class, they find him sitting at a desk reading in an empty room. Rather than having sent everyone out of the room, nobody signed up based on Sheldon’s obnoxious reputation. Feeling sorry for Sheldon, Howard offers to take Sheldon’s class. Raj and Leonard look at him in disbelief while Sheldon disparages Howard’s intelligence, but determines that Howard might actually have some signs of intelligence that Sheldon had previously not seen, although he doesn’t believe Howard’s claim that engineers are just as smart as physicists.

Amy realizes that she is in the middle of a high school social dynamic that she missed when she was a teenager and tries to share her excitement with Sheldon, who is busy preparing a lecture for his class of Howard. Rather than trying to teach Howard, Sheldon’s lesson plan is to make Howard feel as inadequate as possible. Leonard asks Sheldon why he feels he must belittle other people. Sheldon, however, is too self-obsessed to

seriously consider what Leonard said. Warned by Leonard of Sheldon’s plan, Howard tells Sheldon that he will drop the class if Sheldon doesn’t take it seriously. When it is clear that Sheldon is not working to teach Howard, Howard retaliates by being as bad a student as Sheldon is a teacher. Sheldon’s wonderful use of a spitball may be the highpoint of the episode, possibly the season.

Amy revels in newfound relationship with both Penny and Bernadette and calls Penny to make plans for the evening. When Penny says she plans on studying, Amy sees her position slipping away and tries to convince Penny that Penny should blow off studying and Bernadette. Bernadette also turns down Amy’s invitation because she’s going to help Penny study instead. When Amy learns the two are talking together and everything is back to normal, she is disappointed that she’s lost her status.

Sheldon, meanwhile is concerned about the damage the spitball has done to him and Howard discovers that Sheldon reported him to HR, which caused Howard to drop the class, a sign Sheldon reads as Howard admitting that he isn’t smart enough to study physics. Howard turns the tables by asking complex engineering questions to Sheldon to demonstrate that what Sheldon was doing didn’t prove anything except that Howard didn’t know physics yet. Unfortunately for Howard, Sheldon knows the answers to his question. 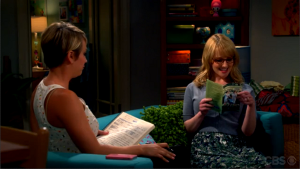 Across the hall, Bernadette is quizzing Penny on the drugs she’ll be selling. The dichotomy between Bernadette helping Penny learn and the antagonism Sheldon has towards Howard’s desire to learn forms a fantastic crux to the episode and leaves Amy, who was listening at Penny’s door, back on the outside as someone who was being as supportive of her friends as Sheldon was towards his, while rejoicing in her own power. 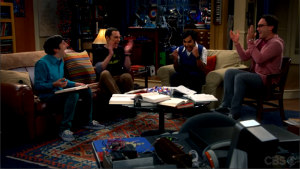 The four boys sit around the table quizzing each other on science and giving each other chocolates when they get an answer right, even if it isn’t related to science.

Fannish culture isn’t highlighted in this episode, but it does play off the science background that the characters have in order to spotlight the difference between Sheldon and the more helpful and less egocentric friends.