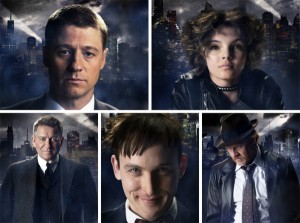 So the new prequel to Batman, Gotham might not be hitting screens for a month or so, but UK TV Channel 5 which has signed up the show this week released an exclusive first look at what we can expect with an introduction from leading actor and former The O.C. star Ben McKenzie.

I’ve talked previously before about the earlier trailer, where it appeared that some of the future baddies would be making appearances in the show, like they did in Smallville, but it was unclear if they were all in it from the start or would just be popping up as the series progresses.

Well from this exclusive look I get more of a feeling that we will see the majority of them pretty early on, and some will be appearing in the show as regulars, Penguin and The Riddler to name just two. Whether or not Bruce Wayne is just a guest star or not in his own tale is another story.

I have high hopes for this show. Going down a Batman prequel ran the risk of mirroring Smallville, although slightly darker, but focusing on Commissioner Gordon back when he was a young detective is a great way to showcase the sin city that was Gotham before Batman came on the scene to protect it. Are you looking forward to this show?