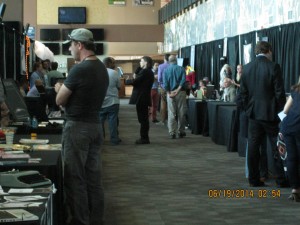 There were some big happenings going on in Nashville, Tennessee recently. Film-Com just had their New Project Expo with SF and Horror genres being a main attraction in the world of Independent film making.

As a brand new filmmaker breaking into the industry I can tell you the excitement is at a continual rush of energy at this event. It’s not enough to be on set and to feel the exhilaration that comes with pooling talent while making a film. The exchange that happens in a huge networking program such as Film-Com is equally high key. The conference is not just a film festival. Instead it is a “a world class event, with attendees traveling from China, Australia, South America, Africa, Russia and the UK as well as all across America. They come for a variety of reasons, but central are the networking opportunities, opportunities that focus on putting filmmakers in touch with domestic and foreign distribution companies, equity financiers, lender capital, P&A funding, gap financing, co-production partners, packaging agents, production integration specialists and more.”

The organizers of Film-Com do an excellent of getting panelstogether for teaching the art of pitching a film, and preparing a project for an audience of professionals. And when the big day happens, the networking is incredible.

I asked Andy van Roon, Chairman and General Manager of Film-Com to give us some insight to the event and he cheerfully obliged in the following interview.

Andy, thanks for taking time out of your busy schedule to give us a breakdown of this exciting event. 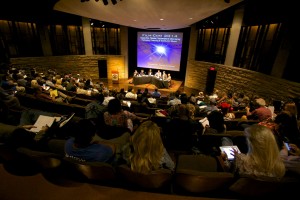 Q. How did Film-Com begin?

Film-Com began as a direct result of fulfilling a need that most independent filmmakers have to directly interact with industry professionals connected to packaging, financing and distribution. The usual contexts that filmmakers encounter are large business markets where film companies are either trying to sell the SF, horror, thriller or other genre films that they already have to US and international buyers; or the usual problem that filmmakers encounter when they attempt to go to L.A. and try to set meetings with execs at major studios, networks or production companies, where the filmmakers quite often feel very intimidated by the meeting, while the person they’re meeting with is often checking their watch.

Film-Com has been deliberately designed to bring in working industry professionals who are actively in the trenches of constructing deals, and who are only invited to participate in Film-Com with the understanding that their purpose is to directly interact with Film-Com content creators over a span of four days and nights. Film-Com came into being in order to provide real access to industry professionals who can actually make a difference, and who actually care.

This year we had financiers specializing in the sci-fi and horror genres, including Elijah Wood’s company, SpectreVisiion, Marlon Schulman’s Horror Equity Fund and others. Our visiting producers include people like Michael Uslan, exec producer of Dark Knight Rises and all the Batman films: Gil Adler, producer of Constantine and Tales from the Crypt; Mitchell Galin, producer of numerous Stephen King projects, 80 episodes of Tales from the Dark Side, the Dune mini-series for SyFy and numerous other works. 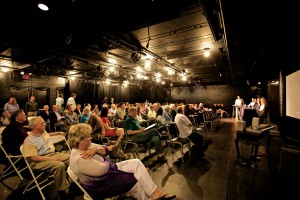 Film-Com’s straightforward vision is to provide pragmatic bridges for creators of new feature film, scripted television, unscripted television, documentary and video-gaming concepts, so that those content creators can get help packaging, financing and distributing their projects, and earn revenues on their projects from both US and international sales, in the hopes that their investors will earn a profit and that the filmmakers themselves will be able to at least partially self-capitalize their next projects.

Q. What do you see in Film-Com’s future?

We are excited about expanding into all genres of feature films, television, and now video-gaming and transmedia concepts, including sci-fi, fantasy, horror, thriller, action, and quality drama and comedy. The hardest projects to finance, actually, are comedy, simply because about 65% or more of any film property revenues these days are based upon foreign sales, and interestingly enough, the sense of humor varies significantly from culture to culture, while sci-fi, fantasy, horror, action-adventure and crime stories translate and sell well across all cultures. Film-Com and its partner events in Filmolution have now expanded to a ten-day schedule — our dates next year are June 12 to 21, 2015. Our partner events are Score-Com for composers, Script-Com for screenwriters, Faith in Film Conference for that growing genre, a New Project Expo at Titans Stadium, our annual Packaging, Financing & Distribution Summit, annual industry networking gala, pitch sessions, Women in Film & Television workshops, and we’ll be adding a Latino Cine.TV Conference, as well as a day for actors with Hollywood casting directors. We have more industry execs and more financiers participating every year, so Film-Com will probably continue to grow over the next few years to create opportunities for great new projects like Cassandra’s Castle.

Thanks so much for your answers (and for mentioning Cassandra’s Castle!) I hope to see you next year in Nashville!

Ricardo Manzanaro posts the rules to a Spanish science fiction and fantasy writing competition and tells us about the reissue of the novel The Protector.