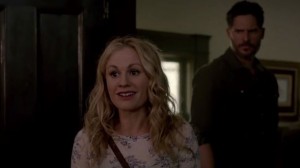 So True Blood returned for its final season and what an opener. As with every season, the ‘previously on’ is not enough for my memory to recall what happened at the end of the last season. So it took me a while to process everything. But the most shocking opener for the show, was not the lack of Eric in the first episode but *SPOILER ALERT* the fact that Tara was killed! And killed within the first five minutes of the show.

The town is in the middle of an outright war. The humans want rid of the vampires and many vampires are out of control, making the good ones look bad. Pam is traveling the world looking for her maker Eric, Jason finally gets to sleep with the vampire he has been following around like a love sick puppy, and Sookie is with Alcide, but struggling with the town blaming her for what has happened.

I think it is the right time for the show to go, but it is great to see it back to the great form that we fell in love with when it first started. I hope that it does go out on a high having us gagging for more.