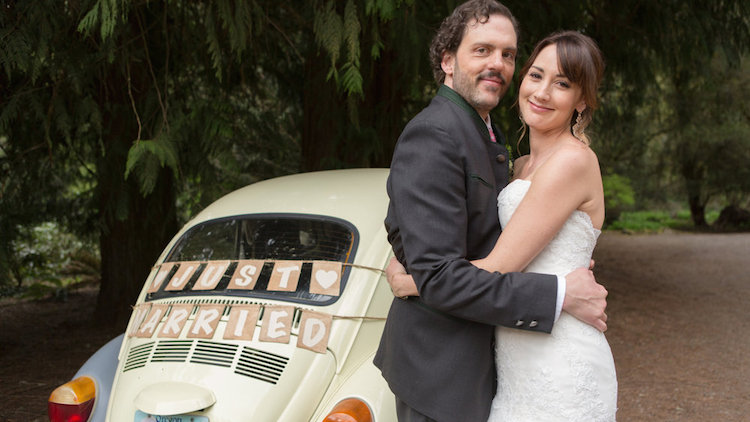 Grimm’s third season ends with fireworks – a Wesen wedding and some serious repercussions for some major characters, leaving us on unsteady ground. For TV fans, May, not April, is the cruelest month.

The third season of Grimm has been ramping up the intensity for a while, with the introduction of another Grimm, Trubel, the birth of Adalind‘s baby, and the intrigue with the royal family; Monroe and Rosalee’s engagement. More and more people are in the know; Hank is a conspirator, at this point, and wisecracking Wu lost his stuff, earlier in the season, after seeing an old Philiphino fairy tale. The action never stops, on Grimm, leaving you to wonder if they would finish with a bang, or a whimper.

Thankfully, Grimm didn’t disappoint, and actually seems to be getting better, as it goes along.

This is largely due to a breakneck pace; certain stylish, stylistic choices in the cinematography, good acting and likable characters. Because Grimm is, at the end of the day, is about interpersonal relationships, even if some of those persons occasionally turn into human-sized foxes or wolves. This is important, because without the suspension of disbelief, or caring about the characters, the show would fail utterly, becoming an NYPD Blue with kung-fu fighting werewolves, which would be terrible.

But when you choose to care about the people, Grimm is actually quite wonderful, and is doing more to infiltrate mass consciousness with horror memes than 1000 blood soaked atrocities.

Although I would not necessarily describe Grimm as Horror as much as a supernatural thriller or detective drama, it is still dealing with monsters, shape-changers, which places it in the fantasy trajectory, and can be read into as such. But the action and even the fantastic elements are intercut with personal moments, that make the characters some of the realest on television, and provide some wayward cultural commentary. Look at Monroe’s parents’ reaction to the ‘inter-racial’ union, with Monroe’s dad playing the part of old-school bigot. In a way, the scene at the rehearsal dinner for Monroe and Rosalee’s wedding, with Wesen, Grimm and Kehrseite-Schlich-Kennen toasting around a table together, may be the ultimate symbol of 2014 on TV.

It is these personal interludes – like a last minute scramble to find a wedding dress for Rosalee after a drunken mishap with her sister, that spare Grimm from being a senseless Testosterone-fest, and make the action that much sweeter when it happens. Which it does. And often. And it’s really GOOD action, with smooth martial arts delivery from all involved, which, again, does a lot for infiltrating the communal unconsciousness with the fantastic and supernatural. The fact that Grimm gets a Friday night slot just goes to show that people are ready for it. We are ready to reveal the beast inside of all of us. We are ready to show our dark hearts.

I’m not going to reveal many particulars about ‘Blonde Ambition’, as the mystery and suspense is essential to the viewing pleasure. I’ll suffice it to say that not a lot of the longer story arc is resolved, leaving things in a very tenuous position for the main characters. As I previously alluded to, several of the main characters are left on very shaky ground, which suggests that Grimm fans will be counting the days until it’s return.

Grimm is a fun fantastic drama, that has a lot to offer fans of the Horror genre, even if it is harebrained action, at times, and often camp as hell. That’s part of the fun. The series has a never-ending supply of nasty creatures to belch up, and I, for one, am glad to see them mining the Germanic mythology for source material, which is proving to be a very rich vein. Being a Portlander, it is fun to trainspot the locations, and most of the actors are faces around town, so if you ever want to imagine the night-stalked streets these bloody missives are inspired by, here’s your visualization.

If you’re already a fan of Grimm, summer will be particularly unbearable. We’ll all have to go back to watching our Hammer House Of Horror re-runs. If you haven’t yet discovered the pleasured of clock-making werewolves and shape-changing tapeworms, take the off months and start at the beginning. It’s a ride worth taking.

You can watch the season finale, along with several other full episodes, at NBC’s website, and explore a virtual trailer and spice shop!

How many Grimm fahns we have out there? What’d you think of the finale? Of Season 3?