Someone could write a book—heck, someone probably has—about the different ways giant robots have appeared in Japanese popular culture. Some of the differences are miniscule, and of interest only to hardcore fans. Some series, though, made changes that produced a significant and permanent impact on the genre.

Mobile Suit Gundam was one of those series and Vertical Inc. is reprinting a manga adaptation of the story that introduced Gundam to the public. The fifth volume in the series, good-looking hardcovers with both color and black-and-white art, came out in April. 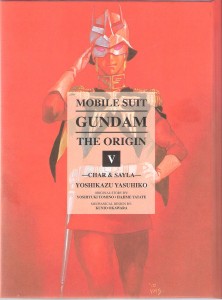 When Mobile Suit Gundam premiered on TV in 1979, the giant robot story was already an established part of Japanese popular culture. And it looked like “Gundam” was going to follow the established formula for that sort of story…at least at first. The giant robot was more like a suit of powered armor, like the ones in Robert Heinlein’s novel, Starship Troopers, but it was still being piloted by a teenage boy, Amuro Ray. In this case, though, Gundam would not be fighting Godzilla-like monsters. It would be fighting other humans.

Creator Yoshiyuki Tomino and his animators—who went under the group pseudonym Hajime Yadate—created a future world where huge numbers of people had migrated to space, to live in gigantic space habitats similar to the ones proposed by Gerald O’Neill. (If that reference doesn’t ring a bell, Babylon 5 bears a strong resemblance to an O’Neill colony. ) This is such a profound event, a new calendar is started; mankind now lives in the Universal Century. This new time becomes a time or war, though, when the Zeon Archduchy, a confederation of habitats, declares war against the earth. One of the leading Zeon pilots is Char (sometimes “Sha”) Aznable, a masked figure whose motives are unclear.

Japanese Pop Culture Expert Frederik Schodt explained it this way in the early 1990s: “Because (pre-Gundam ) shows were essentially commercials for toys based on the robot characters, they had to show robots in absurdly dramatic poses in as many action scenes as possible…(Tomino) paid attention to the laws of physics and the limits of believability, and introduced characters that were difficult to pigeonhole as simply good or evil.”

Like the original Star Trek, Mobile Suit Gundam did not exactly set ratings records in its first run. However, also like Star trek, once the show went into reruns, older audience that Gundam was intended for found it, and made it a hit. Since then, well over a dozen animated movies and TV shows have worn the name Gundam. Some of these stories used the themes and some terminology from the original (there are a lot of surrogate Chars out there) but weren’t direct sequels . They were closer to reboots than anything else. One the other hand, the Gundam franchise kept returning to the original timeline. In fact, Gundam Unicorn, the most recent addition to the franchise, is set in the Universal Century.

(Ironically, since Tomino and his animators were trying to transcend the restrictions placed on them by the toy makers, the popularity of the Gundam models helped to keep the concept alive. Barnes & Noble recently started carrying Gundam models in their stores.)

Besides being a great read, the adaptation of Gundam’s origin from Vertical has a great pedigree. It was written by Yoshikazu Yasuhiko, one of the animators who worked with Tomino on the original series and the driving force behind Venus Wars and other projects. These books aren’t cheap, but if you’re a fan of military science fiction, space opera or anime in general, you might want to check them out.