Home Film/Televison The Flash, Arrow Spin Off – Are You Excited? 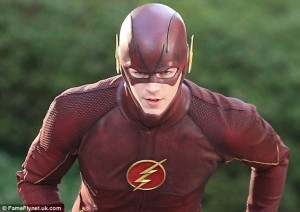 So The Flash has got a trailer. I never was really a fan of Grant Gustin (who plays the Flash) fro, his time in Glee, but then his character was never meant to me liked anyway. But, despite my lack of interest in him as an actor, I did quite like the budding romance between him and Felicity in Arrow, only for him to be ripped from her (before I realised he was getting his own show).

Well, now said show, The Flash, has a trailer, and I have to say it promises to be as good as Arrow. Although, Arrow has not impressed me as much this year, no more Oliver Queen work out scenes, and far fetched storylines, ok Smallville was full of those, but Clark was from another planet so I think they were mild compared to his story. But, from what I can see from this trailer, it is as promising as Arrow started out.

Check out the trailer for The Flash below, what do you think?