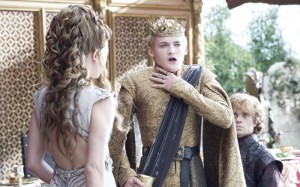 After the Red Wedding episode in Game of Thrones season three I decided I couldn’t cope with the shock and decided to pick up the books and start reading (just from that chapter onwards) as I didn’t want to be in that much shock again. And lord help me if I wasn’t prepared for another Stark death and it would be the end of my world if there was no more Jon Snow.

However. Having finished the third book and ready for this season to start. I felt prepared and eager for the show. But when I watched this week’s episode, with everyone avoiding spoilers of the major drama that happens, I found myself knowing immediately from the start of the episode that I knew what was about to happen, and just spent the rest of the episode wondering exactly when it was going to happen. No shock, no drama. Just a hurry up and get to the point. And then, being the imaginative person that I am, feeling slightly disappointed that it wasn’t the way I pictured it in my head. I love a good book, but I love seeing the adaptation more and I don’t like to be disappointed.

So I have now decided I will go back to my knowing nothing. I have stopped reading the next book and I will instead await the shock of what will appear on my screen…until the next major shocker! So are you ready to be shocked or prepared for it?