Home Film/Televison Save the Cheerleader, Save the World! 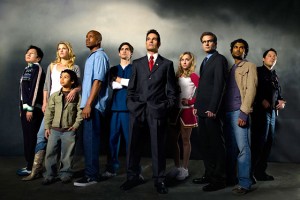 With the Heroes mini series set to be released next year, it gave me an itch that I couldn’t scratch with a need for some more of the show, so I hit up Netflix and started watching the show from the start again. “Save the cheerleader, save the world!” I forgot how amazing the first series is. All these heroes, all their paths crossings, the connections and not knowing the answers to everything.

Luckily it’s been long enough since I first watched the show so I’ve forgotten some of the storyline (but not all). This however does mean that the cliffhangers are still getting me so watching back-to-back episodes is a little too easy.

I also forgot how much I loved the characters. Peter Petrelli. He has the most amazing ability, to pick up other peoples powers, he has all these skills, yet he is such a soft/push over guy they almost seem wasted on him. But his opposite of Sylar, who takes the powers from others by taking their brains is someone that you know is using every single power and not in a good way.

Remembering how incredible their powers are however just reminds me that the journey of this show does get a bit rubbish, which is why the show got cancelled. And now I’m on to season two again, and still enjoying it,I just wonder how long until I get fed up with the show.

My hope for the return is that the show goes back to the awesome start. Not a refresh, but brings back the ‘OMG, I NEED to see what happens next’ element of what made the show so great.