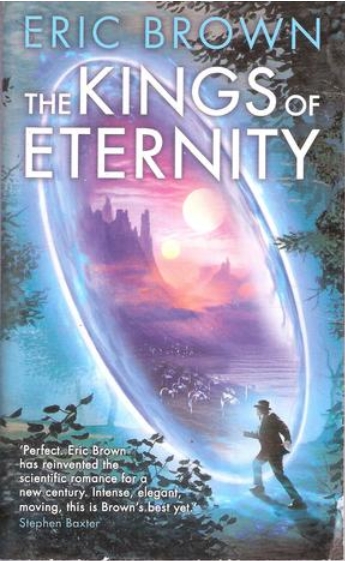 Eric Brown’s book is about writers. In 1999 Daniel Langham is living in self-imposed exile on the Greek island of Kallithéa. He is an acclaimed literary novelist, troubled that the success of his books has attracted the attentions of an unofficial biographer who may have blackmail in mind. When we meet Daniel he is in the midst of a nightmare, hunted by a reptilian alien assassin. On the next page he uses his mereth to determine that the ‘Englishwoman was, then, what she claimed to be,’ and after these hints of the fantastic Daniel’s story unfolds for a long time as a tentative love story. The Englishwoman is Caroline Platt, an ex-patriate artist. Coincidentally or not she owns first editions of all Daniel’s novels. Can Daniel trust her, and equally, can Caroline trust Daniel?

Alternating, rather longer chapters, take place in 1935 and later years. Jonathon Langham, Daniel’s grandfather, is a young novelist patterned after Lawrence Durrell. At the beginning of his story he is worried by the lack of success of his first three books and involved in an affair with a French actress, Clara DeFries, a relationship made difficult by his jealousy. Worst of all is the news that Jonathon’s father is terminally ill.

Welcome relief from all these troubles comes with an invitation to his country manor by old friend and editor Jasper Carnegie. Also invited is the science fiction writer Edward Vaughan, and soon the intrepid trio is investigating a mysterious blue light and strange figures in Hopton Wood. Of course at this point one might think of Robert Holdstock and Ryhope Wood – aka Mythago Wood – while the very name Edward Vaughan summons the essence of 20th century English pastoral romance in the figures of Edward Elgar and Ralph Vaughan Williams.

To say more would be to spoil the immense pleasures of discovering Eric Brown’s ingenious, very English plot. The Kings of Eternity is a scientific romance in every sense. It is a homage to classic pulp science fiction. It is a melancholy exploration of the British artistic soul (readers of Brown’s Meridian Days and other novels will be familiar with his ‘colony’ of ex-patriot artists), a tender love story, or two, and in the final chapters an exciting thriller. Brown most affectingly manages the difficult feat of fusing a realistic novel of character with some joyfully bold genre tropes. The result, minus a couple of continuity errors which should have been caught in the edit, is a thoroughly entertaining, civilised and gripping read.

The Kings of Eternity is published by Solaris Books. You can read my interview with Solaris’ editor-in-chief, Jonathan Oliver here.

How Are You Telling Your Story?…Part 1: Viewpoint