My last posting, it seems, touched a raw nerve, by including sexual deviancy in the mix of behaviors we might not overlook, if it were not for an artist’s superior gifts. So let me be clear: It isn’t a matter of this behavior or that, being the deciding factor in judging an artist’s morality to be wanting. The issue here is whether “great” men (or women) do or should get a pass for behaviors or opinions we would find unacceptable in “lesser” men/women. And my answer to the former is “yes” they do, and to the latter “I think it’s a question worth exploring, even though I know (and as I predicted) the discussion is going to be difficult” 🙂

This is not a subject I get to think about very often, because I am a member of the SF/F community—and ours is known to be a very tolerant and liberal group. And I could just fall back on Social Identity Theory to explain why fans are so divided on their support of Orson Scott Card.  But the issue caused me to think on this, and “how far I personally was willing to go” in supporting a person of superior artistic gifts when their values and beliefs were antithetical to mine.  Would the “art” always trump whatever I might think of the “man”?  I have never judged Art I collect on that basis, but could there come a time when I would?

To repeat, just to be clear: there are dozens of examples of gifted artists who are NOT antisocial, miserable human beings.  But for those few who—as artists were great, but who as HUMAN BEINGS were NOT so great—would there ever be a line in the sand that, once crossed, would cause me to take their paintings off my wall?  For fans of Thomas Kinkade urinating in public was not enough.  For fans of Vaughn Bode, the fact that his wife and son endured what by most accounts was a dysfunctional “bizarre and tumultuous” life, was not enough. The Art created was (to fans) more important than their disappointment with these artists “as men.”

People with ideas we despise sometimes make great art, and that great art is capable of elevating us, whatever the intentions of the flawed people who made the art. That is the LONG VIEW espoused by S.M. Stirling in his response to my posting last week, and his comments are well-taken. The man lives and dies, but The Art Endures. So, short term. . .

Do we read the poetry of Ezra Pound (fascist, anti-semite, lousy father)? YES. Was he protected from the criminal justice system by those who fought to declare him insane rather than guilty of treason, thereby saving him from life imprisonment?  Also, YES. 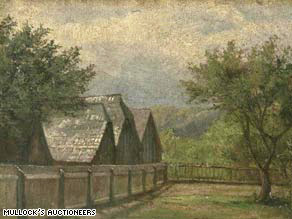 That is my point. Our willingness to judge the  ART to be more important than the man—if the ART is good enough.  I understand, for humankind as a whole, and thinking “long term” the separation of a man (or woman) from his (or her) morality is a good thing.  Because otherwise, we would never have their art (think: burned on the stake). So, locally, and “short term”—for those who must deal with such “bad men” the question seems to be…How good/ popular/ memorable does the Art have to be before the “man” is given a pass (or) we are willing to separate the man from his art?  Turns out, that is a pretty high bar.

You have to be pretty close to a genius, truly extraordinary, before it’s a matter of “without the Art, the man would be nothing”. As in: Dickens would be just another lousy father of ten without “Great Expectations.” “Lewis Carrol” would just be an every day pedophile if it were not for “Alice in Wonderland.” Etc. etc. Then again, we end up valuing the Art over the Artist, most of the time, because artists don’t have much power to exert their influence—they aren’t “leaders”—so their personal demons (as a general way to describe this) rarely do widespread damage; the effects are short term (generational) and local (friends and family). BUT THINK: what if they did have power? Would you find it as easy to separate the art from the artist? Or would it not only be impossible, but exactly what you wouldn’t want to do!!

Let’s flip this argument on its head, and see how you feel when the situation is best characterized as Without the Man, the Art is Nothing.

Just think how different the world might be today, had Hitler achieved his ambition to be a professional artist, and had been accepted, instead of rejected (twice!), by the Academy of Fine Arts in Vienna!  There he is, espousing the same ideas, spouting the same opinions, and ending up a modestly successful architect or competing with the likes of Schiele and other revolutionary artists—and ending up frustrated, bitter and depressed, out of sync with trending art movements and “misunderstood” but powerless to kill millions. Thanks to this historical fact, we get another opportunity to separate the artist from the art.  Or not. Do we judge Hitler’s “Rural Houses and Trees” art on its (mediocre) merits, apart from the man? Come on now, why not? 🙂   In what follows, I have highlighted through italics, those portions I feel are relevant to the points I am making in this post:

Westwood-Brookes, an historical documents expert speaking for the auction house Mullocks of Shropshire (UK), defended the sale of Nazi memorabilia which included original artworks by Hitler by saying “It’s just as much as part of the Second World War as photographs of (Winston) Churchill,” the British prime minister during the war. “It’s something that happened and you can’t ignore it . . . Some people wouldn’t want it,” he admitted, but some would, “mainly because they want something to do with a famous person in history. In this case it happens to be Hitler, but in another sale it might be Churchill or Gandhi”. . . “I don’t take any moral position” on the sale of Hitler-related artifacts, he said. “You can’t say this guy was a bad guy, so I won’t sell his memorabilia, this guy was a good guy so I will sell his. If you do that, where do you stop?”

Where, indeed! Well, some people have figured that out, and can tell you exactly where to stop.

“Who would want to have in their house a painting by the most horrible murderer in the history of mankind?” asked Rabbi Marvin Hier, dean of the Simon Wiesenthal Center which aims to fight anti-Semitism. “Any individual that would buy it to hang in their homes should be ashamed of themselves.”

Well, sure, you might say. The guy is a Rabbi. But doesn’t this difference of opinion sound familiar? And how is this any different from pro-Card “we’re religious conservatives here, so we’re anti LGBT?” I’m asking because when it comes to collectibles, we inevitably live on slippery slopes. And you, me and everyone else has to make a decision here, on where (if anywhere) to dig in, and hold your ground.

True: Our own government, which still holds some Hitler paintings (seized by the US Army at the end of World War II), declines to exhibit them, as journalist Marc Fisher noted in his article “The Art of Evil: Half a Century later, the paintings of Adolf Hitler are still a federal case” (Washington Post, Apr. 21, 2002, p. w.26) 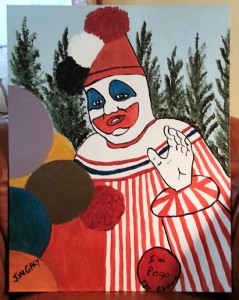 Also true: there’s an active market in Murderabilia and no one there is cautioning potential buyers that we must separate the Art from the Artist. NO. Quite the opposite. That, in fact, IS THE ATTRACTION! The “badder” the man/ woman, the more valuable anything associated with them.  At the same time, and precisely because the art would likely never “endure” without the notoriety of the creator, the idea of preserving anything created by John Wayne Gacy was unthinkable to businessman Joe Roth, who spent $7,300 to purchase 25 paintings and drawings by Gacy at auction in 1994, days after the mass murderer’s execution.  A month later he hosted a bonfire to destroy the artworks, which 300 people attended, including family members of nine victims. He was quoted as saying “I think being here today and being able to toss that stuff on the fire finally gave them some satisfaction.”

Is there anyplace where YOU would draw the line when it comes to an Artist and their Art?